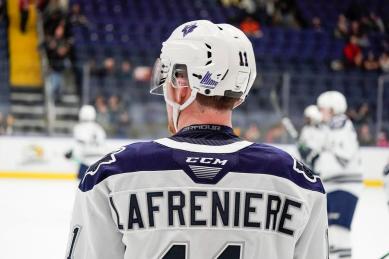 Maybe it was just me, but the minute the league announced that they’d be using placeholder spots for teams in the qualifying round, I knew one would wind up winning a top three pick. That feeling of inevitability wasn’t due to suspicion of foul play or some sort of fixed lottery but simply from knowing this league has perfected over complicating practically everything.

In and of itself, awarding lottery odds to eliminated teams wasn’t a poor choice. Given the gift on hindsight, the league probably would’ve been smarter to do a single drawing with the original odds once the qualifying round was done. Splitting the lottery was an odd choice which really only opened the door for complaints from fanbases (and probably some GMs) around the league. It will only become more unpopular if one of the stronger teams in tonight’s drawing wins the first pick.

The drawing itself if rife with potential controversy. You can expect a wave of negative reactions if Toronto, Pittsburgh or Edmonton win this evening. Even the Rangers, fresh off picking second last year after some lottery luck, would be a fairly unpopular result. There are also some very obvious Sabres-related pitfalls that could come out of tonight. A Leafs win would be, let’s say, inconvenient. As would a Panthers win. Really any Eastern Conference win would create challenges for the Sabres. With that in mind, let’s rank the potential lottery winners based on how it could affect the Sabres and though the additional lens of my personal preferences. END_OF_DOCUMENT_TOKEN_TO_BE_REPLACED

It feels a little soon for the Sabres to be playing actual hockey games, but we’re a week out from the start of the NHL regular season and given the Sabres seemingly perpetual state, there isn’t much room for optimism.

There’s still time for Jason Botterill and Ralph Krueger to actually remove some players from the roster that finished in the bottom five last year. It’s just getting harder to have confidence anything substantial is going to happen when all of the usual suspects are still around.

Rasmus Ristolainen is the elephant in the room and his presence on the trade block is a matter of debate. Not only is there debate in the fanbase over whether or not he should be traded but whether or not the Sabres are actually shopping him or if they’re simply taking calls on him. Beyond Ristolainen there’s Vladimir Sobotka, Zemgus Girgensons and Johan Larsson occupying the fan’s doghouse. There isn’t much in the way of Sabres information in this week’s 31 Thoughts (or last week’s) but it’s still going to serve as the kick off to The OT for this season. END_OF_DOCUMENT_TOKEN_TO_BE_REPLACED

Justin Faulk was thought of as a targets for teams sniffing around Rasmus Ristolainen. Rumors that he would be dealt created some concern for Sabres fans hoping to see Ristolainen dealt. But Faulk’s final destination of St. Louis kept the teams reported to have the most interest in a right handed defenseman (namely Ristolainen) in the hunt. We analyze the Faulk deal, what affect it may have on the Sabres and just what’s left for Jason Botterill and Ralph Krueger have left to do in order to sort out their roster.

News broke that Dustin Byfuglien is contemplating his future in hockey and that again sparked discussions over whether or not the Sabres and Jets are good partners in a Rasmus Ristolainen deal. We jump head first into that topic, determining if a fit exists and how last week’s rumors surrounding the Ducks and Justin Faulk could play a role. Somehow our discussion over a potential trade fit turned into a scary impression of a Cap Friendly Armchair GM. So accept our apologies for our silliness with some of the trade proposals we throw out. Prior to that, we touch on the first two preseason games (well, the first one) and which players stood out in each contest.

We’re back for another season of The Instigator Podcast and we kick things off with a quick conversation on the Sabres new alternate jerseys before jumping in to more pressing issues. Namely, how impactful the roster of unsigned restricted free agents has been on business around the rest of the league. We close up with listener questions and yet another discussion on how the Sabres will trim their roster prior to the start of the season.

As the Stanley Cup Finals creep closer, as does the draft and offseason. That means teams who missed the playoffs or those eliminated early are gearing up for roster changes. The most recent edition of 31 Thoughts had plenty of tidbits on those potential moves and in the newest OT, I take a look at a few that stood out.

If you haven’t read last week’s 31 Thoughts you can catch it here. END_OF_DOCUMENT_TOKEN_TO_BE_REPLACED

The startling reality that faces the Sabres after yet another season without the playoffs is the club needs yet another round of big roster changes after their maneuvering over the past two summers has gone for naught.

Jason Botterill and Phil Housley’s first year saw ten new faces brought to Buffalo. They were just shy of repeating that figure again this season. While it’s not out of the question that the team they inherited was already heading to the basement before the pair stepped in. The franchise was already suffering in the wake of below average drafting and owned a handful of bad contracts while lacking depth. That they wound up finishing worse than Tim Murray and Dan Bylsma’s final year is perhaps more of an inevitability than a surprise. Regardless, Housley and Botterill will own the results of the last two seasons. It will all rest on Botterill’s feet and it remains to be seen whether he’ll be around to see the team climb back to respectability.

That leaves him will the difficult task of overhauling his roster for the third-straight summer. Last year’s overhaul brought only a minute improvement in the standings, buoyed by the 10-game win streak but destroyed by the January-to-April collapse. Does he have another trick up his sleeve, or will Botterill be resigned to a more conventional path to improvement?

Botterill’s best opportunity for unearthing talent at discount prices may come from targeting the teams run out of the first round of the playoffs. Teams like Pittsburgh who were frustrated at their early exit, or the Jets and Lightning whose cap situations will likely require trades to be made. Between tight cap situations and disappointing exits, there could be room for the Sabres to pounce. END_OF_DOCUMENT_TOKEN_TO_BE_REPLACED

The bonus extension of the deadline podcast looks at some of the biggest trades that went down at the 2019 NHL Trade Deadline. We look into all of the moves made by the Columbus Blue Jackets and the arms race out West. Specifically the deals made by Nashville, Winnipeg and, of course, Vegas.

For a team hoping to reshape their identity this offseason, the Buffalo Sabres are seriously short on talent and assets which can be parlayed into the type of deals which would bring about any sort of marked improvement.

Outside of Ryan O’Reilly, who could fetch a king’s ransom should he be traded, the Sabres have scant few assets they can give up in trades. They’re short on picks and expendable prospects with value. O’Reilly is the name on the tip of everyone’s tongue and San Jose’s first round pick is another valuable option but there isn’t much beyond that.

One avenue available to Botterill is a path he’s ventured down once during his time as the Sabres GM. Taking on salary to land the player he’s seeking. Even with the added cap hit that Jason Pominville carried, the deal that brought Pominville and Marco Scandella to Buffalo was a coup for the Sabres. Botterill was able to acquire a solid defenseman for his top four for a pair of forwards who were quickly becoming spare parts in Buffalo. The Sabres took on about $3mm in cap when it was all said and done, a minor uptick to unload dead weight and seriously upgrade the blueline.

It’s a tactic Botterill is in position to take advantage of once again this summer. END_OF_DOCUMENT_TOKEN_TO_BE_REPLACED

Phil Housley sits at the center of one of Buffalo’s more interesting trade trees. A memorable player in his own right, the tree includes three, maybe four, of the most iconic players to ever suit up for the Sabres.

Housley’s tenure in Buffalo was somewhat rocky, with complaints about his lack of physicality and grit overshadowing his prowess as a play driver.

After being selected with the pick acquired for the 1975 Cup team’s favorite players, Jerry Korab, Housley was included in a blockbuster that brought the Sabres one of the league’s best scorers. Housley had blossomed into one of the game’s most dynamic offensive defensemen and Dale Hawerchuk was a bona fide superstar.  He had scored 35 or more goals in eight of his first nine NHL seasons – seven with 40-plus goals – and had six 100-point seasons. The pair came with a swap of first round picks in 1990, moving the Sabres up five spots. This is where the Jets wind up winning the trade, as they say.

The Sabres selected Brady May with the 14th selection and he’d become a fan favorite and score the most famous goal in franchise history. The Jets wound up picking 500-goal and 1,000-point club member Keith Tkachuk at 19. From there the rest is history. Tkachuck would twice score 50 goals for the Jets/Coyotes before moving on to St. Louis. May was turned into a key member of the 1999 Cup team, Geoff Sanderson.

This one doesn’t have the legs of something like the Martin tree or even the (spoiler alert) Dominik Hasek trade tree. But it stretches over three decades of team history, an impressive span considering the low number of players involved.

Note: I made one slight alteration to this tree compared to the others: splitting Scott Arniel off separately. While he was a simple throw in to the Housley/Hawerchuk deal, I chose to include his branch to make the tree more robust.