The deadline has passed and while Kevyn Adams checked off the boxes he needed to, he hardly gets a passing grade after a pretty underwhelming deal for Taylor Hall. We run through Buffalo’s work at today’s deadline and touch on some of the bigger deals swung at the 2021 deadline.

As the Stanley Cup Finals creep closer, as does the draft and offseason. That means teams who missed the playoffs or those eliminated early are gearing up for roster changes. The most recent edition of 31 Thoughts had plenty of tidbits on those potential moves and in the newest OT, I take a look at a few that stood out.

If you haven’t read last week’s 31 Thoughts you can catch it here. END_OF_DOCUMENT_TOKEN_TO_BE_REPLACED

This week’s Instigator Interview features Buffalo’s own Polo Kerber of Sole High. Sole High’s popularity has skyrocketed as Polo and his team have become the go-to for custom cleats throughout the NFL. We chat about the customization process, some of Sole High’s more notable NFL clients and an upcoming project they’ve worked on with Alex Ovechkin.

This weekend’s set of back-to-back games will either set the table for a second half run, or dig the Sabres an even deeper grave.

Buffalo’s success against Washington certainly bodes well for this evening’s game. However, the Sabres were out scored 2-0 in the most recent 40 minutes of the season series. Buffalo out scored the Caps 9-1 in the first four periods.

Considering the first game was the Capitals’ best effort to get their coach fired and the second game was torpedoed by Michal Neuvirth’s poor play. Considering those two factors, this game could be worlds different than the first two meetings.

Tomorrow’s home contest with Ottawa is close to a must win, regardless of tonight’s result. Buffalo’s home play has started to come around. A win tomorrow will certainly do wonders for exorcising the FNC demons.

The Senators are starting to regain some footing in a rivalry they dominated since the lockout. They have had their way with the Sabres in the last two games. It could go without saying that Buffalo needs to establish their game early and attempt to grab some momentum.

Buffalo goaltending. The Sabres goaltending has struggled to keep their goals against below three as of late. Regardless of the fact that the Sabres have been unable to score goals in most games, the goaltending needs to show up and play big. Expect to see Miller tonight in Washington and Enroth against Ottawa tomorrow.

The last hot start the Sabres got off to at home was a 3-0 lead against Philadelphia. Buffalo allowed a late first period goal and eventually lost the game in overtime. 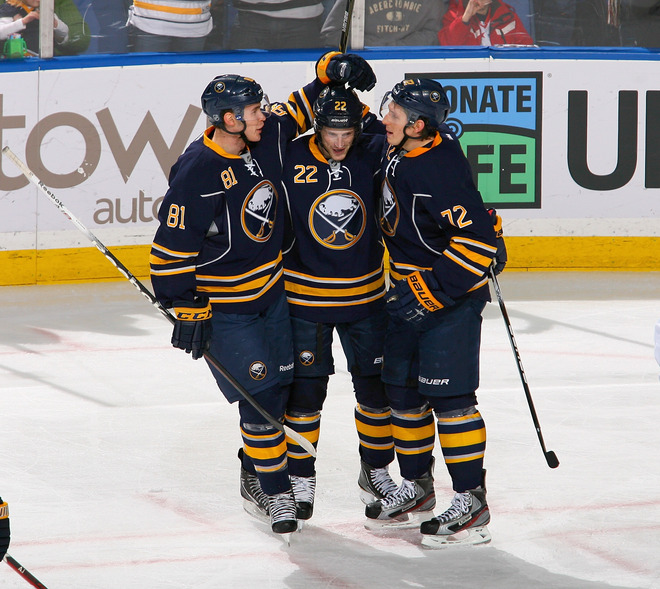 Buffalo didn’t let that same story play out last night. They opened with two quick goals and put their foot down to end the first period with a 4-0 lead. The Sabres shifted into cruise control after that, ringing a few posts on their way to a 4-2 victory.

They received a good effort from Ryan Miller, who made 20 saves and all the ones he needed to make. Washington’s two goals both came through massive screens, one which could have been argued as goaltender interference. Still, Miller rolled up another strong game and received the goal support needed to get a victory.

With three more games this week, two being played on the road, the Sabres have an opportunity to right the ship after a terrible run as they came to the Christmas break.

Slowly but surely the Buffalo Sabres are getting their injured players back. Brad Boyes and Jochen Hecht will play tonight and it would seem as if Tyler Myers will be playing again prior to the New Year. 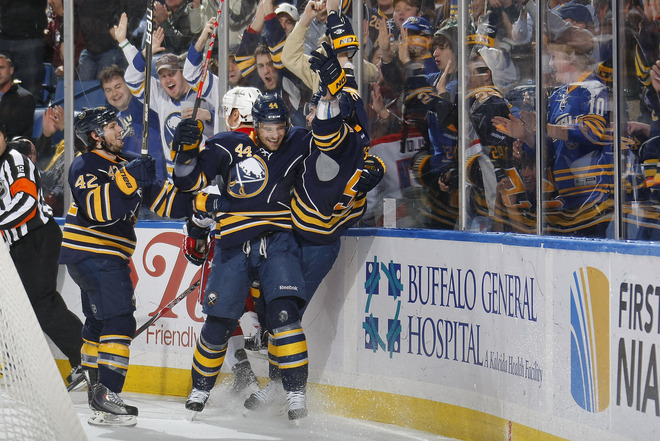 While see Hecht back on a line with Thoma Vanek and Jason Pominville is terribly depressing, Boyes will be skating on a new line with Drew Stafford and Derek Roy. That new combination will allow for the possibility of a Tyler Ennis, Luke Adam and Zack Kassian line. A very young, but talented trio. Ennis’ own injury could keep him out tonight.

The last time Buffalo and Washington met the Capitals were playing to get their coach fired. Now the Caps are playing under a new coach, but are struggling to gain traction. The Sabres are still in quite a bit of trouble on the ice and not many solutions have been presented at this point.

However, with the injury situation beginning to thin out, it would seem as if the Sabres will find themselves in a situation that will allow to make a roster move or two, if that is indeed the best way to get Buffalo back on track.

Vanek-Hecht-Poiminville. Vanek and Pominville have been the only consistent scorers all season. Vanek has been hobbled as of late, but remains the only true scoring threat. For a team that hasn’t eclipsed three goals very often, this limping top line will need to play big. 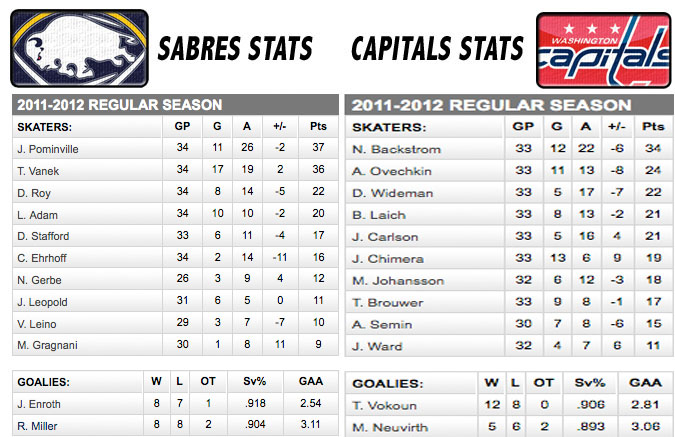 The Sabres did it. They snapped their losing skid and kept pace in the tight Eastern Conference playoff race. All of this at home, a place where they are below .500 for the year.

A night after being badly outshot and outscored, the Sabres filled the net and made sure to show no mercy against another struggling club. Buffalo found a way to keep Jhonas Enroth clean and gave up few scoring chances, a major piece to the victory.

The rash of injuries the Sabres are suffering from didn’t affect the outcome for one night as both new call ups (Brayden McNabb and Paul Szczechura) had strong showings.

Lindy Ruff and his staff will need to find a way to keep his rookies in simple situations in order to keep them from making glaring mistakes.

Last night may end up being one of the last contest Bruce Boudreau coaches for Washington. It doesn’t seem like his message is getting through to his players nor are his players giving very much of an effort on the ice. They could be a team to watch if they get a coach who gets through to that ultra-talented roster.

The injury bug has bitten the Sabres hard. Robyn Regehr and an unnamed forward (assumed to be a center) have joined Ryan Miller, Tyler Ennis, Tyler Myers, Mike Weber, Cody McCormick, Pat Kaleta and Brad Boyes on the injury list. The Sabres have called up Brayden McNabb and Paul Szczechura from Rochester.

There is still no news on which forward was injured – Mike Harrington speculates that Thomas Vanek or Jason Pominville could be candidates based on plays from last night.

Regardless, the Sabres will be playing with quite a few Rochester Americans on their roster this evening as the struggling Washington Capitals roll into town. The Sabres are in desperate need of a home win and a bounce back victory after three-straight losses.

The Capitals are in equally rough water as they have failed to live up to expectation this season despite their high payroll and roster of superstars. Alex Ovechkin, Alex Semin and high-priced free agent Joel Ward have all been sat down for various lengths of time throughout the early going here.

This might just fall into the must-win category for the Sabres. A week and  half ago this team was second in the conference, now they’re tied for eighth and are in desperate need of a big run to climb back into the top half of the conference.

The Youngsters: McNabb, Kassian, Brennan and Tropp. Sure Szczechura could fall into this boat as well, but he has seen time in the NHL (Tampa Bay) and was signed for veteran depth, he certainly isn’t a prospect. Still, the Sabres need big contributions from this bunch. Brennan has been great in his couple games, Tropp has shown he may be the next Pat Kaleta and Kassian and McNabb will need strong showings this evening to prove they’re at the same level as the other Amerks in the lineup tonight. 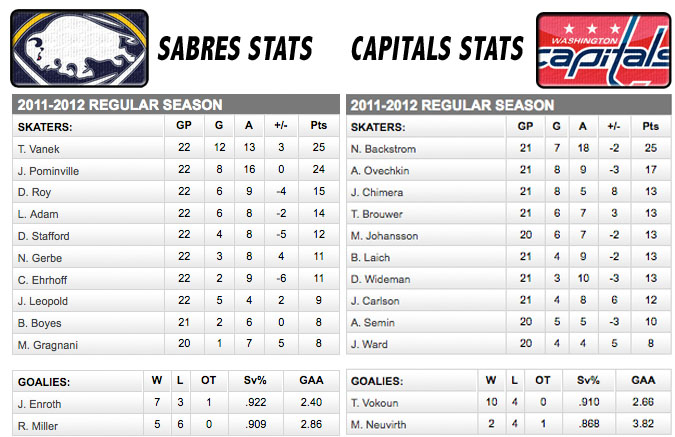 Another NHL season is upon us after a summer that was filled with more Buffalo hockey news than you could shake a stick at. The entire Eastern Conference saw a shake up over the summer and the conference could see a similar playoff race, with seeds 7-12 all within shouting distance of each other. I think the same playoff cast will return this season, but with a few minor changes: END_OF_DOCUMENT_TOKEN_TO_BE_REPLACED

The Buffalo Sabres dropped their final NHL preseason contest to the Washington Capitals 4-3 in a shootout.

Buffalo led 3-2 in the third, only to surrender the tying goal to Matt Hendricks with just under seven minutes to go. Thomas Vanek scored twice and Jason Pominville added a first period tally for the Sabres. Ryan Miller went the distance and made 29 saves. Jhonas Enroth was expected to see at least one period, but Lindy Ruff opted to get Miller another complete game. I would expect Enroth to play 60 minutes against Alder Mannheim on Tuesday.

Since this contest was sans television there isn’t too much I can offer in terms of analysis. However, losing a third period lead with most of the ‘A’ team playing isn’t very encouraging. END_OF_DOCUMENT_TOKEN_TO_BE_REPLACED