The butterknives are back. Among the many uniform requests Sabres fans have made in recent years, honoring the black and red era has been near the top of the list. Buffalo’s entry in the NHL’s Reverse Retro program doesn’t bring back the black and red color scheme, it’s certainly a step in the right direction.

For years it has seemed like the Pegulas and PSE would rather sell the team before truly acknowledging the era of black and red jerseys. That they’ve resurrected a design from the era certainly bodes well for future endeavors. So long as the proper deadlines are met.

The Reverse Retro alternates that will be worn this year are a fun homage to the third jersey the club released in 2000. The design looks great in the new blue and gold colorway and we even get the added treat of the goathead logo adorning the shoulders.

I’ve been a fan of the team’s original third jersey for a long time, so I’m extremely pleased to see these return to action. The new blue and gold colors translate well to the design and the white base is a welcome choice as the blue and gold stripes work far better than a white and gold stripe would have on a blue jersey. I know the wordmark isn’t very popular with fans but I’ve always been fond of it. And it looks good in blue and gold, so I count that as a win.

The crest loses some of it’s meaning without a black backing – as the original design was said to be a puck – but I think the tie-in to the main crest allows the blue background to work fine. Leaving some of the silver accents was a wise choice as it adds some much needed depth to the swords on the crest. It also helps define the recolored goathead logo on the shoulder.

Really, the only two quibbles I have is the lack of a red eye on the shoulder patch and the silver trim on the numbers. Keeping the silver makes sense considering the silver that remained on the crest and shoulders but I think the numbers would’ve looked better without the extra layer of trim on it. 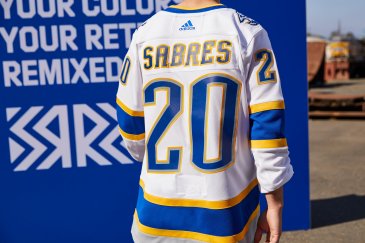 I do think some people haven’t fully grasped the overarching concept of these jerseys. Although it doesn’t seem as if there was a strict set of guidelines all 31 teams needed to adhere to. Generally speaking, most of the jerseys unveiled on Monday use a modern color scheme on an older jersey. Some invert colors on the throwback the club chose (Tampa, for example), while others managed to go big by resurrecting an old design (like the Rangers). But overall, the approach was to offer up some sort of remix on an older jersey. So, the Sabres weren’t going to trot out with either their home or away black and red jerseys. That just wasn’t the route this line was following, and I think that’s important to keep in mind. I’ve seen a fair bit of feedback wondering why the Sabres didn’t just use the goathead and I think if that was your expectation heading in, you were going to be disappointed.

Overall, this is a great nostalgia trip with the added twist of the modern colorway included. It doesn’t shut the door on wearing red and black jerseys in the future. We can all continue to roll our eyes at their resistance to bringing back the black and red jerseys in some limited fashion. Given how long it took them to come around to reintroducing royal blue, it’s going to take a couple more years of persistence from the fans.

But in the interim, we have these duds to enjoy. They’re a fun design which won’t distract from the new royal blue jerseys the team just introduced. The jersey looks great and gives a payoff for everyone pining for a nostalgia trip that was missed during the 50th anniversary season. The Sabres don’t get too many wins these days but when they get something right it’s okay to celebrate it. These are a win and I’m hoping we’re lucky enough to see them used beyond this season.