On the eve of the Buffalo Sabres season (and hours after the Eichel gut punch) we thought it would be cool to take a look at the new paintjobs and new gear Buffalo’s goaltenders will be wearing this season.

All four goaltenders who will be splitting time between Buffalo and Rochester will be using masks painted by Dave Gunnarsson (DaveArt) which probably should be of little surprise given his massive NHL portfolio and Swedish nationality. That the Sabres feature three Swedes certainly helps push business to the NHL’s preeminent mask artist.

As for gear, things are split down the middle between CCM and Vaughn. Robin Lehner and Jason Kasdorf are Vaughn disciples while Anders Nilsson and Linus Ullmark both sport CCM gear. Here’s the full rundown: 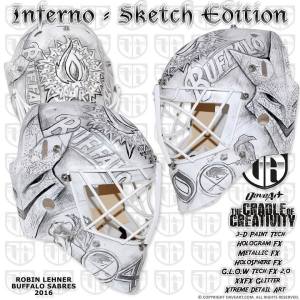 Mask: Vaughn Pros’ Choice – It looks as if Lehner will be continuing to wear the white mask he debuted last season which DaveArt used a new sketch pen technique on. The mask is tough to decipher from distance but up close there are some very cool details. I’m someone who likes to see a little more color on a mask, but the level of detail on this one makes up for the lack of color.

Pads: Vaughn Ventus SLR, Vaughn Velocity V7 blocker – Lehner is sporting the newest pads from Vaughn this year, a new take on the Ventus pads he’s been wearing for a few seasons. He’s become something of the poster boy for this line of Vaughn pads and it almost looks as if the pattern on these were developed exclusively for the Sabres color scheme. Lehner’s new look is terrific and blends a perfect mix of color-heavy and a white base.

Mask: CCM Pro – Anders Nilsson’s Sabres mask is a take on the same design he’s been wearing for a few seasons now. It is a cool homage to Billy Smith’s old Islanders mask which ropes in his team’s colors and offers some cool takes on each team’s logo. His new Sabres mask substitutes crossed swords for hockey sticks on the mask with many expected Sabres marks worked in on the matte finish mask.

Pads: CCM EFlex III– CCM’s newest Extreme Flex pads and gloves give Nilsson a clean look in what appears to be a slightly too-light shade of blue compared to Buffalo’s logo.  Even if the blue is a shade too light (and shots from the broadcast look as if he’s gone to a darker navy), I really like the way he utilized the graphics package on the EFlex IIIs, he’ll look terrific in home or away jerseys.

Mask: Bauer Profile– The #Minions are back for more fun. Linus Ullmark’s mask this season is a really cool combo of Sabres blue and gold and Amerks themes with the Captain America take. His mask is easily my favorite of all the Sabres goaltenders, especially with the white cage.

Pads: CCM EFlexIII– Ullmark and Nilsson rock the same family of gear from CCM although Ullmark goes with a strictly white and blue set which carries over nicely between Buffalo and Rochester. He sneaks gold logos onto his gear but they’re not very noticeable which makes his color choice work for both teams. I’m not crazy about how he worked the graphic on the EFlexIII pads, especially since his pads last year looked terrific. 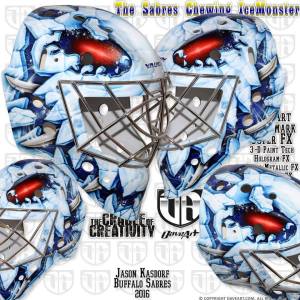 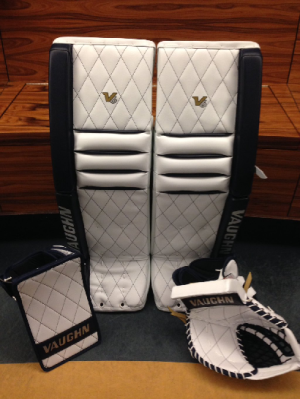 Mask: Vaughn Pro’s Choice– Kasdorf didn’t jump on board with a Sabres or Amerks themed mask right away but he eventually came around to give DaveArt the sweep of the Sabres goaltending depth chart. Kasdorf’s Sabres mask looks a little bit like Mr. Freeze combine with Megatron and while I certainly think it looks cool, I’m not in love with it either. It’s a good looking mask but there are some stunners to compete with in the organization.

Pads: Vaughn Velocity V6– The custom diamond stitch Vaughn offers is either loved or hated depending on who you ask. I’m not a big fan of the look although I do love the navy blue outer roll Kasdorf went with on his pads. From a distance they’ll look white with a blue outer roll, so no complaints here. I’m just more of a vertical or sock stripe guy myself.

Petersen gains entry to the party for two reasons. First, he is a Sabres prospect. Second, he has undoubtedly the best taste in gear of anyone in the pipeline. He’s had three terrific sets with Notre Dame and while the gold mask gets most of the hype, it’s the pads that do it for me. 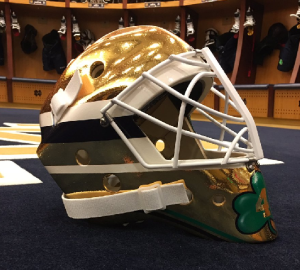 Mask: Vaughn Pro’s Choice – Petersen goes through Bishop Designs for his mask art, the same artist Ryan Miller has used for his entire career. The trend of painting masks to match the gold helmets at Notre Dame takes some of the fun out of it and while people rave about the mirror gold look, it’s not the most ground breaking design ever. That being said, I love that Petersen’s mask art mirrors Patrick Roy’s mask from his time in Montreal and the shamrock on the chin is a great touch.

Pads: Vaughn Velocity V7 – These are easily Petersen’s best set to date. Each year he’s gone with a slightly different look with the antique gold and navy blue but he hit it out of the park this season. I’m looking forward to when he finally signs with Buffalo as his fine taste in equipment will be a joy to consume in the NHL.

2 thoughts on “Goalie Gear Watch: New Masks and Gear Throughout the Sabres Organization”