Tim Murray has had the arsenal of assets to make a major play for talent going back to his first trade deadline as the Buffalo Sabres general manager. He will enter his second trade deadline with his second major trade in his rear-view mirror.

Murray shipped an impressive package of Tyler Myers, Drew Stafford, Joel Armia, Brendan Lemieux and a conditional first round draft pick to Winnipeg in exchange for Evander Kane, Zach Bogosian and Jason Kasdorf. It’s a trade the provides the Sabres with not one, but two significant pieces that fit in both the short, and long term plans of the organization.

There is some concern that Murray may have sacrificed too much in order to complete the trade but in a world where you have to pay a premium to obtain premium talent, it lines up as a balanced transaction for both teams. END_OF_DOCUMENT_TOKEN_TO_BE_REPLACED

Considering it appeared as if Zadorov was destined to be returned to London, he will now get approximately two more weeks to spend with the Sabres strength and conditioning staff and I’d gather he’ll probably have the chance to get on the ice a few times as well. While it wasn’t a guarantee, I do believe that the Sabres wanted to give Zadorov a nine-game tryout prior to his injury. Assuming that was indeed the case, his nine-game cameo might just come after he’s fully recovered. Comparing the two timelines is easy enough; two weeks plus nine games > nine games. END_OF_DOCUMENT_TOKEN_TO_BE_REPLACED

You can’t say the Sabres haven’t won anything. They enter this year’s Traverse City Prospect Tournament as the defending champions after their triumph in 2011.

Buffalo’s title defense was delayed after last season’s lockout and they may benefit from the delay as they are prepared to ice a scary talented roster for the 2013 tourney. Mikhail Grigorenko will lead Buffalo’s other top prospects including; Joel Armia, Zemgus Girgensons, Johan Larsson, Rasmus Ristolainen, Nikita Zadorov and others in search of another tournament championship.

Sending stacked rosters isn’t necessarily something that only the Sabres participate in. Each team manages to send a combination of pro ready prospects, new draft picks and players who have seen pro ice time to the tourney. It just so happens that Buffalo makes sure to construct a roster of their best prospects.

In 2011 the top line of Luke Adam, Marcus Foligno and Zack Kassian bullied their way through the rest of the tournament and claimed the first championship the franchise has ever seen.* Considering that Armia, Girgensons, Grigorenko and Larsson are amongst those participating, I think the Sabres are betting on bringing back another championship.

In addition to Girgensons, Grigorenko and Larsson – all who played professionally last year – Buffalo has a pair of NHL defensemen (Chad Ruhwedel and Mark Pysyk) to skate along with another NHL-ready player in Ristolainen. END_OF_DOCUMENT_TOKEN_TO_BE_REPLACED

Development Camp isn’t a device that is designed to fill out an NHL roster. The majority of the players invited to these camps are preparing to return to school or junior, not the NHL. However, there are always a few prospects that stand out above the rest.

The Sabres 2012 Development Camp provided the opportunity to see a trio of players that will likely be directly tied to the franchise’s future. Joel Armia, Zemgus Girgensons and Mikhail Grigorenko all participated in their first development camp with the Sabres after being picked in the first round of the last two NHL Drafts.

Armia missed out on the 2011 Camp due to complications getting to North America so soon after the Draft. Armia had an improved season with Assat of Sm Liiga and a point per game pace (5+2) at the World Juniors. He was dynamic at many times during development camp. His size set him apart and it was clear that two full seasons of professional hockey has aided his development.

While he is bound to Finland for another season, I doubt that Armia will have much trouble adapting to the NHL game when he arrives next year. What was most impressive, to me, was his ability to create in tight spaces. On a number of occasions he found ice for an open shot despite being in close quarters. The fact that he was able to do so on a daily basis was truly what stood out over the course of last week.

In tandem with Grigorenko at center, the line has the makings for a talented, dynamic and explosive offensive unit. Whether or not Girgensons is part of the line is up for debate. Having him ride shotgun for the two big guns would be an interesting development, but he would likely be better served on a separate line from Armia and Grigorenko.

Grigorenko was one of the players entering camp with the opportunity to build a resume that would eventually lead to a contract and a chance to truly make an impression at training camp. Outside of those who saw NHL action last year, Grigorenko and Girgensons were the only two at camp who really had the opportunity to jump directly into the professional ranks.

Girgensons contract all but ensures he will see plenty of time playing against men in Rochester for the 2012-13 season. Signing him and getting him into the professional game will be the best step for his development. END_OF_DOCUMENT_TOKEN_TO_BE_REPLACED

With day one of Development Camp in the books, it is quite clear that the Sabres have some impressive skill throughout their prospect ranks.

The prospect group has been broken into a blue and gold squad, with a few more veterans on the gold side and some more explosive talent on the blue team. Based on my schedule, I will only be able to catch the first session for Monday and Tuesday but be present for the entire time on Wednesday and Thursday.

Today’s first group was the blue team’s prospects that included Joel Armia, Zemgus Girgensons and Mikhail Grigorenko. The blue team is certainly full of more of the high-octane talent on the Development roster as compared to those with more NHL and AHL games played on the gold team.

The blue team is loaded with the top prospects from each of the last three NHL drafts. In addition to Armia, Girgensons and Grigorenko, the blue squad boasts Mark Pysyk, Marcus Foligno and Brayden McNabb.

As for the gold team, Luke Adam, Cody Hodgson and Corey Tropp will anchor the team in terms of talent up front while Dan Catenacci, Brian Flynn, Jerome Gauthier-Leduc, Matt MacKenzie and Kevin Sundher all are players who signed with the Sabres in the past year.

Monday’s first session ran through a number of basic puck movement and flow drills with a few drills with a bit more of battle included. A majority of the ice time was devoted to full ice, transition drills that lead to equal (2-on-2) and odd-man (2-on-1 and 3-on-2) rushes. Most of the drills were straight forward enough that each players’ talent level was on display each rush down the ice. I would expect the next two days will start infusing a bit more systematic hockey as compared to simple rush drills. END_OF_DOCUMENT_TOKEN_TO_BE_REPLACED

With Development Camp set to open on Monday morning, the Sabres will be rolling out a few firsts with this year’s version of the evaluation camp.

The first, and biggest change is that First Niagara Center will be home base for the week. The camp was previously held at Dwyer Arena at Niagara University. The twin rink facility there lent itself well to getting the entire camp roster on the ice. However, hosting at FNC will allow for greater fan access, thus leading to greater exposure. Bravo to the Sabres for leveraging this situation into something that benefits them and the fans. 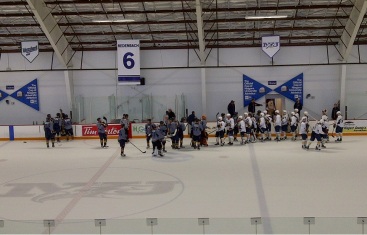 Thursday’s Blue and Gold Scrimmage is bound to draw a large crowd, I’m expecting the lower bowl to be fully occupied by fans wanting to see players like Joel Armia, Mikhail Grigorenko, Zemgus Girgensons and others. Armia, Grigorenko and Girgensons represent the other set of firsts which will be rolled out next week. In addition to the three young forwards, Cody Hodgson and Mark Pysyk will be the other first round picks in attendance for the camp. Providing fans a close look at so many first round talents will not only provide a great look at the future, it will help to generate significant buzz amongst the fan base.

It will be particularly important for some of the invitees to set a good example with these practices. Grigorenko has already been rumored to be working on a deal, while Girgensons can play in the AHL next season should he sign his ELC. Marcus Foligno Hodgson, Luke Adam, Corey Tropp and Brayden McNabb will be hoping to further convince the staff to keep them around next year; while players just into their ELCs (Armia, Pysyk, Kevin Sundher, JGL, Dan Catenacci) will be looking to make a solid first impression.   END_OF_DOCUMENT_TOKEN_TO_BE_REPLACED