Perhaps it’s because I’ve played goalie longer than I’ve played forward, but I’ve always been very set in my ways when it comes to gear. I’m an unabashed gear nerd but when it comes to how I wear my equipment and what I prefer, there’s really only one way I like to do things.

So when I was given the chance to try out Buttendz – a rubber hockey stick grip – I was skeptical to the feel I’d end up with compared to regular tape. My concern wasn’t related to how my stick handling may be affected – mainly because I don’t have very good hands – but to how the grip would add bulk to the end of my stick. I’m very set in my ways when it comes to how my equipment feels when I’m playing and the idea of adding a thick rubber grip wasn’t high on my list. 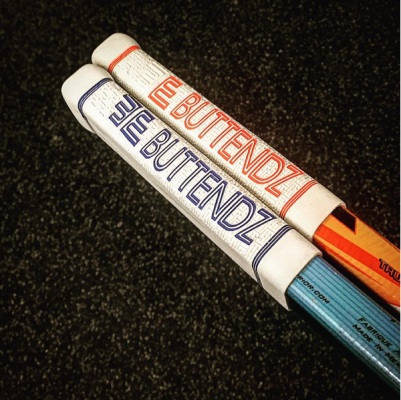 However, I haven’t noticed any sort of difference between the Buttendz Fusion grip I put on my stick and the old, ratty tape butt end I had before. In fact, I have to say I prefer the feel of the Buttendz to any previous taping method I used before.

I went with the Fusion as it was closest to the butt end I typically use. It has a smaller knob on the top and a textured grip section that extends a few inches down the shaft of the stick. Buttendz also offers the Flux and the Twirl which together address just about every type of butt end you may find at the rink.

Oh by the way, Buttendz is a company started and based in Buffalo by Kevin Lonergan and AHL and ECHL veteran Rob LaLonde. So if you weren’t already interested in buying because the product is great, you’re boosting up a Buffalo-based company at the same time.

Buttendz grips are thin enough that they don’t feel bulky in your hands but thick and textured enough to give just enough grip and friction to give a comfortable, responsive feel for your top hand. Their website posits that by reducing the amount of pressure you put on the top grip Buttendz promotes better shooting and passing along with less vibration through the stick. They also advertise reduced wear on the palms of your gloves.

I’ve been using a Butendz Fusion for just over a month on the new Warrior Covert QRL stick. Between the new Covert’s technology and the comfy grip, I’ve been playing some of the best offensive hockey I have in well over a year. As a very average goal scorer, I’ll take any points where I can get them, so this run of play is quite enjoyable. The improvement in performance is definitely noticeable with my wrist shots as I’m getting a bit more zip on them along with my passes. My slap shot went from bad, to still pretty bad. Even if the Fusion didn’t amp my slapshot up to 90, I can attest to feeling an improvement when shooting and passing the puck.

Feel is easily the best feature of the Buttendz grip. You cannot tell you have a rubber grip on your stick during a game. It’s amazing, to be honest. The grip provides plenty of friction, so it’s not as if you have a slick, wet piece of rubber on the stick. Even still, the difference in terms of bulk when compared to tape is negligible. In my opinion, that makes the grips worth the money separate from any other benefits.

The grips don’t get messy like a tape butt end and, by extension, don’t add gunk or wear to the palms of your gloves either. Having picked up a new pair of gloves recently, I can attest to the lack of wear on my left (top hand) glove while playing so that feature isn’t just lip service. That’s not a small victory either when you consider how these grips could extend the life of your gloves.

As with all hockey players, the mirror test is obviously a big deal. All three grips feature Buttendz’s signature drip line which is a clash-color line that extends down the grip on all three models. It gives you the option of picking colors to match your team, your stick or simply your favorite color. For example, I went with a white grip with the fire drip line and logo. It matches the orange on the Warrior Covert perfectly, giving the grip and stick a very cohesive look.

All three grips look good but the Twirl is easily the best looking of the three. The candy cane pattern along with Butendz’s signature drip line really looks great. The logo wrapping around the very bottom of the grip is a nice touch, too. I actually wish the Fusion used a similar graphics set up.

All told I’m extremely happy with the Buttendz grip I’ve been using. It looks good and feels better. You may think the $25 price tag is high but when you consider you can reuse these over and over and you’ll never need to tape a butt end again, it’s really a great buy.

Check out Buttendz online and definitely make sure to follow along on social media as well.