It’s a good year to be a gear nerd in Buffalo as the Sabres goaltenders have extra masks and pads on display thanks to the 50th anniversary celebration.

The annual 2ITB Sabres goaltending fashion update is running a little later than usual in order to capture the recent Hockey Fights Cancer masks and to account for all of the equipment being worn from Buffalo down to Cincinnati.

As always, this post captures the mask art and gear being worn by any goalies on an NHL contract in the pipeline with special dispensation made for 2019 draft pick Erik Portillo because of his crazy Bauer True Design pads. END_OF_DOCUMENT_TOKEN_TO_BE_REPLACED

The Sabres are back and with a new hockey season comes new hope, new expectations and, most importantly, new goalie equipment. 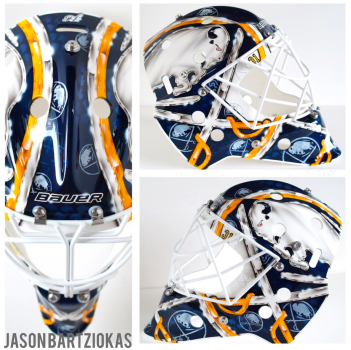 Every goalie in the Sabres system has a new-ish look for the season and while this lineup certainly isn’t the most impressive collection of masks and gear the team has ever seen, there are still a few solid set ups throughout the pipeline.

None is better than Robin Lehner’s phenomenal Brian’s OPT1K set. Known for unparalleled customization, Brian’s and Lehner cooked up a terrific blend of stock and custom team-logo graphics. I’m not always a fan of the fully custom team logo sets Brian’s creates, but the Sabre on each piece of Lehner’s set is understated enough that you have to look hard to find it.

Chad Johnson is really the only other worthwhile set up to speak of. He is sporting a clean Ventus set that is a little less colorful than the Ventus gear Lehner wore last season. The Ventus graphics are attractive and work nicely with the Sabres colors.

Other than the two goalies with the big club, Buffalo’s other netminders all sport very basic blue and white sets which won’t clash with the Amerks uniforms but don’t stand out much either. Where there is plenty of variety is in the mask department. END_OF_DOCUMENT_TOKEN_TO_BE_REPLACED

A number of moves made by Darcy Regier and Tim Murray were done to prepare the Sabres for life after Ryan Miller. One player that was acquired (Matt Hackett) may find himself pushed out of the Buffalo goaltending situation.

Regier’s drafting of LinusUllmark and Cal Petersen in consecutive seasons along with the acquisitions of Hackett and MichalNeuvirth has bolstered Buffalo’s depth in the crease with an eye on the future. The Sabres have drafted a goaltender in each of the last three drafts and have eight goaltenders in various levels of the pipeline.

While Jhonas Enroth and Neuvirth are expected to carry the load into the 2014-15 season, the landscape behind them could be in for a change depending on the direction Murray wants to go. Both Enroth and Neuvirth have one more year left on their respective deals before reaching unrestricted free agency. Nathan Lieuwen has one more year until his entry level deal expires while both Matt Hackett and Connor Knapp hit restricted free agency this summer.

Andrey Makarov is the only signed goaltender with significant time on his deal; he doesn’t become a restricted until after the 2015-16 season. Cal Petersen and Linus Ullmark are both unsigned with Petersen a few years away as he prepares to head to Notre Dame and Ullmark creeping towards a contract with superb play in the SHL.

The situation for the big club is all but set. Enroth and Neuvirth will be Buffalo’s starters entering next season and it’s conceivable that they both receive extensions next summer as the rebuilding process continues. It’s the depth chart below them that could be due for a shake up. END_OF_DOCUMENT_TOKEN_TO_BE_REPLACED

Buffalo Sabres training camp was supposed to have opened last Friday. Instead, Tyler Ennis agreed to hop over the pond to Switzerland, Christian Ehrhoff was beginning his stint back in Germany and other Sabres were pondering European deals as well.

While it doesn’t seem as if the Sabres will be starting up any time soon, the Amerks have been injected with some extra talent (from their parent club) and have a deep, overpopulated roster to sort through before the puck drops on the AHL season.

The most difficult decisions for Ron Rolston and his staff will be at forward and defense, where the surplus of players is significant. However, the most delicate situation that Rolston and the organization as a whole will need to deal with is in net.

David Leggio is back for another season with the club but will have some interesting company this season. Rookies Nathan Lieuwen and Connor Knapp will each be entering their initial professional seasons but in a situation where two’s company and three is typically a crowd.

Leggio is the unquestioned starter after finding his way into Rolston’s good graces with consistently solid play last year. This was a pleasant surprise for the WNYer because of the contract given to AHL journeyman Drew MacIntyre who was signed to provide more stability as Buffalo’s third goaltender. However, one year removed from outperforming Jhonas Enroth in Portland, Leggio did it again to another goaltender who was tabbed as the superior talent.

The big step here is that Leggio is just one injury away from stepping in as the Sabres backup. This is likely something that the Sabres are at least somewhat concerned with because of the massive question mark that is Leggio’s ability at the NHL level. While he is a very good AHL goalkeeper, there is nothing that indicates how strong he would be filling time in the show.

Leggio’s presence will stabilize the Amerks crease and give the team a reliable starter for a majority of their regular season contests. He should also serve as a tutor of sorts for Lieuwen and Knapp. Where the situation gets sticky is the way in which the two rookies will be rotated. END_OF_DOCUMENT_TOKEN_TO_BE_REPLACED