Momentum continues to build on Buffalo’s Outer Harbor as additional announcements continue to roll in after Governor Cuomo’s announcement confirming the NFTA’s withdrawl from the massive property  this year. 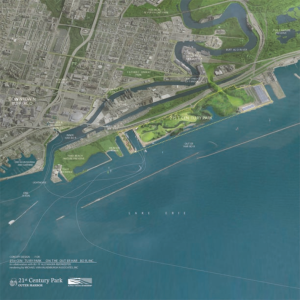 The newest group to step forward is one pushing for a large park to be constructed on the Outer Harbor. Their plan calls for a massive 130 acre area to be occupied by a brand new park that would span between Wilkeson Pointe and the recently purchased Terminals A and B. The Buffalo News has all these details if you wish to learn more.

What interests me is the scope and approach of this proposal. While I’m not usually one to promote yet another open park in place of potential mixed use development along out waterfront, this strikes me as one of the strongest uses of waterfront land since the renewed interest in developing the waterfront began.

Of course, in typical Buffalo fashion, this is currently little more than a pretty drawing being promoted by a community interest group set to be presented along with other pretty drawings from other groups. Regardless, it serves as a strong use for a significantly large piece of land that’s sat vacant for far too long.

You may notice that this land is part of the proposed Bills stadium that was pitched earlier in the year. I’m not particularly fond of that stadium plan although I assume that group may be amongst those pitching ideas along with the 21st Century Park group – exactly how many wasn’t mentioned by the News.

Kudos to the 21st Century group for noting the Esmonde Template in securing noted preservation obstructionists as “close friends” as stated on the park website. This is the type of project that those two loveable “waterfront development enthusiasts” would promote, but it just goes to show the importance of securing the proper protection for your projects. END_OF_DOCUMENT_TOKEN_TO_BE_REPLACED