Goalie masks hold a unique place in sporting culture. Few sports provide any outlet for personal expression in the way masks do. It’s an excellent feature and I can tie my own personal desire to play goal to an attraction to the myriad masks I’d inspect on my hockey card collection.

There are a million and one awesome masks out there and a simple Google search will yield you endless rankings and top ten lists from half the writers on THW or Bardown. To avoid plaguing the internet with another goalie mask ranking, I’m going to try a slightly different approach. Cataloging some of the most iconic masks of the modern era while sprinkling in some of my personal favorites along the way.

When I say modern era I’m thinking strictly from the perspective of the history of goaltending. So most of my attention is being directed to masks designed and worn from the late 1980s on. My loose definition of the modern era of goaltending is when most of the league’s goalies had transitioned away from the old fully molded masks and had begun to transition away from helmet and cage combos towards the modern masks we are familiar with today.

That isn’t to discount some of the incredible works of art from the 60s, 70s and 80s, but just to keep the focus on a smaller group. I won’t leave out the league’s golden age as the masks of Giles Gratton, Murray Bannerman, Gary Bromley, Gerry Cheevers and Gilles Meloche are worthy of their rightful place as some of the most beautiful masks of all time.

It does feel like mask art has evolved a bit in recent years towards more interchangeable designs which don’t carry as much weight as some of the more definitive masks of prior eras. Some of that has to do with goalies spending less time with a single team, thus necessitating different designs. But the access to quick paint turnarounds may have something to do with that as well. For example, Henrik Lundqvist spent nearly 15 years with the Rangers but never had a firm paint scheme that he stuck with. Instead, experimenting with different looks. While that’s a great trend for the goalies and those of us who enjoy consuming those different designs, it does cut out the opportunity for goalies to wear a design that would be career defining. Further to that point, the ability for artists to get more detailed with mask designs has eliminated some of the more basic designs which tend to garner more appreciation from goalies or fans alike.

Marty Brodeur is a good starting point given that previous point regarding the lack of definitive designs. Brodeur’s Devils design was a low key design that endured for nearly his entire career. I will admit I was never a huge fan of the design but I can acknowledge it’s popularity and the simple fact that you could show a fairly casual hockey fan the mask design and they could tell you who wore it. That’s not the perfect barometer for defining an iconic mask but it certainly doesn’t hurt. 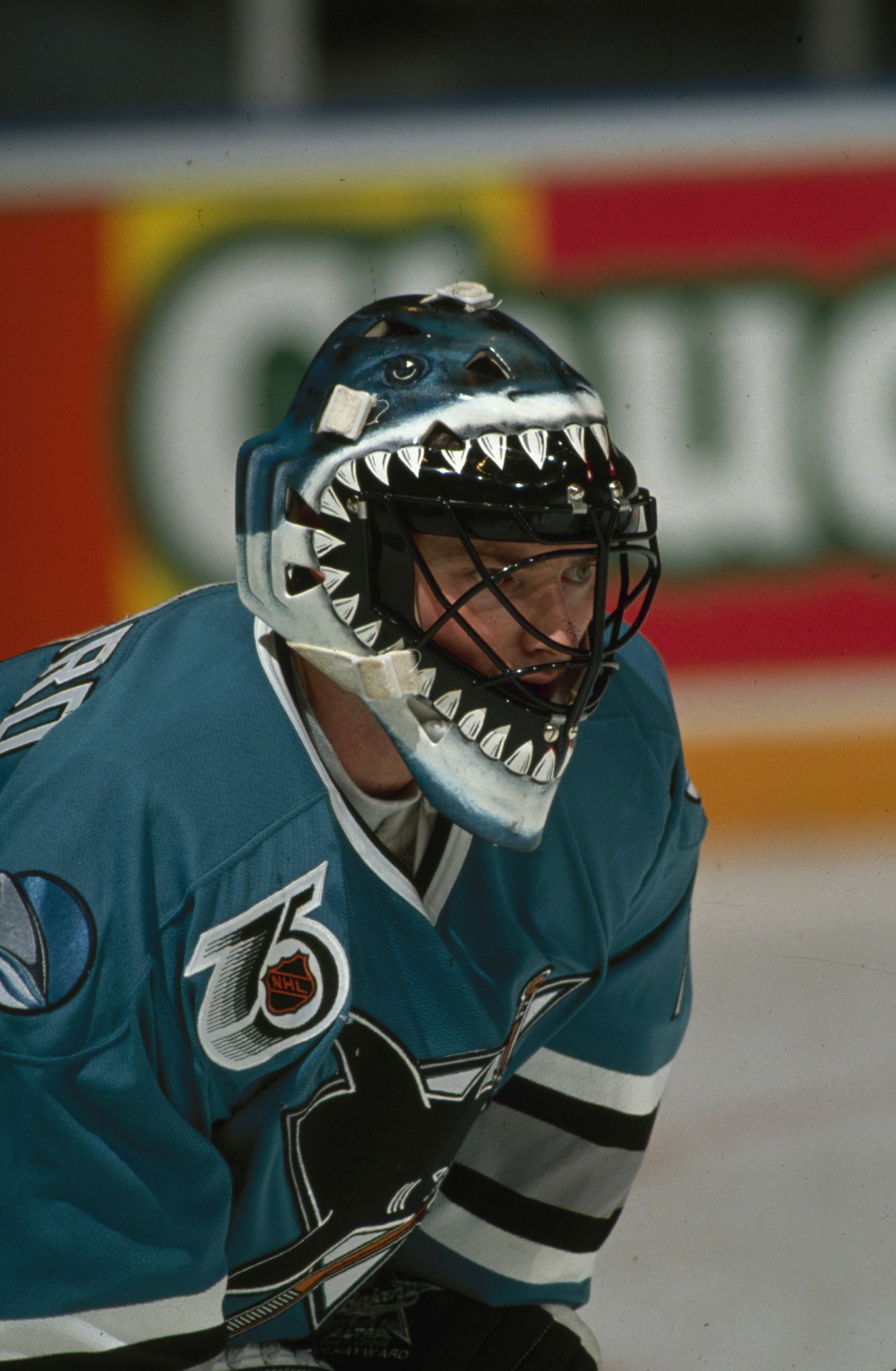 Now for a mask that I love. Haywards Sharks mask makes every single list of best masks and for good reason. It’s highly detailed but still easily identifiable from a distance. It’s a great concept not only for the team’s nickname but the idea that the goalie’s face is in the shark’s mouth. It’s almost a picture perfect mask in every way. As a goalie gear fanatic I think I might appreciate more than some how Joseph carried his CuJo design with him at nearly every stop of his career. The colors were always on point and even when he was playing for teams whose nicknames had nothing to do with a dog or a wolf, the mask worked perfectly with their uniforms. His masks in Toronto were especially awesome and I can’t imagine you’d find too many people who would debate the quality of his mask art. Honorable mention to Joseph’s oil drop mask which he wore in Edmonton for a short period and with Team Canada at the 96 World Cup of Hockey.

Sprinkling in a few of my personal favorite masks in hopes of breaking up this listicle with…another list.

Grant Fuhr’s longhorn skull mask that he wore in Buffalo was picture perfect and Stephane Fiset had a pair of excellent masks which he sported in the 90s. His Nordiques mask was especially awesome.

Cam Talbot deserves plaudits for continuing to incorporate Ghostbusters iconography onto his masks. My personal favorite is the one with Ecto-1 on the chin. I love how the grill is incorporated along with other aspects of the car, the Stay Puft Marshmallow Man and other Ghostbusters features.

I tried my hand at painting Marvin the Martian onto an old street hockey mask with little success. All because Patrick Lalime’s masks always looked really cool. 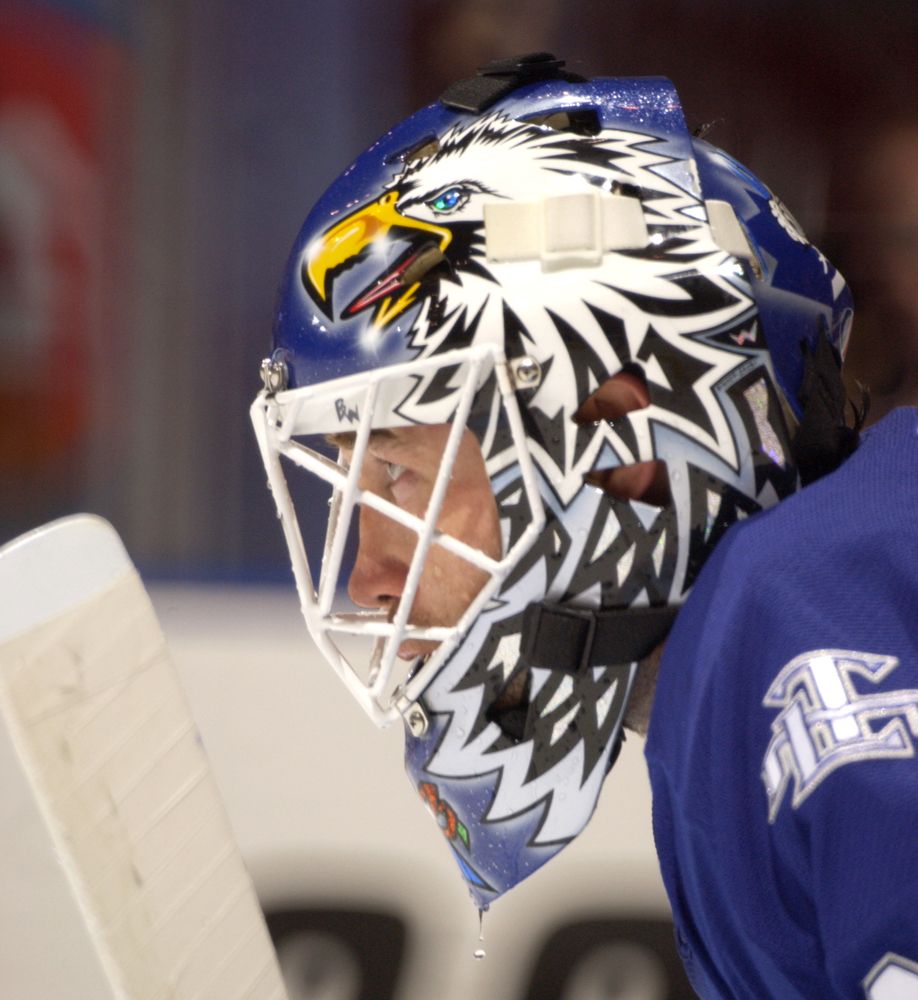 Belfour’s eagle design has been replicated by goalies all over the world for decades and the evolution of his own masks is cool to track. From the more realistic illustration on his masks in Chicago to the more bold designs he wore in Dallas and beyond, Belfour was always at least partially defined by the artwork he wore on his masks. For those who don’t know, check out his more recent masks which actually have “Eagle” hidden in the eagle’s white feathers. 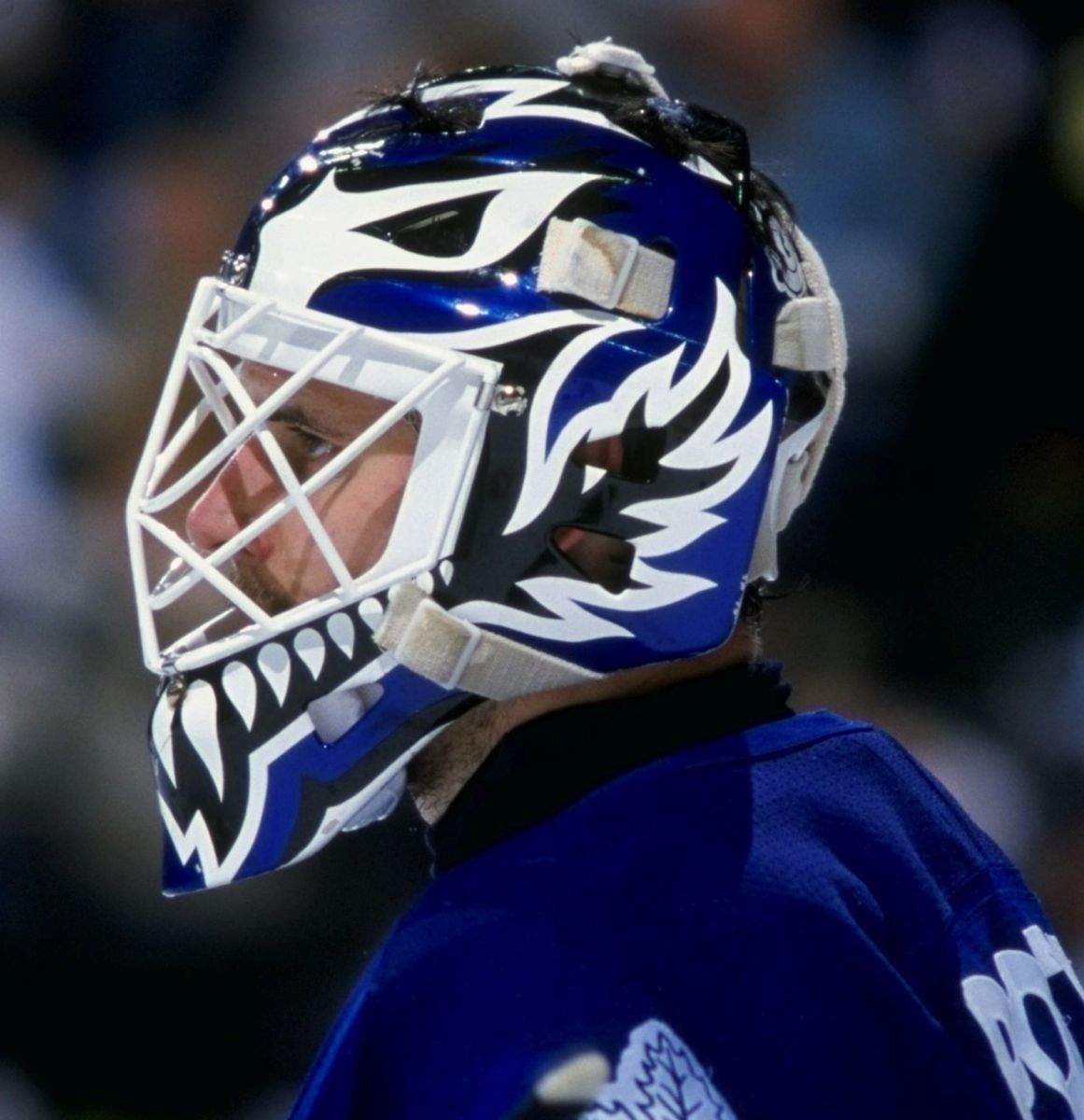 Potvin’s mask design followed him after his departure from Toronto, picking up notes from the teams he moved to while maintaining the key features of the primary design. That initial cat design has been era defining with goalies wearing homages to it to this day. 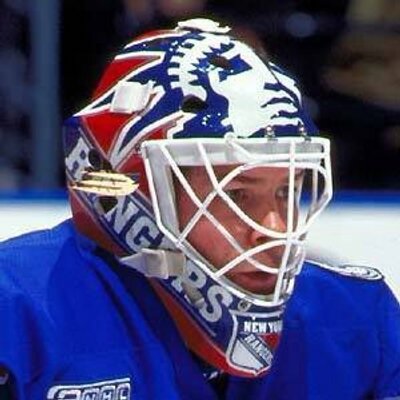 Richter’s Lady Liberty mask design may have helped inspire a jersey design as the Rangers introduced their incredible alternate jerseys while Richter was with the club. His mask design adorned the cover of Sports Illustrated after the 94 Cup win and was front at center for the United States’ World Cup victory. It’s legacy was so strong that Henrik Lundqvist wore a recreation for Richter’s number retirement ceremony just a few years back. 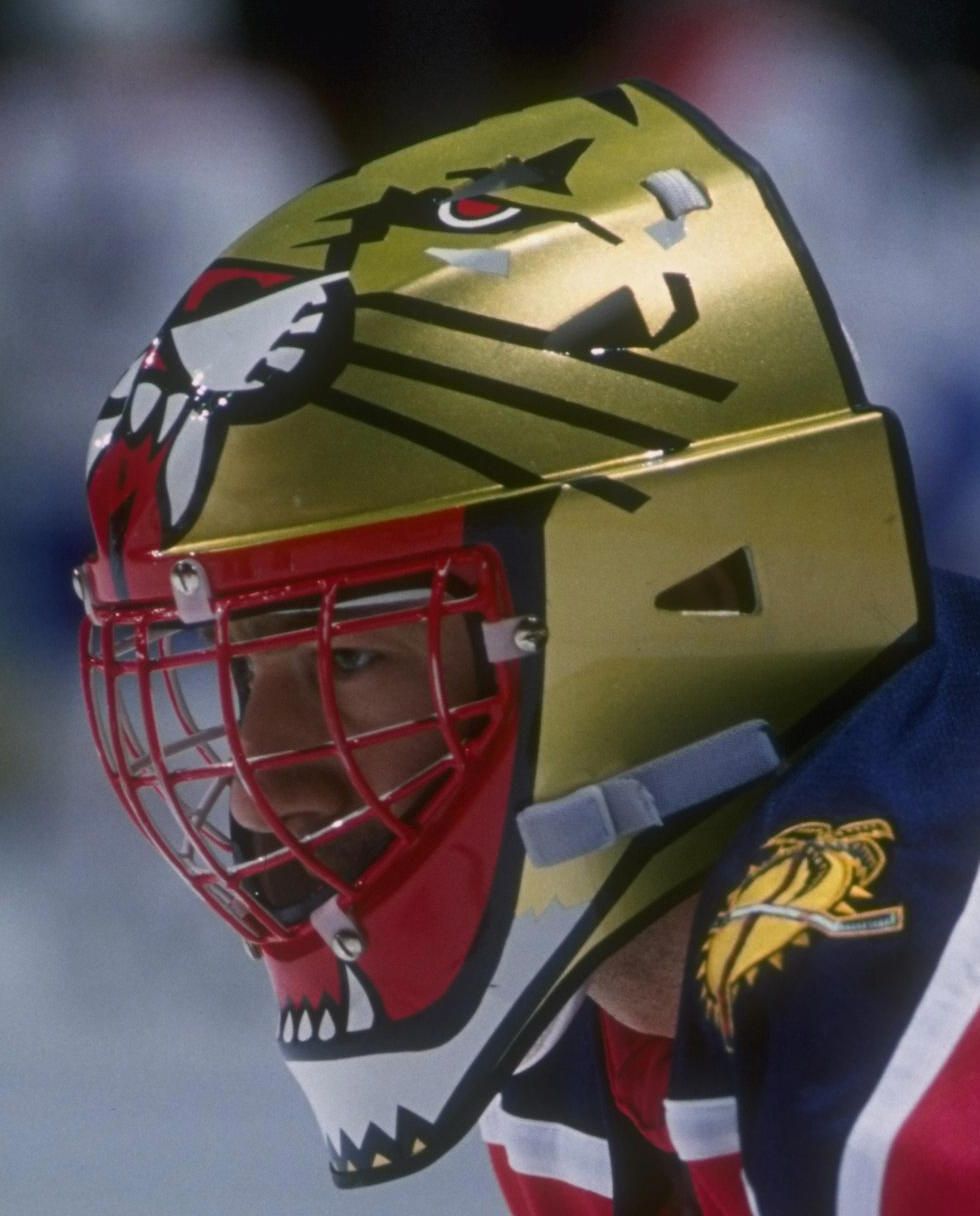 Maybe I’m wearing blinders but I think Vanbiesbroucks’ Panthers mask ranks among the absolute all-time best masks in NHL history. I won’t go so far as to say it’s the very best but it’s up there. It was a stunning design in the mid-90s and it’s still a stunning design today. A rare feat in the world of goaltending..