A lot of San Jose’s issues can be traced back to the goal crease. Martin Jones simply hasn’t been good enough for them and Aaron Dell hasn’t been any better over the last two years. The Sharks have been able to outscore their goaltending problems in the past, but they’re in a deeper hole this time around.

They, along with the Kings, Wild, Devils and Sharks are all likely looking hard for help in net. I can’t imagine the Blue Jackets are too comfortable with the tandem they start the year with either. San Jose is awfully high in the lottery race at the moment, and while I have faith they’ll climb out, there are probably some alarm bells ringing somewhere at the SAP Center. Hard to say what moves the Sharks would be looking to make, though. They have some legitimate young talent that’s set to become their new core while the core they’ve ridden for so long is slowly aging out. I can’t see them moving any of those young studs and they’re already short on picks after the last few seasons. I think if a worthwhile goaltending option presents itself, the Sharks will be in on it. Otherwise they’ll be getting an awful lot of TV viewers from Ottawa.

Pujlujarvi would be a smart gamble for the Rangers to take, in my opinion. New York is looking at a little taller task than originally thought after jumping up to second in the draft. Adding Pujlujarvi to their crop of young forwards would give them another dart to work with. They’re still in a position where they can spend a minimal amount of assets to grab another skilled forward to work with. And if he simply can’t hack it in the NHL, the Rangers can rest easy knowing how many other players they have to work with.

I like Hall as a rental for the Avs. They’ve got a few burners already and he’d make that stable even deeper. Adding Nazem Kadri was a good bit of business over the summer and chipping in another elite talent would make the Avs a true contender in the West. Who decides to throw a long-term offer at Hall is another story.

Friedman has noted the Devils were in the defenseman market earlier this year and it stands to reason the Habs would be poking around the Sabres blueline as well. Despite his injury, Marco Scandella strikes me as the most likely player to be shopped, especially to teams like New Jersey and Montreal who ostensibly have their top pairs sorted.

Without considering some of the other rumors that have been connected to the Sabres, the one key Jason Botterill must be focused on is shedding bodies and cap off the blueline. The cap is especially important to clear up if he has any other plans on adding skill to the lineup. So I’d presume a deal they’d be seeking with those two clubs would be for picks or prospects while working to open some cap space for additional deals down the road. 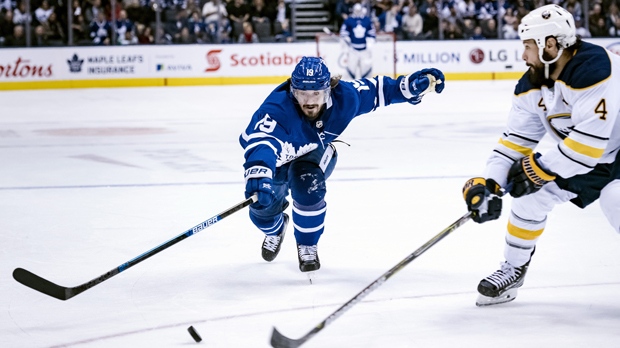 Aside from having to watch all the same jerks year after year, the other downside to not shedding any players off the roster is the lack of flexibility in terms of adding cheap help. Petan had a big junior career and the offense has been there at the AHL level too. He hasn’t been able to catch on at the NHL level with his longest stint being 54 games in 2014-15. If for no other reason than to find a fresh face lower in the lineup, I think he’d be a perfect player to try in Zemgus Girgensons’ spot alongside Johan Larsson and Kyle Okposo. Not only would it be another new face, but he’s cheaper than Girgensons and would offer the potential upside they no longer have with Girgensons. Instead, the Sabres have approximately 34 fourth line skaters, so grabbing Petan is a non-starter. He may simply be a 4A player as well. I happen to be a fan, so I’m a bit biased here. But there are a whole lot of different permutations the Sabres could try lower in the lineup that doesn’t include the same players over and over and over again.

I think another key for each of those teams has been goaltending. Carter Hutton has been terrific for the Sabres as has Darcy Kuemper for the Coyotes. I do have a small quibble on this regarding the Sabres “depth”. First, their depth has gone about as cold as it was last year. Something I’m sure every fan is pumped about watching all over. Also, when you have the likes of Girgensons, Sobotka, Larsson, Okposo, Lazar, Wilson and Elie (coughVeseycough) in the pipeline, the lack of skill can become overwhelming. A lot of this wouldn’t be as annoying if the fourth line could score a bit, or really any of the forwards not named Eichel, Reinhart or Skinner.