I’ve slacked a bit with my usual breakdown of 31 Thoughts, though I’m sure no one has really missed it. This is going to drop about five minutes before the newest edition hits, so I’m really batting 1.000 on this one.

I wanted to run it back though because last week’s version was packed with some interesting trade thoughts that I wanted to opine on. So, without further ado, here is a week-old version of The OT.

No offense meant to Elliotte Friedman on this, but I think Chris Kreider would be a good fit for like 31 other teams. He’s a big body who can absolutely fly. And he’s got a scoring touch to boot. I’ve never been a big fan, personally, but his skillset is terrific. If the Rangers opt to rent him they won’t be short on suitors.

I think Fiala is a very attractive option for a team that’s rebuilding and has ice time to offer a younger player like him. He’s two years removed from a 20-goal campaign and at 23 years old, he’s a great chip to add to a young forward core. To that end, Minnesota would seem like a decent spot for him to blossom as they’re well off the pace of the Central Division leaders and offering him a chance to become a core piece makes a lot of sense to me. As a buy low option I could see a team like the Rangers or Senators having serious interest from the perspective of stocking their pipeline with more young talent.

If you’re looking for a Sabres angle, I’m not sure there is one. Fiala is probably a buy low target, so from that perspective I love it for the Sabres. If you can add a 23 year old with first round pedigree and some scoring history, go for it. But I’m thinking they’re looking for more of a sure thing if/when they to add to their forward ranks.

Of the players mentioned by Friedman in this week’s column, Athanasiou is the one I’m most intrigued by from a Sabres perspective. He can fly and the offense has been there for a couple of seasons now (30 goals last year, back-to-back 15-plus seasons prior to that). He’d fill that open top-six winger vacancy the Sabres are working around nicely. I’m curious to know just how much value the Wings place on him. I’d assume they see (or saw) him as part of the future and would thus place a big price tag on the 25-year old. But as Friedman mentions, his last contract negotiation was a difficult one and his quiet start may have depressed his value a bit. Even if he settles as a 20-25 goal scorer, that’s a good piece for the middle of anyone’s lineup. Either way, if he is truly available, he’d be a player I’d love the Sabres to add to this forward group.

It’s been a tough season for ERod. I’ve liked him for quite a while. I think he’s a great bottom six forward who has shown the ability to move up in the lineup in a pinch. He possesses many of the qualities a team should value from a modern bottom six forward and it’s a shame his start has been so poor as he would be an asset to this team at his best.

The reality is that he’s very much on the outside looking in. The past few years worth of play would indicate he’s at least a better option as a bottom six winger than Vladimir Sobotka, but the way this year has played out, I don’t expect to see Rodrigues any time soon. If the Sabres have the option to get a decent asset for him, I think they should take it. At best, he’s an injury and a hot streak away from getting more playing time. At worst he’s locked in the coach’s doghouse and isn’t getting out. I’ll go one step further and say that simply trading him for a mid-round pick would be acceptable, but disappointing. Using him as leverage in a package deal is something I’d be very intrigued by, as it seems that more than a few teams see the value he could bring to the bottom half of their lineup.

And I would take a couple million bucks if anyone has it laying around. Good luck, Kyle. 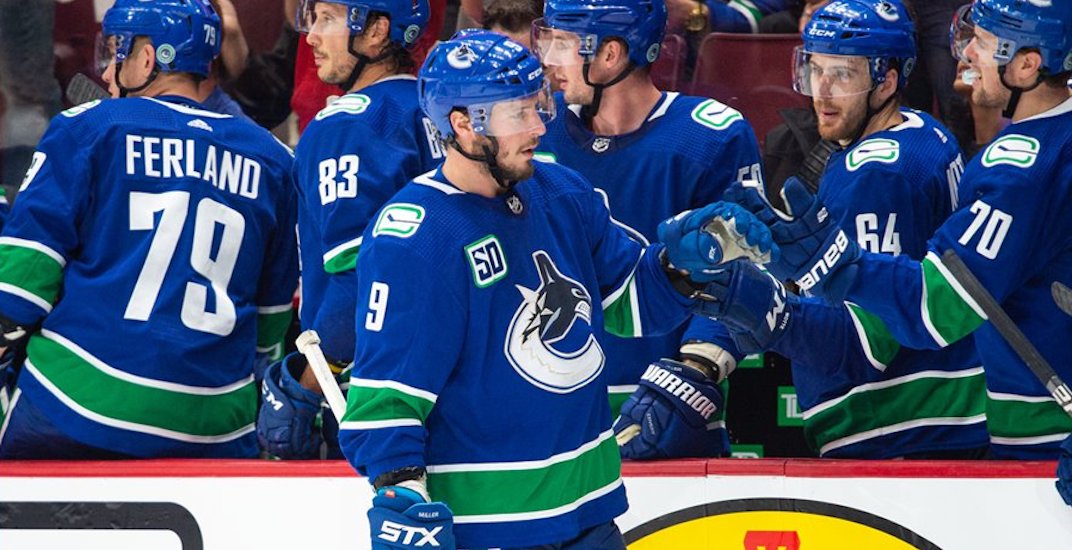 This is just a snippet of a larger section on JT Miller from last week’s column. If you haven’t read it yet, I highly suggest you do. There are a few very interesting tidbits on Miller which makes me that much more disappointed that the Sabres didn’t snag him.

He would have been a perfect addition for this team and the thought of him and Marcus Johansson solidifying the second line makes you wish for a time machine. I’ve been a fan of his for quite a while, so his early success makes me feel a little better about being so bullish on him. It’s also nice to see him doing it with the Canucks, as they’re a club I enjoy seeing win games. I just wish he was playing this well wearing blue and gold. The Sabres would’ve probably needed to work out a deal for Ristolainen in order to get Miller, so the deal would have been complicated. But he would’ve been a great add.

Highlighting this because Mackey has made an appearance at Sabres development camp previously and the Sabres pulled one former Maverick out of Mankato (Casey Nelson). Jason Botterill isn’t shy about signing defensemen, though I’m not sure how attractive of a destination Buffalo would be for Mackey given how many young blueliners the Sabres have in the pipeline at the moment.