The Sabres are about to get down to playing some honest to god, regular season hockey games this week. Before they jump in to games that count for something, they need to make a few decisions on their roster.

Preseason hockey is tough to take too much information from given the irregular rosters on a game-to-game basis. One night you could see an NHL-heavy roster and on another night you might only see three or four NHL regulars in the lineup. With that being the case, it can even be hard to be impressed by individual performances since the level of competition they can come against can vary so much.

There’s also the Preseason Pledge to consider. You can’t get too high or too low on a player or the team given the volatility of the roster during the preseason. But that can go out the window when Vladimir Sobotka skates on the second line and the coach says a lot of really nice things about him.

On the eve of the regular season opening, there seems to be more concern and annoyance than excitement across Sabres nation. Jason Botterill went out and acquired a handful of players who could really help this team turn a corner this year. Only, he forgot to get rid of anyone from last year’s group. This preseason was thought to be the one where we’d finally see some dead weight stripped off the roster. The likes of Sobotka, Zemgus Girgensons and Marco Scandella have been the most popular candidates in that regard. But with the season almost upon us, that’s looking more and more dire.

I, for one, seriously expected Sobotka to spend the final year of his contract in Europe. I’m glad I attached the caveat to my opinion that we couldn’t take solace in it happening until Botterill filed the paperwork. Given the state of the roster, Sobtoka seems to be safe. It’s disappointing for a number of reasons, primarily because Sobotka is bad at hockey. The silver lining here is that it appears that Sobotka is simply keeping Conor Sheary’s seat warm on the second line. He may just be the extra forward, meaning he’ll spend plenty of time in the pressbox this season.

Still, the fact that he’ll be an option to dress on a nightly basis is extremely disappointing.

I suppose there’s still a chance that we get surprised by the noon waiver notifications. But I’m not expecting any fireworks from the Sabres. That’s not to say they shouldn’t make some noise with their roster decisions. While about two-thirds of the roster was set before camp opened, I think there have been a few eye-opening performances the should have affected Botterill and Ralph Krueger’s thinking on the final 23-man roster. 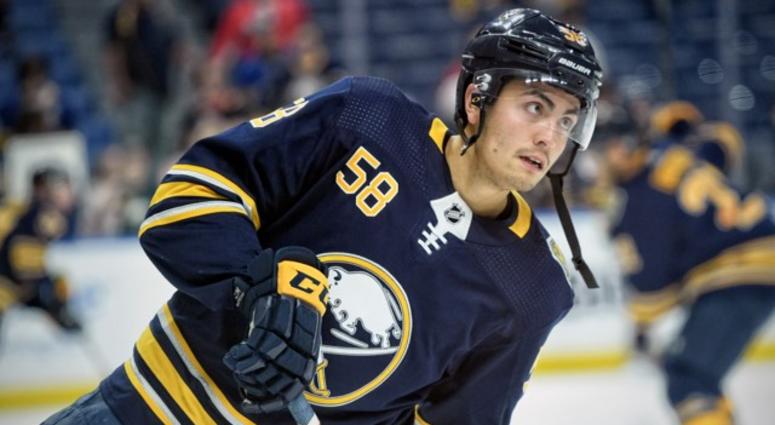 The Sabres don’t have a whole lot of defensemen they can trot out on the penalty kill. At least in a traditional sense of a penalty killing role. That may just save Scandella’s spot because Gilmour has done more than enough to justify sticking around. His speed is tantalizing, giving him an ability to recover from errors no one else would recover from. He’s adept offensively, showcasing a good, creative eye and using his speed to jump up into the play to be a threat on his own. I’d go so far as to say his assist in Pittsburgh was more impressive that the goal he scored in the preseason opener. He checks every box of a modern NHL defenseman and he deserves a spot on this team.

Meanwhile, Scandella has looked overwhelmed in almost every game this preseason. Even against inferior competition, he hasn’t been nearly good enough. How is he going to look when the games count and teams send their best? He is expensive and carries vaunted veteran status. However, if there’s one player the Sabres should choose to Robidas Island, it’s him. He’s been outplayed by Gilmour (and a couple of others) and he only has one year left on his deal. Put him on waivers and call it a day, there shouldn’t be any debate on the subject. It’s time to get better and keeping Gilmour over Scandella is a step in the right direction.

It sure would be nice if Zemgus Girgensons or Vladimir Sobotka were wearing different colors this season, but I’m not sure anyone’s wish will come true on that front. Plenty of people are calling for Kyle Okposo to move on to greener pastures as well. I’d certainly like to see that spot open up as well, but if I’m choosing between Okposo and Scandella, take note of the above section for my opinion.

All that is a long way of saying that I don’t see how Curtis Lazar sticks on the roster, despite playing well enough to justify it. Maybe he’d only be the 13th forward, but I’d much rather see what Lazar has to contribute than going through another season with Girgensons or Sobotka. Lazar hasn’t looked like a world beater in any sense of the word, but he’s looked far more interesting than any of the usual suspects from Buffalo’s bottom six. Given the state of the franchise, that’s more than enough reason for me to want to see a fresh face in that spot.

No, this isn’t a reprint from last year. Tage Thompson had himself a pretty nice preseason. He looked far more engaged at both ends of the ice and he certainly helped his cause by showing up on the scoresheet a few times. I’d be willing to bet that shootout goal was another credit in his favor, as that specialist ability is something coaches typically value. I didn’t think there was a spot for him entering camp and I still don’t know exactly where he’s going to fit in.

Perhaps he again feasted on sub-par competition and he’ll disappear for long stretches as he did last year. His waiver exempt status and the benefit of tearing up the AHL wouldn’t be the worst thing in the world. But he certainly looked more effective over the last few weeks, so don’t be surprised if he sticks around once again. Now if they could only get him a better number.