One of my very favorite parts of the hockey schedule is upon us. In addition to the start of the season and the opening of the first round, the time surrounding the draft and start of free agency is an exciting few weeks. You typically have a spate of trades and, of course, the drafting, signing or acquisition of new players. For a team like the Sabres, that’s been dragging through the league’s basement, those new bodies are an opportunity to see things finally get turned around.

This draft week may be particularly exciting as the Sabres 50th anniversary is to officially begin. Kim Pegula noted this at the NFL owner’s meetings and many are expecting to see the team’s third jersey unveiled at the draft. The jerseys have been a point of contention among fans since the team doesn’t appear to be switching to royal blue as so many have clamored for. This week’s first question is regarding the jerseys and the one thing I’ll add regarding the uniforms is that even if they’re terrific, there’s going to be a built-in level of disappointment with the fans since they won’t be royal blue. While I’m happy to wait and see the final product, the team could have avoided at least a little bit of contention by listening to the fans and introducing a royal blue jersey. Although I’m still looking forward to see what they have to offer.

Michael/@michaelparthum – What should #Sabres fans prepare themselves for as far as 50th Anniversary jerseys go?

I’ve gone through a few cycles on the Sabres anniversary jersey. A few people I’m friends with who are in the know on this provided me some preliminary information on the jersey that had me pretty nervous. The reports of a mostly white uniform, Vegas gold and a few odd tidbits on the logo left me preparing for some significant fallout. But I’ve really softened on that stance over the last few days.

I’m a big fan of Vegas gold (think metallic gold) and navy blue. Those were my school’s colors and it seems to work pretty well for Notre Dame. Ironically enough, one of the main sets of redesigned jerseys from the Sabres Not Slugs website from back in the day utilized Vegas gold instead of sport gold. So from that perspective, I’m keeping an open mind. Confident even in the potential results.

I’m also a huge proponent of white gloves. If the Sabres gloves are white based with a navy cuff and Vegas gold lettering, I’ll be over the moon. White pants are a no-go for me and I’m still waiting to see what the crest looks like. If they go overkill with the metallic gold trim it could be a travesty.

Overall, I’m looking forward to the launch. New jerseys are fun and if the design is good, we’re all going to be pumped. Of course, I was pretty jazzed for the Turd Jersey until that finally dropped. So, maybe take all that with a grain of salt.

Andrew/@uttarosports – What do you expect from Ralph Krueger’s coaching style for the Sabres?

Tough to say as his European World Cup of Hockey team altered their approach to a more conservative, puck possession style after their pre-tournament games. Their underlying numbers were rough due to the talent gap but they fared well. He was probably on track to some success in Edmonton had he not been fired, but ultimately his style is sort of up in the air.

The European all stars and the Swiss Olympic teams were never heavy favorites, so they never had many opportunities to impose their will. He should have a slightly better pool of talent to work with – though that European team had plenty of studs – so I’d assume you see a more attacking style.

He’s also noted as less of a tactician and more as a motivator type coach (more on that later). So maybe he comes in with more of a general philosophy that his assistants will implement. My hope is that we see a system that emphasizes a quick transition game and a simplified defensive zone structure.

Global warming, bees are dying at an alarming rate and the fact that the organization seems to be dragging their feet on switching to royal blue uniforms (though it’s somewhat out of their hands).

Rob/@lazytown716 – So when RK starts dropping ‘culture’ references will you 1 – let it go he is new after all 2 – make note of it but not let it bother you, too much 3 – express mild concern for how frequently he uses this word 4 – place your cache of Wildfire beneath KBC and detonate

It’s already in the back of my head but I do subscribe to the theory that you need some baseline for your team’s culture. Winning ultimately cures those issues but if the locker room is a cesspool from the get-go, you’re fighting a losing battle. So things like buy-in and effort and all that will be buzzwords for a while, and I’ll be fine with it.

The problem will be in February and they’re eight games under .500 and the first thing out of his mouth or even the GM’s mouth is the need to establish their culture. I’ve gotten a Ted Nolan vibe from him already and I’ve mentioned it here and on the podcast. He’s definitely closer to Nolan in terms of many of his advertised strengths. And maybe that’s what these guys need. Bylsma was heavy into the systems and it seemed to get too heavy handed, Housley maybe couldn’t communicate what needed to be done (and badly misused his players) and now here’s the guy whose billed as a motivator first and a tactician second. I’m always going to have a pretty open mind to new hires but if you feel culture and those things are red flags, your Spidey Senses may be tingling.

Phil/@pmunny59 – Does Risto go or stay and what’s your price? I’ve seen a couple of yours mostly revolving around Tampa. I agree or Las Vegas? Tell me I’m dumb with Vegas I just see they are cash strapped.

Vegas may actually make more sense than Tampa in some ways. They’re in the other conference, the guy whose name has been making the rounds the most (William Karlsson) fits Buffalo’s needs perfectly and the Sabres could take David Clarkson’s contract and not have to worry about bogging down the fourth line with another body. However, Cap Friendly already has Vegas over the projected $83 million cap, so taking on Ristolainen would be difficult to say the least. 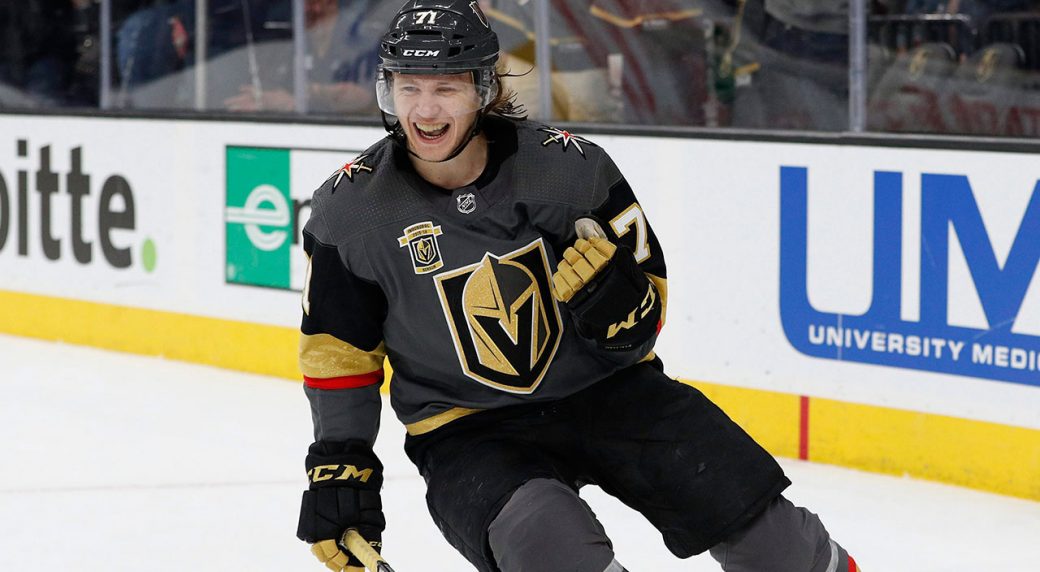 As for trading Ristolainen, I’ve touched on this a few times. He’s so incredibly divisive within the fanbase and I know plenty of people are terrified to see another player move on to greener pastures and flourish away from Buffalo. After years of saying it “always” happens the self-fulfilling prophecy was actually fulfilled by Ryan O’Reilly. Therefore, trading a guy whose physical tools are so tantalizing will make people nervous.

I’m to the point where I think a change of scenery would do him good and would rid the Sabres of juggling him on the roster. His underlying numbers indicate he needs to have his usage dialed way back but his skills are that of a top-four defenseman. I think his underlying numbers are leaned on a little too heavily at times. I’ve seen people say simply scratching him is going to be addition by subtraction on a nightly basis, which is a ridiculous opinion to hold. Just as I find it amazing that after so many games with the Sabres, we still think this leopard can change his spots. For my money, he is who is his at this point. You need to shelter his usage a bit but he’ll produce on the power play. If you’re able to rein in him chasing checks, his edge may wind up as a positive. But too often he’s been chasing well away from the play to finish and otherwise worthless check.

His salary is indicative of a top defender but his momentary lapses are not. Rather that continuing to overuse him, as he has been for years, or roll him back to much lower minutes and feel like you’re throwing away money, get some return for him and reassess your needs.

I will say that if he’s moved, it has to be a good trade for the Sabres. No matter what you think of his play, this isn’t someone they can take minimal return on. An NHL body is almost a requirement at this point, which makes swinging a deal that much tougher.

Kona Big Wave. By a mile. Technically it’s not a summer beer since you can buy it whenever you please but it’s a perfect summer beer. It has a ton of flavor despite being nice and light. It’s super crushable too, so it’s really tailor-made for a hot day at the beach or a party. I can’t recommend it enough.

Jim/@jiml77 – Is Binnington going to be a solid number one going forward or might have had lightning in a bottle these playoffs? Some guys were great runs then had mediocre careers ex, Ward Car ‘06, Niemi Chi ‘10 Hedberg Pit ’01.

It really wouldn’t shock me if he came back down to earth next year. That’s the battle the Blues are fighting internally. You can’t possibly balk on the dude who just carried you from literally dead last in the league to the Stanley Cup, but his resume is thin and the risk of regression is real.

Most people are noting that he never tailed off in the postseason and that’s a reason he may not falter in the future. I’d tend to agree with them on that point as Binnington seemed to have worked out some aspect in his game that desperately needed changing over the last two years. There’s no direct correlation to AHL numbers and NHL success for goalies, but Binnington’s stats with San Antonio this year were tidy and that was following another very strong season in Providence. Providence being where he was famously loaned to after refusing to go to the East Coast League on St. Louis’ wishes.

What’s working against him is that he was drafted in 2011 and has finally just worked out his issues to climb into the league. That only makes him 26, so he’s got plenty of time, but the negatives of that resume will linger just as the positives do. It wouldn’t shock me in the least if he became a middle-of-the-road starter, but I don’t think he’s going to suffer a regression like Andrew Hammond did.

It’s been a while since I’ve done this, but let’s get back on the horse with some funny Cap Friendly Armchair GM moves. This one has a whole lot going on. The trade up from seven to four feels like way too much to pay but also way too little compensation given the big question marks surrounding Rasmus Asplund and Tage Thompson’s long term outlook. Also, trading up exclusively to take Bowen Byram and that triggering not only a trade of Rasmus Ristolainen but signing Braydon Coburn as a free agent is…curious.

I’ll highlight this particular trade, from a different Armchair GM. It really captures the “here is some crap for your good player” nature of the Armchair GM feature.