After having a bit of fun on Twitter I felt that I might try out a new feature on the blog. Drawing inspiration from Justin Bourne’s System Analyst series, I’ll pick a play from a recent Sabres game and break it down frame-by-frame to see what exactly went wrong in that given moment.

Sometimes it will be a goal against, sometimes a goal for. Saves will be on the menu as well with my goal to add a little humor and a little clarity to various moments over the rest of Buffalo’s schedule.

The first edition covers Tampa Bay’s lone regulation goal from their 2-1 shootout win on February 21. The Sabres managed to take an advantageous offensive position and turn it into a goal against in roughly nine seconds. Here’s what happened. 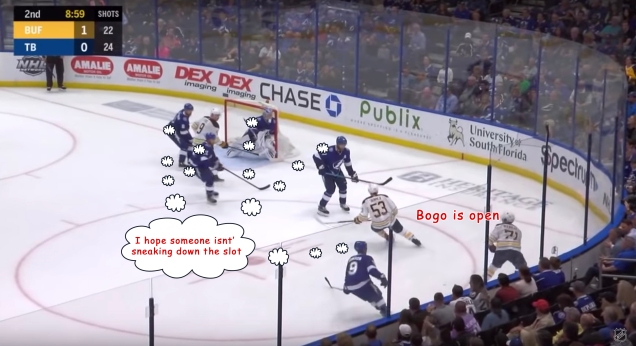 Rodrigues sees Bogosian wide open in the slot and sends a centering pass for what should be a prime scoring chance. 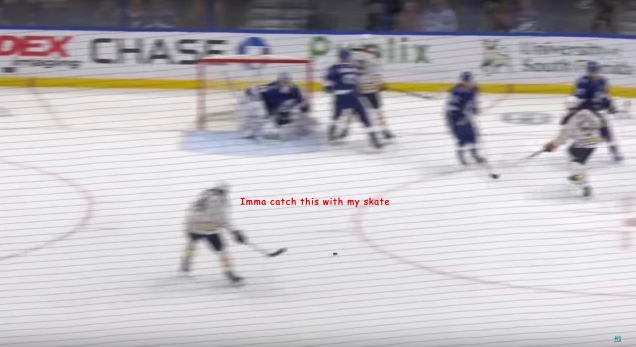 Bogosian is…really open and slow motion and freeze frames sure make it look like the pass is right in his wheelhouse. The full speed replay is more forgiving to him, for what it’s worth. Either way, Bogosian tries to catch the pass with his skate and his lack of success becomes problematic.

The puck winds up behind him with Nikita Kucherov swinging through to pick up the puck with speed and numbers. 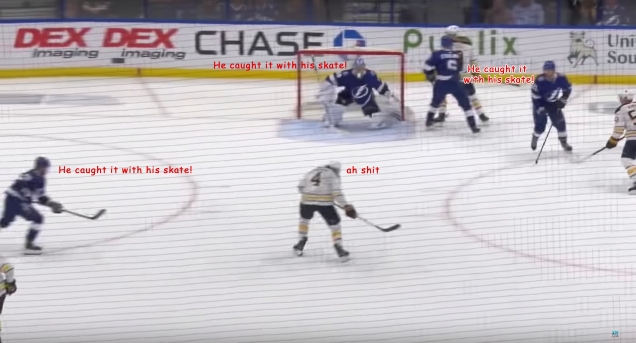 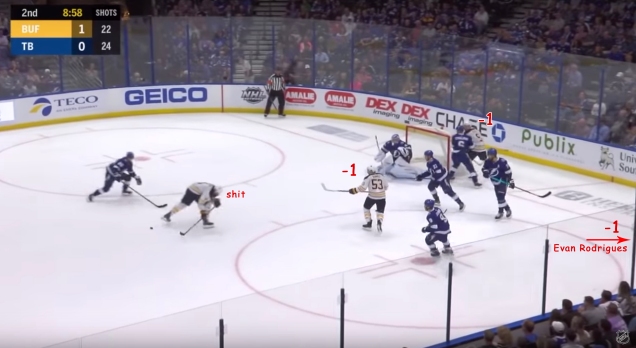 Kucherov is Johnny on the spot as Bogosian fumbles the puck and as you can see Tyler Johnson is the next closest Tampa player moving up ice as the puck comes free. Rodrigues has continued to swing low and Eichel is proceeding around the net as the centering pass was made. Skinner is the only Sabres forward in a position to attempt to lend any support as the play changes direction. Rasmus Dahlin is the only man back and even he was moving against the flow of the play.

Dahlin never gets to turn and face the play and Skinner is the first man back but too late to make a difference. They both do a great impression of EA Sports AI defense in an attempt to break up the pass. It gets through and Kucherov nets his league-leading 100th point on a beautiful finish of Johnson’s feed.