Just two days after watching Frederik Andersen steal two points on the road, Robin Lehner pulled the same stunt at Scotiabank Place, making 32 saves as the Sabres snuck out of Ottawa with a win.

In what is becoming something of a tired refrain, Lehner played another spectacular game for the Sabres on Saturday. Lehner’s 32-save effort secured the fourth-straight game with a save percentage of .930 or better. In fact, five of Lehner’s seven starts this year have seen the netminder turn in a save percentage above .930. The other three starts resulted in .900 or below performances, although one of those three came against Vancouver where Lehner still allowed only two goals.

Saturday was easily his best game of the year, as Buffalo struggled to score yet again and Lehner put the team on his back, to keep the one-goal game in Buffalo’s favor. He had at least four truly highlight reel saves, including a desperation paddle save and a terrific left-pad stop on a two-on-one.

Perhaps his best technical save came in the third period with the score still tied at one. A sloppy change by the Sabres left Dmitri Kulikov in a bad spot trying to chase down a loose puck. As a result of the confusion at the bench, Kulikov is stuck trying to defend a two-on-one that developed quite quickly. 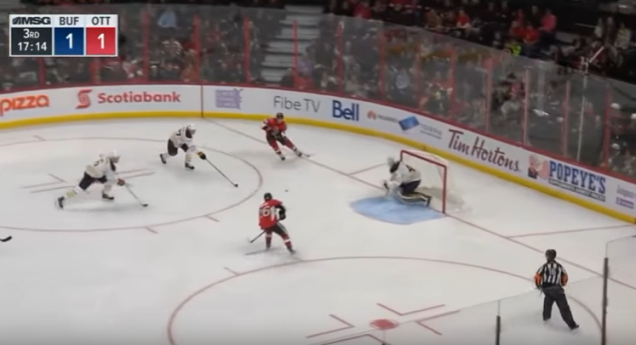 Matt Puempel winds up being wide open in the slot, giving Lehner a fairly easy read but a difficult save to make. 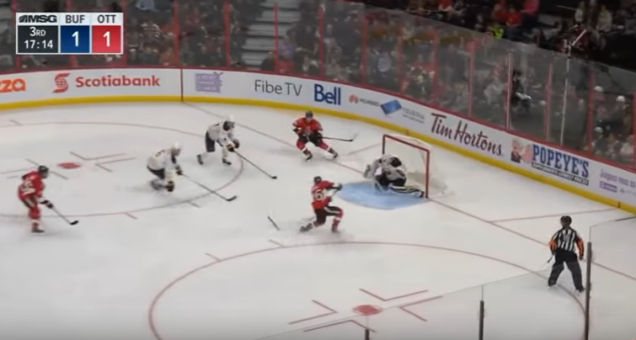 Lehner gets across the crease just as Puempel is connecting on the shot. As the play develops Lehner actually moves out of the crease to further attack the shot. As he’s coming to face Puemepl, Lehner is big and in terrific position in the event the puck is going to be up off the ice on the one-timer. 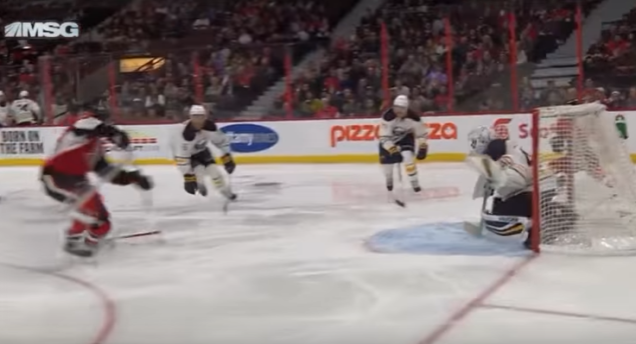 Lehner makes the save with his pads as Puempel probably didn’t the puck up as high as he wanted on the shot. Lehner also does something we saw in Calgary and that is drop to a paddle-down position. It’s better illustrated here at the point of the save: 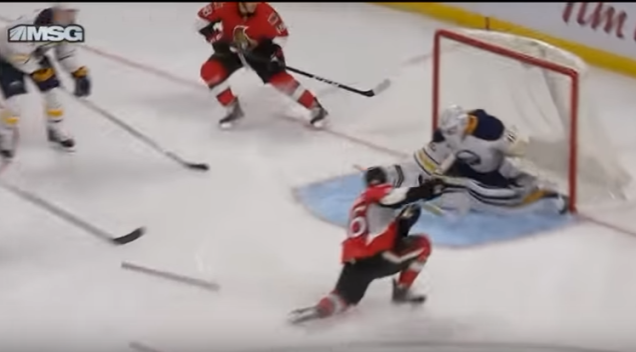 What differs here compared to the play that resulted in Calgary’s winning goal is that Lehner is attacking the shooter rather than waiting for the puck to come to him. He’s also attacking a one-timer where he can better expect where the puck will end up.

It’s a terrific save that sees Lehner keep terrific form to make a big save in a big moment, a cliche so many fans love to tout about Buffalo’s goaltenders.

Lehner’s play this year, in my opinion, has been phenomenal. He was even stellar against Calgary in the moments prior to and after the tying goal. He made at least three or four game lengthening stops in OT before Monahan’s goal. Perhaps it’s because of the price Murray paid to get him that fans still think he’s overrated, but I think it’s time for fans to start looking at Lehner as a proper starting goaltender and not as a replacement-level goalie who is easily replaced.