Make no mistake, plenty of responsibility from the loss in Calgary sits with Lehner. After staking a lead in the third, Lehner was beaten on an otherwise nondescript shot by Matthew Tkachuk. It’s a shot that should be stopped 10 out of 10 times. Tkachuk is outside the dot with no threat of a backdoor pass. While Lehner gets out of the blue paint to challenge, he doesn’t make the final necessary adjustment as Tkachuk changes the angle for his shot. The subtle extension of his stick (pictured below) drastically changes what the puck is seeing, making for the short side tally that ties the game.

In the case of Tkachuk’s goal it’s just a simple case of needing a save. Lehner had played a strong game to that point, but that gaffe is likely going to stand out most from regulation.

Perhaps the biggest enemy to the Sabres in the Saddledome were the referees. While the puck was certainly loose on Calgary’s first goal, the rules on intent to blow are fairly straightforward. Yet, the league’s referees managed to find a way around a rule that otherwise is quite inflexible when it comes to post-whistle goals. I’ll touch on the blatant boarding penalty momentarily as the unfortunate bounce off the referee’s skate that led to Micheal Ferland’s goal was the third instance where a striped jersey managed to negatively influence Buffalo’s outcome.

The bounce of the skate is really the primary culprit in the goal that tied the game at two. However, I will contend that Marcus Foligno made a poor choice in attempting a lateral backhand pass in his own zone. He had two forecheckers in his face, a winger on the boards and Rasmus Ristolainen just off the crease.

While Sam Bennett makes completing a pass to Brian Gionta a tougher proposition, there’s far less risk in chipping up the boards to Gionta than a higher risk pass to Ristolainen, which he ultimately makes.

What we see in the moment just prior to the pass is Bennett crashing down on Foligno and cutting off the easy pass to Gionta. However, Gionta isn’t completely eliminated from the play. Getting the puck to him on the wall provides two options. A simple chip and chase past the defenseman, or a chip pass to Johan Larsson as the breakout likely calls for. The latter play is what is illustrated in green. 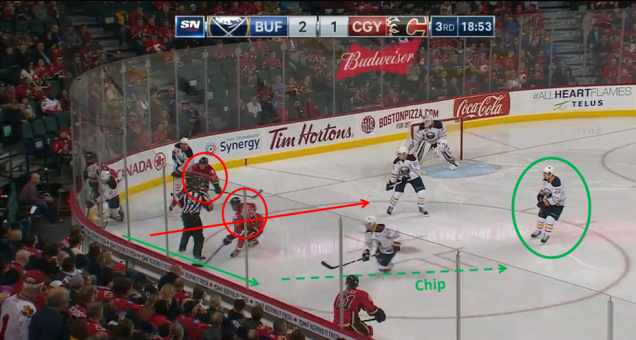 Instead, Foligno attempts the riskier pass which is impacted by the referee who is clearing space on the boards as the play moves out of the corner. Aside from the unexpected risk of the referee impacting his pass, Foligno also isn’t taking into account Ferland’s presence coming out of the corner and Bennett’s pursuit as well. He’s attempting to squeeze a puck through a tight window in the defensive zone, something that’s rarely advisable.

What I’d really like to focus on is the winning goal and not so much for the obvious boarding penalty committed on the play, but for how Lehner didn’t play the breakdown by the book, so to speak. 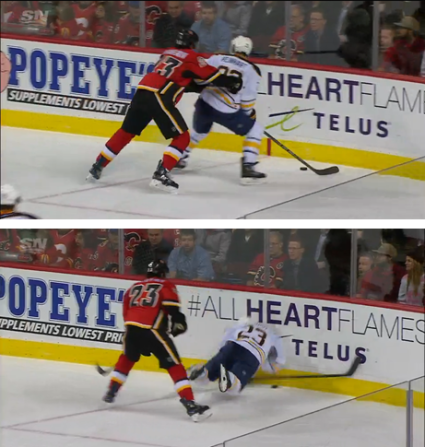 Everything kicks off with Monahan cross checking Sam Reinhart squarely between the numbers. How this wasn’t called is astounding to me and if you’re unsure if it fits the requirements for boarding, I’d point you to this link. It was an obvious penalty and the lack of a call led directly to this loss, so in all honesty it was a pretty typical Tuesday for an NHL referee.

Once Monahan claims the puck, he cycles up around the zone, triggering the play that leads to the winning goal. Monahan, Mark Giordano and Johnny Gaudreau play a quick three man game that leads to all three Sabres stuck puck watching (except maybe Reinhart) as Gaudreau steps off the wall. Monahan takes advantage of their focus on the puck and fills the slot which is exceedingly open.

As Gaudreau is a threat to shoot, Jake McCabe is forced to step to him rather than staying home and potentially picking up Monahan as he heads for the back post. As both McCabe and O’Reilly are stuck in no man’s land, it makes the pass Gaudreau makes rather straightforward.

This is when Lehner gets in trouble. He’s not fully in position when Gaudreau is on the wall, but he doesn’t have to be in a full crouch as Gaudreau is far more of a passer than shooter in that case. However, as the pass is completed Lehner is behind the play, which leaves him fewer options when it comes to stopping Monahan once the puck is on his stick. 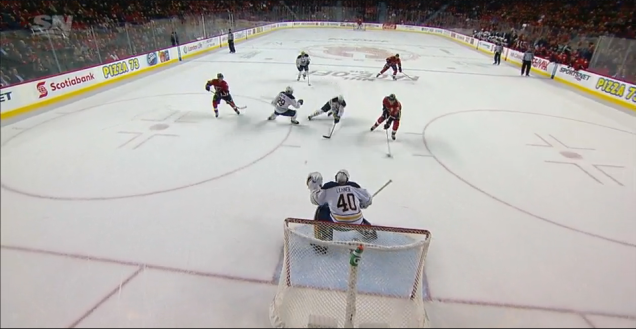 I have a feeling this has something to do with the long possession Calgary had in the zone prior to this shift. The Sabres were unable to clear on multiple occasions, leaving Lehner to make a number of key saves in tight situations. It’s likely he was feeling the fatigue of that possession along with the rest of the game as this play developed.

That’s not an indictment of his endurance either. You could take any goalie in the league and see similar signs of fatigue after the possession the Sabres had allowed just prior to this. As a result, however, he drops early in an attempt to shut down a short side deke attempt from Monahan. It’s probably not the most advisable choice as it left him open to a deke to his glove side along with a shot up over his shoulder, which Monahan eventually does.

What confused me about Lehner’s choice wasn’t that he went down but that he dropped his blocker into a paddle down position. He’s moving left-to-right on the play and if he keeps his chest and gloves up, he likely makes the save on Monahan’s shot. However, he drops his blocker, choosing to go paddle down and opening the top of the net.

This doesn’t make sense for more than just the obvious: opening the upper portion of the net. It also limits his ability to poke check and defend against any sort of deke going to his glove side. Perhaps the fatigue factor came into play here but I was confused by the save selection, to say the least. 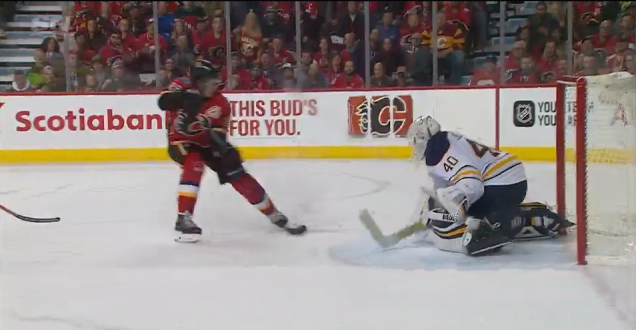 It was a tough way for this game to end in just about every aspect. A poor missed call, missed assignment and questionable save selection tick off just about every square on the bingo board. I’d say that this probably qualifies as the weakest of the three games for Lehner thus far despite the numerous gems he produced throughout the contest.

We’ll see how he bounces back through the remainder of the road trip and where his numbers stand once the month of October is complete.