Maybe the season isn’t over after all! The return of Kyle Okposo and Dmitri Kulikov gave the Sabres a much needed shot in the arm for their trip west.

Kulikov was out for both Edmonton goals but also did well distributing the puck on the breakout throughout the game. His first pass is terrific and I suspect his impact will be that much stronger if and when he’s paired with Rasmus Ristolainen as the season progresses.

Okposo was the real star, however. He scored his first goal in a Sabres uniform minutes into the first and then set up Ryan O’Reilly with a beautiful pass on a powerplay later in the first. His skill is evident and although it was only one game, it’s hard not to say that he adds a dynamic to the roster they were lacking against Montreal and throughout last season. At the very least he pushes talent down the depth chart, at best he’s another dynamic offensive weapon to add to Buffalo’s growing arsenal.

Last night could have easily gotten away from the Sabres. The Oilers have started the season on fire with Connor McDavid garnering early whispers for an Art Ross run. Buffalo’s hot start was quickly erased by a pair of odd-man goals from the Oilers in which two rebounds found the back of the net to tie the game. Luckily the Sabres righted the ship and cruised to a comfortable 6-2 victory. But the two quick goals and another big opportunity early in the second could have really shifted the tone of this game.

Often with rebound goals the first person to receive blame is the goaltender. If a juicy rebound ends up in the slot it’s probably the fault of the goaltender for not controlling his rebounds. This is true to a degree as there are certainly times bad rebounds end up in prime scoring areas. Other times those same rebounds are a result of well placed shots.

Look no further than both Edmonton goals last night. On the first, Robin Lehner took a shot up high on his right shoulder that eventually caromed off Benoit Pouliot’s shins and in to the net. Most shots up at a goalie’s shoulders will handcuff them to an extent. Even on the glove side where there’s more mobility, it’s not an area you have much control over. The puck can die and fall at your feet just as easily as it can shoot back out into the slot. For his effort there was very little Lehner could have done, especially considering Pouliot was in the way more than a shooter on that rebound anyway.

It was the second goal that I want to dive into deeper as part of our post-game series. On the second goal Lehner’s right pad save put the puck right on Milan Lucic’s stick for the tying goal. Another bad rebound? No, a well placed far-pad shot by Leon Draisaitl.

The play itself fell off the rails early as Kulikov caught an edge as he attempted to retreat out of the zone. His stumble gave Lucic the lane to hit Draisaitl and create a two-on-one right at the red line. 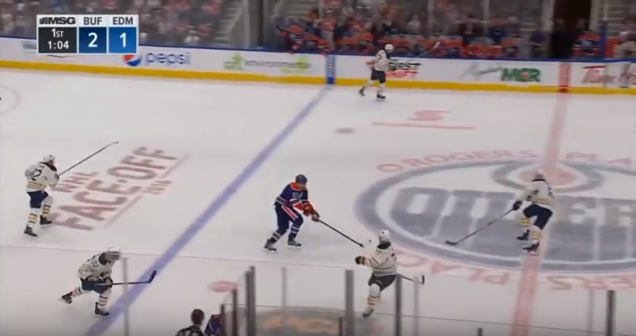 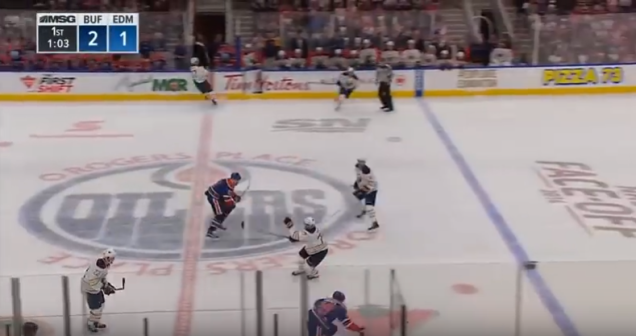 That second frame really shows the damage Kulikov’s stumble did to the play. Draisaitl already has momentum and a head start on Kulikov as he tries to turn and stay in the play while Franson is stuck in no man’s land. On a slightly related note, Johan Larsson, in this frame, is still in a position to skate hard and get back into the play as a backchecker. By the time the puck is in the net, Larsson is a non-factor on the play.

As Draisaitl moves in on goal the two-on-one really develops. Franson, who was somewhat flatfooted himself is stuck turning to skate with the attacking players while Kulikov is left chasing the puck carrier. Still, at this point Draisaitl is more of a shooter than passer and Lehner is playing him as such; well outside his paint, cutting down the angle. 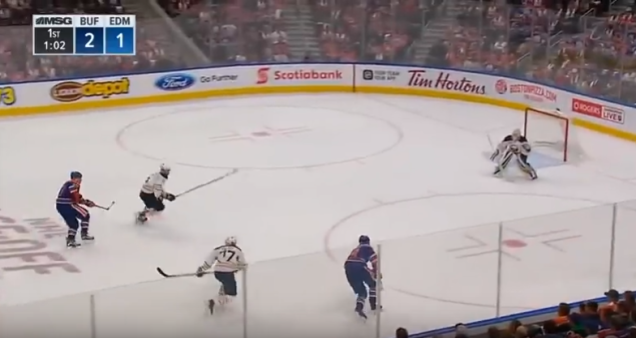 Where things go wrong for the Sabres is when Franson commits to diving at Draisaitl, leaving his backside coverage and violating one of the fundamental rules of a two-on-one (leave the puck carrier to the goalie). Here you see Franson begin to fully commit to Draisaitl while Lehner still holds his ground on the top of the crease. If Franson simply finds Lucic, Kulikov’s pursuit of Draisaitl likely results in a relatively harmless shot on goal.

The red line shows the side of the ice Franson is currently responsible for. Not all two-on-ones are built the same, so the old adage of leaving the shooter for the goalie isn’t always correct. However, in this case it’s certainly true. Any threat of a pass or rebound opportunity sits on the left side of the red line on the image. If Franson stays home there’s no second chance opportunity. 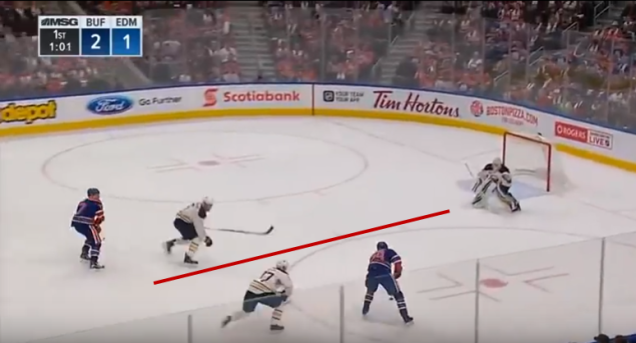 This is the moment just before the goal. Lehner has made the save on top of his paint and the puck kicks out to the slot as Draisaitl did very well to place it on Lehner’s right pad. It’s a shot placement that gives a goalie very few options. It’s not up in his hands where he can punch out the puck with his blocker but in his feet. A shot coming from the boards to a goalie’s far pad will result in 99.9% of rebounds will ending up in the slot. It’s a great play by Draisaitl and sets up Lucic for an incredibly easy goal.

Also in this shot you see Franson’s futile dive opening Lucic for the easy rebound goal. Had he stayed in lane he likely ties up Lucic and the puck heads the other way as Buffalo’s backcheckers pick up the rebound. 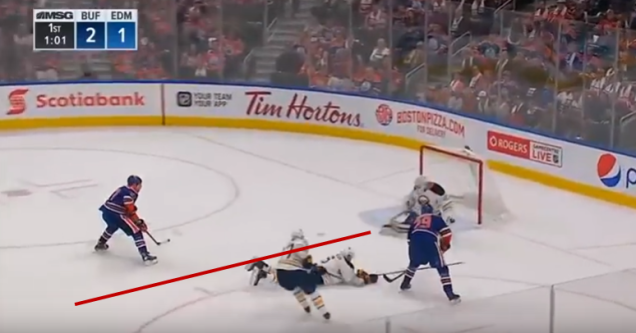 The end zone shots do an even better job showing what Franson’s decision did to alter the play. He’s originally in a position to take away the option of a pass or rebound by simply playing the rush safe. As he dives he goes from having good position on the second man to taking himself completely out of the play. 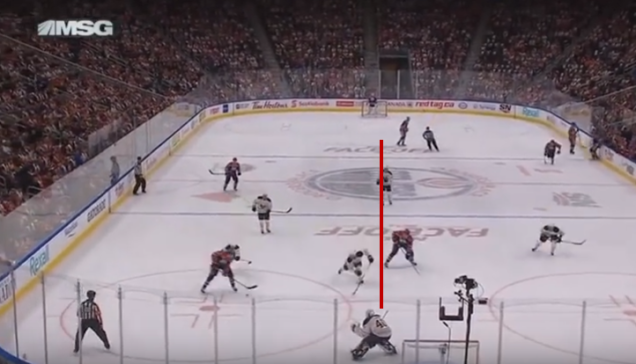 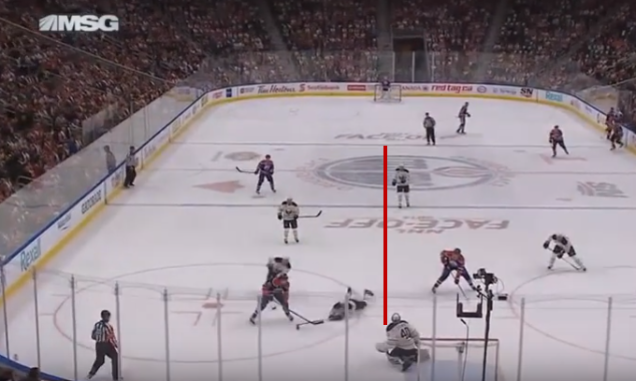 It’s a tough way for a play like that to develop as Franson was likely scrambling as both he and Kulikov had been caught flat-footed in the neutral zone. Franon’s decision is likely based on trying to cover for his partner as the play got away from them at the blueline. What this wasn’t was a simple case of poor rebound control. Yes, Lehner kicked the puck out into the slot but a perfectly played far pad shot left him with no other options for where the rebound was going to end up. Losing the defenseman who could clear the rebound led to the goal that tied the game at two.