With precisely 20 games left on the schedule, the Sabres have worked their way deeper into the divide in the fanbase following a 6-3 triumph over the Vancouver Canucks.

Torrey Mitchell scored twice, Chris Stewart added a goal and an assist but most are left scratching their heads over where the tank stands and what to make of Buffalo’s recent string of hot play. 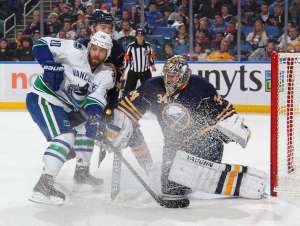 The Sabres capitalized, once again, on substandard goaltending as Eddie Lack turned in a .783 SV% on a night in which he was only tested 23 times. Tonight’s win marked the third time this season the Sabres managed to shoot better than 20% in a game – the other two coming against San Jose and Calgary. Lack was strong early in the game, getting hung out on an early two-on-one and getting some unwanted assistance from Adam Clendening on Stewart’s breakaway. But he made a few impressive stops, including a dazzling glove save on Cody Hodgson in the second.

The wheels fell off for the Canucks in the third as Andrej Meszaros cleaned up a sloppy no-look pass from Nick Bonino and put the puck through a screen for Buffalo’s third, while Mitchell cleaned up some garbage in front to put the Sabres ahead for good. Brian Flynn’s security marker at 18:28 came after Lack misplayed a loose puck badly and Stewart found Flynn to cash on the empty net.

There wasn’t much that stood out in this game despite the nine-goal score line. The Canucks cycled the puck with ease for long stretches and on two occasions, turned their cycles into goals. However, they struggled to maintain control over the Sabres and were routinely chasing on the counter-attack.

In fact, this week’s savior, Michal Neuvirth, wasn’t forced to make countless game-saving stops. He finished with 28 saves on 31 shots and was challenged intermittently. If there’s one thing that Ted Nolan and his staff have figured out this season, it’s how to clog the interior of the defensive zone. Even on their long cycles the Canucks were forced to keep the puck to the outside and work to exploit openings. It worked a pair of times and led to a fairly lopsided Corsi number (57-32), but there was very little dominant offensive flow from the Canucks side. Unlike, for example, the dominant effort the Rangers put on the Sabres on Friday.

Interestingly, the Sabres second six-goal effort of the season has elicited little more than hand wringing or celebration, depending on your outlook of the Sabres current tank. The Sabres are enjoying a run of somewhat competent hockey that is not unlike the streak that started pushing them up the standings in November and December. They’ve done it on the back of phenomenal goaltending and some ridiculous shooting numbers. The Sabres have shot 18% over the past two games, scored a pair of layups thanks to terrible choices by goaltenders and even potted a tap-in after a blind shot deflected off Brian Gionta’s ass and onto the stick of Torrey Mitchell.

It’s easy to look at the fancy stats and Neuvirth’s career numbers and some of the bounces the Sabres are getting and realize that things will once again equalize. The Sabres are on the road for nearly the entire month of March. They will be losing at least two significant members of their “top-six” and will still be without Zemgus Girgensons for the foreseeable future (Girgensons was wearing a walking boot today).

Hockey isn’t played in snapshots and it isn’t played in two-game bubbles. This is a season filled with 82 60-minute contests that ebb and flow multiple times. Just as the Sabres won 10 of 13 in November and December, they lost 14-straight in February. Now is not the time to panic or worry about the state of the team. They’re still terrible. They’ll be even worse on Tuesday.

If there’s a time to panic over the team’s chances of finishing 30th and guaranteeing one of McDavid or Eichel, it isn’t now. If the Sabres manage to climb more than a game out of the basement, then there will be time to worry. Until that point, you have to trust the process that has kept the team mired in the league basement for nearly the whole season.