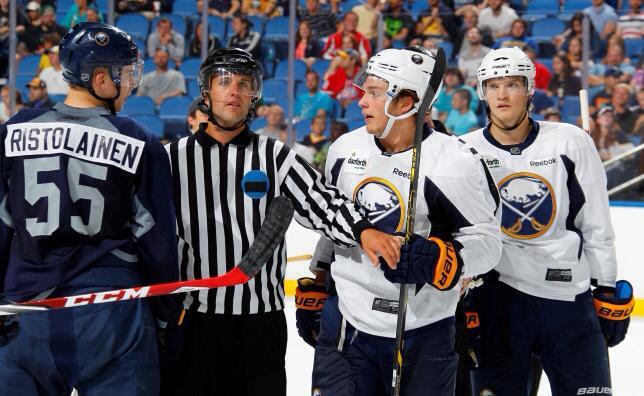 The biggest star of last night’s scrimmage didn’t even see the ice after the halfway mark of the second period. Linus Ullmark was far and away the most impressive goaltender of the four who dressed last night.

Ullmark’s size is a natural gift but it’s the way he uses it that makes the young goalie appear to be a sixth round steal. Ullmark moves fluidly in his crease and doesn’t simply hang back in his paint to try and fill the net with his big frame. He made a highlight reel stop on a back door opportunity for Colin Jacobs and had a number of other quality saves in his 30 minutes of action. He’s able to maintain control of his area and it appears that he has a very calm demeanor in doing so.

I’m very excited about Ullmark’s overall potential as he enters his final European season. He continues to show many impressive signs in his development and having the chance to defend the SHL goaltender of the year award should aid in elevating his play yet again.

It was Ullmark’s play that kept the Blue Team at bay for most of the night as it seemed as if white was outmatched at times. Shots on goal weren’t being tracked on the arena video boards but it appeared that the Blue Team carried the play for longer periods than that of their counterparts. There was one sequence early in the second period that the line of Dan Catenacci, Mikhail Grigorenko and Hudson Fasching cycled for an extended period of time and Ullmark was forced to make a number of saves in tight.

The trio centered by Grigorenko was the one line that managed to carry play in the offensive zone for more time than any other unit on either team. There were nice flashes from guys like Zemgus Girgensons, Sam Reinhart, William Carrier and others, but Grigorenko’s line stood out as the most dominant last night.

Grigorenko looked just as smooth as he always does when he’s playing with confidence and he made one very impressive individual play in the third period that saw him miss the net high on a quality scoring chance. A few people, including Chadd Cassidy, have talked about Grigorenko’s play away from the puck and he seemed to have a noticeable amount of chemistry with Fasching for most of the night. Whether it was in support on the cycle or sinking into the weeds at the circles or in the slot, Grigorenko had a very strong showing for a player who is heaped with criticism at every turn.

Fasching was equally impressive in using his frame to control the puck and create space. His best chances on the night came right on the doorstep but he also put a heavy wrist shot on goal from the right circle while on the move, so he’s not just a one-dimensional threat. His most impressive work came behind the net and in the corners as he was nearly impossible to take off the puck. While they didn’t find the back of the net it stands to argue that the trio of Catenacci, Grigorenko and Fasching would produce if more scrimmages were to take place. Perhaps Friday will see the trio creating on a regular basis.

Friday’s three-on-three tournament will mark the end of the 2014 Development Camp and I’m hoping that another day on the ice together will yield better chemistry up and down the roster for the half-ice tournament.