Because I can be a procrastinator at times and due to taking some vacation time around Christmas, I didn’t get a chance to offer up any sort of reaction to episode two of NBCSN’s Road to the Winter Classic.

My laziness was probably for the best though as episode two and three offered up improvements from episode two but maybe didn’t feature enough meat to justify a full review. So I’ll roll each of the last two episodes into a single blog post as we look ahead to Monday’s Winter Classic.

The first episode of Road to the Winter Classic really lacked the punch that the pay cable versions offered. Simply having to censor the show was going to limit some of the color the Winter Classic’s behind the scenes predecessors had; attempting to completely avoid any obscenities – which appears to be what NBCSN has chosen to do – takes away a majority of the locker room and on-ice content. Naturally, that’s typically some of the best stuff the show offers. END_OF_DOCUMENT_TOKEN_TO_BE_REPLACED

Expectations for this year’s version of Road to the Winter Classic needed to be tempered right from the get-go. The transition from Epix to NBC Sports was going to dull the product a bit as you’d expect when switching to basic cable from a premium network. 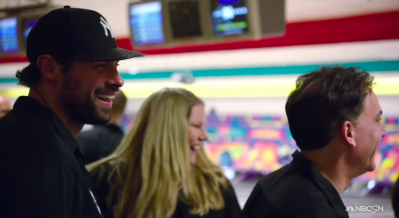 Even with the understanding that the NBCSN version of what Epix inherited from HBO is going to be diluted, the first episode failed to deliver many thought provoking insights from either the Sabres or the Rangers.

The first episode wades through the typical introductions and scene setting you’d expect. We get bite sized tidbits on Michael Grabner, Henrik Lundqvist while hearing from Alain Vigneault and Jimmy Vesey. Not Liev Schrieber then touches on Sabres veterans Ryan O’Reilly and Evander Kane before circling back with Buffalo mainstays Jason Pominville and Kyle Okposo. That’s right, second-year Sabre, Kyle Okposo is a mainstay.

Most of the Sabres off-ice action is focused on the team’s Bowl-A-Rama event where Zach Bogosian and Okposo are able to show some personality. The highlight of the segment being when Okposo has his bowling ball slip out of his hands. You can save your “he’s as bad at bowling as he is at hockey” jokes, I’m certain I’ve heard/seen them all. END_OF_DOCUMENT_TOKEN_TO_BE_REPLACED

When the puck drops on January 2 at Citizen’s Bank Park it will mark the fifth occurrence of the Winter Classic. The event has gone from a fledgling experiment to a made-for-TV goldmine that competes with other major sporting events.

The Flyers and Rangers clash will take place in the third baseball stadium and be the second-straight time that a previous participant appears in the Classic. Only one instance involved teams from the Western Conference.

The event as a single entity is beyond brilliant. Not only is it a perfect television product, it easily draws casual fans to the sport. In addition, thrusting the game back into its natural environment provides added drama; not only due to the venue but the potential monkey wrench the weather can act as. Since the league cherry picks the best possible foes on a yearly basis, there is almost no way to fail. However, there have been a few contests that fared better than others.

Considering all of the outside forces that impact this brilliant event, it is largely a roll of the dice each season. While last year’s game was the first to truly be affected by weather, the other events went off without a hitch. In addition to weather, the venue, the teams and the actual game all factor into the overall product in the end. Here is a rundown of where each Winter Classic stacks up: END_OF_DOCUMENT_TOKEN_TO_BE_REPLACED