Clearly the NHL’s big decision makers are following me on Twitter and reading this blog as they announced a brilliant and awesome change for the 2016 NHL All-Star Game this week.

At one point last winter I penned my thoughts on altering the All-Star Game to a 3-on-3 tournament format although upon review I don’t seem to have ever posted what I had written. There’s a chance that I had originally wrote it for my duties with Great Skate and then swapped it out for another piece. So unfortunately my takes on the All-Star Game didn’t grace the internet which is probably for the best.

Whether or not I had published my thoughts on the potential changes to the game, know that the decision to move to a 3-on-3 tournament format is a masterstroke for the league.

Perhaps it was simply because of my age, but I remember a time when the All-Star Game was actually fun to watch. Owen Nolan calling his shot over Dominik Hasek’s glove remains a favorite hockey memory. Now the game is stale, filled with apathetic play and bloated scores. Amazingly, all this extra scoring didn’t seem to increase the entertainment value of the game.

Adding to the novelty of the game can’t do anything but help the product. Copying the MLB and awarding home-ice advantage to the winning conference would be foolhardy and aside from simply putting a cash prize on the line (which they happen to be doing) it doesn’t seem as if there were too many logical solutions to get the players to play harder. END_OF_DOCUMENT_TOKEN_TO_BE_REPLACED

Last season the NHL took a brilliant step forward regarding the All Star game. They eliminated the East vs. West format and instituted a “fantasy draft”.

While the All Star game is pretty much a waste of time (aside from the skills competition), the draft has brought some relevance to an otherwise boring display. 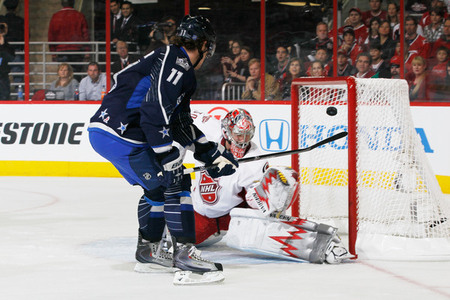 The draft is the best thing to happen to the All Star Game since ever. Letting the league’s best players basically just pull sticks to determine teams was a fantastic addition to last year’s game and shouldn’t be changed. Ever.

With the All Star rosters being announced today there was the expected uproar from fans clamoring for their team’s snubs and the inclusion of those who they deem unworthy of selection. For example, there is little reason for Thomas Vanek to have been left off this roster. Perhaps there was a wink-wink nudge-nudge agreement to leave him out in order to rest, but he has been one of the NHL’s best forwards this season. There is little reason to leave him out of this game.

The likely explanation for Vanek being snubbed can likely be found in fan voting. Because the fans are allowed to determine the six starters for the game, there is the usual run of home players who are sometimes undeserving of the selection. So, Jason Spezza, Daniel Alfredsson, Milan Michalek, Erik Karlsson, Dion Phaneuf and Tim Thomas were voted to participate. That doesn’t necessarily mean they would have been selected. Of course, Michalek, Thomas and Karlsson are worthy additions. The other three could probably have been left off for other players. Here lies the problem. END_OF_DOCUMENT_TOKEN_TO_BE_REPLACED