Quarantine life has us all a little wacky, so it felt like a good time to roll out another mailbag post. Below are questions about who I’d want to be quarantined with, GM candidates and my personal favorite, goalie equipment.

Mike/@mike_mckinnon22 – What was your favorite Ryan Miller setup? 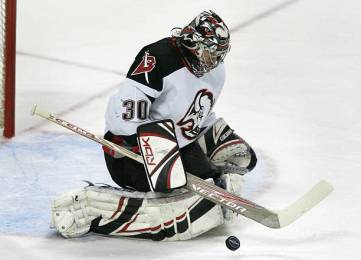 Tough call on this one. Miller wore a really unique set of pads for a number of years that you couldn’t get at retail. They were a combination of a handful of different products that included the old Koho 580s, Vaughn Vision and Heaton 10s (among others). The pads got updated with different graphics over the years so that CCM and Reebok could advertise new retail models, but the pad itself was a unicorn. They were fairly old fashioned, featuring not just knee rolls but shin rolls as well but there was a level of nostalgia that they offered.

Picking my favorite set up of Miller’s is tough since my favorite mask of his debuted in 2011-12 when he added the Buffalo script to the chin of his iconic bison head mask. He had an awesome set of Vaughn V6 pads in 2014 (when he finally abandoned the Frankenpads) and his Koho 580 set from early in his career was elite. However, my favorite is pictured here. The Vector graphic he picked up towards the end of 2005-06 looked awesome in Buffalo’s red and black and remains a cool pad graphic to this day. It wasn’t the greatest retail pad and the graphic looked better on Miller’s pads than at retail, but the arrow graphics played well in the Sabres color scheme. It also looked pretty close to the mismatched RBK Premier blocker he started to wear after breaking his thumb. So that’s my choice. END_OF_DOCUMENT_TOKEN_TO_BE_REPLACED