It’s been a while since the last mailbag ran, so I’ve taken a few extra questions for this edition to make up for lost time. This edition of the mailbag will hit on draft questions, goalie gear, movie recommendations and trade targets.

Hopefully I won’t be as lazy moving forward and there will be more mailbags to come in the weeks to follow.

Eli – @elitheproph – Is it too early to give up on Krueger

My short answer is no. If a coach isn’t getting it done, cut the cord. Back in April, I ran a post about how standards vary for different organizations and how some hold themselves to a standard of excellence which makes no excuses if they choose to fire a coach quickly. By comparisons, it often seems like the Sabres err on the side of caution when considering the firing of a coach or GM.

That isn’t to say knee-jerk firings are the best solution and I typically favor a more pragmatic approach. But it seems more and more that coaches in the NHL are expendable when it comes to finding both short and long-term success. Just look at what the Islanders have done since hiring Barry Trotz. He may employ a boring system but he gets results. Given the gift of hindsight, would you have any qualms with the Sabres canning Phil Housley the minute Trotz became a free agent in the summer of 2018?

Krueger’s influence on the room shouldn’t be ignored but overvaluing culture over results has been an issue for the Sabres for the entire length of their playoff drought. Compliments for the coaching staff have been few and far between in recent years, so I put some stock in his ability to lead his players. But there are still some very visible warts with his coaching style and I wonder how much talent the Sabres need to accumulate in order to overcome it.

Hoarder of Legos – @mtdoak – What are the plans for replacing Pilut.

I think Jacob Bryson and Oskari Laaksonen are the two prime players to fill the void left by Pilut. Bryson in particular. Both are quality skaters who get favorable reviews for their puck moving capabilities. Bryson gets plaudits for being a good defender despite being undersized and seems to be the guy who will be most capable of filling NHL minutes on the left side. He may even get a look this year depending on how the roster shakes out.

Laaksonen isn’t as close to getting an NHL look as Bryson but he has some offense to his game which could be an x-factor in his development. It’s hard to say whether or not his offensive ceiling is high enough to see NHL power play time but it’s a key trait in his game. There’s a little similarity in his offense to what Pilut was doing for HV71 before being signed.

1) Does Blashill make it through the season?

2) Who do you want the Sabres to draft? Who should the Wings draft?

3) Who do you think will be the Wings starting goalie next season?

I don’t like Blashill sees another offseason with the wings. Rebuilding teams that strip it down (see also, tanking) always have a few sacrificial lambs. Jimmy Howard appears to have been one and assuming this is another tough season, Blashill would be another. If they finish in the lottery again – and I’d argue that should be their aim – then firing Blashill is a logical step in showing they have aims on improving as they wait for their picks to mature.

On the goalie front, the Makrstrom smoke makes sense. I think that’s probably real. I also don’t think it’s a great idea to sign a 30-year old goalie to a five or six-year contract. So as a fan of a division rival, the Wings should totally do that. Two other goalies I wouldn’t be surprised to see in Detroit are Matt Murray and Braden Holtby.

As for the draft, I want the Sabres to draft Quinton Byfield but I know that’s not possible. My three favorite prospects given where the Sabres are picking are Marco Rossi, Anton Lundell and Seth Jarvis. If they land one of them, I’ll be ecstatic. Almost as ecstatic as I was last year when the Wings took Moritz Seider and pushed Dylan Cozens to Buffalo. If the Sabres are to land Rossi, they’ll need the Wings to play a similar role as they did last year. I think the rumors that they covet Cole Perfetti are legitimate and should they pick him, it would be a huge boost to getting Rossi down to eighth overall. If I were Steve Yzerman, I’d pick either Rossi or Lucas Raymond. They’re both incredible talents who ooze offensive skill and they’d both be excellent additions for the Wings.

John – @kozyshank – With the upcoming absence of NHL hockey – give me 3 movies I need to see.

Without knowing the catalog of movies you’ve seen I hope my recommendations aren’t flicks you’ve seen in the past. With that in mind I’ll give you a couple extras just in case.

Rob Gregoretti – @ rob_gregoretti – Who are the most realistic players Adams can get? How active will he be?

@brandonle9992 – What trade moves do you see that may give the team a bit more cap flexibility?

Going to tackle all three of these queries with a single answer since they all cover trade targets. If the Sabres are really serious about getting to a $70M internal cap (I don’t think they are) they’ll need a lot more trades like the deal they made for Eric Staal; taking on less salary than they send out and picking up contracts which are paying out less salary than the AAV. It’s easier said than done and I’m guessing their team cap falls in the $75-77M range.

Given their makeup, the Sabres absolutely need to find a right winger and probably another center. They could stand to unload a right-handed defenseman and it sounds like they’re going to sniff around the goalie market.

It might be easier to list teams for the Sabres to target less so than individual players. For example, Vegas will need to shuffle salary around as they try and make room for Robin Lehner and the other free agents they plan on retaining. Does that mean you could get someone like Paul Stastny (Alex Tuch even?) at a discounted rate for taking Marc-Andre Fleury off their hands? Could the Coyotes be backed into a corner and unload Christian Dvorak for the right price? What about Derek Stepan? He fits the Staal mold of a one-year contract paying less than the AAV. Alex Kerfoot and Andreas Johnsson are both expected to be shopped by the Maple Leafs and Max Domi’s name is out there as well. Chad from Expected Buffalo has reported Brandon Saad as a potential target and while he isn’t as sexy as he was three or four years ago, he’d improve Buffalo’s middle six.

Josh Anderson has been a favorite on Twitter and seems to be available for the right price. I worry how his injury will affect him down the road and what price the Blue Jackets will be asking for him. Bryan Rust is another name that’s been out there and would be a great addition to the middle of Buffalo’s lineup. But like Anderson, I worry the cost would be prohibitive for the Sabres.

There are a lot of good options out there for the Sabres. I’ve been hung up on the Coytoes as of late. We joke about the Pegulas trying to make the business operate on a leaner budget but Arizona’s financials look to be far more serious. I think there’s something to be leveraged there and maybe even something that could seriously benefit the Sabres in the long run. Christian Dvorak is probably the high water mark in terms of guys I’d be aiming for there.

Tough one. If we can agree that 50 points equals a strong offensive season for an NHL forward, we can find some realistic expectations for this trio. 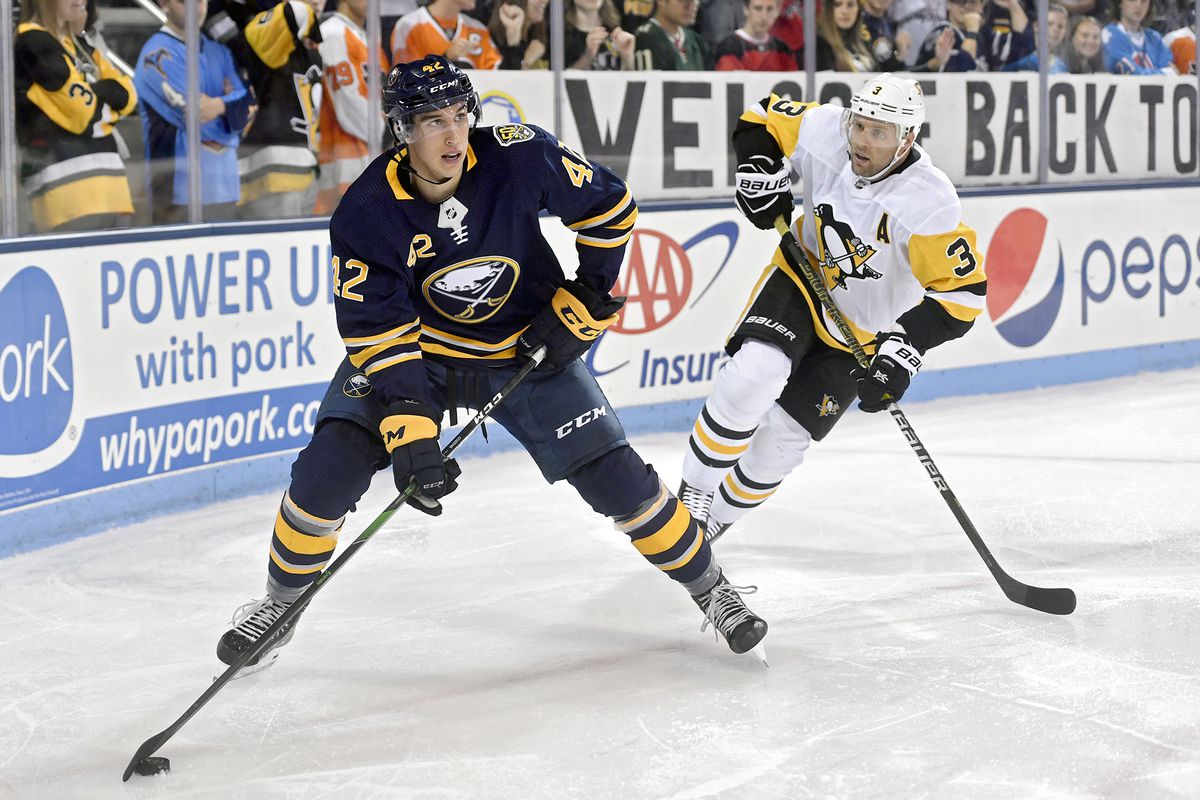 Hitting 50 for any of them would be a huge win, but rolling that total back by 5, 10 or 15 points probably paints a good picture for each depending on roles and deployment. It’s hard to determine where each slots in at this very moment, but let’s assume Cozens plays the year with Staal and Skinner while Thompson and Mittelstadt are deployed in some sort of third line roles.

A 15-goal, 25-assist season would be a great jumping off point for Cozens and would probably be attainable if he played 82 games with Staal and Skinner. Peel back a few goals and assists from that total and hope he hits a target between 10-15 goals and 35-45 points and I think you’re in business.

It’s a little tougher to peg Thompson and Mittelstadt because I can’t imagine they play together on some sort of a third line but at least in a vacuum, I think a 35-point ceiling for each is a good starting point. Mittlestadt hit 25 points as a rookie and assuming he takes a step forward in an 82-game season, 35-40 points seems doable. Similarly for Thompson, if he lands somewher between 10-15 goals and in the 25-35 point neighborhood I think you’ll be fairly happy with the results.

The difficulty here isn’t so much guessing at the point totals but separating what I feel would be realistic from what sort of production would really move the needle for the Sabres. For example, counting on 30 points from Tage Thompson seems safe and pretty fair. But if he posts 22 goals and like 48 points, we’re probably talking about the Sabres taking a pretty significant step forward form a team perspective.

Daniel – @danieljlayman – 1. Is the entire Sabres coaching staff returning?  I haven’t seen any news one way or the other.

2. If there are vacancies or areas of improvement, what would it be and who would be a name to keep an eye on?

I think yes. Maybe this is wishful thinking, but we’ve seen some reports that they’ve sniffed around Brandon Saad and there were rumors they were in on Josh Anderson at the deadline. There were two different GMs executing that work, but that’s one of the more obvious weak points and they have assets that can help them fill that hole. Whether that’s Brandon Montour, a draft pick or some package of players, picks and prospects.

Ian @bees_33 Would you trade for MAF? Not for his skills but simply for equipment design?

Also how much money would you cap signing Larsson at for a reliable 3C?

I’ve never been a fan of Fleury’s. I don’t love his game and I don’t think his taste in gear is all that impressive. I really don’t like his mask artist. From a style perspective, I certainly wouldn’t be fawning over him. That being said, if taking on his salary helped you pry a more attractive asset out of Vegas, I could very easily take that medicine.

Replacing Larsson won’t be an easy feat. He’s shown that he’s capable of shouldering massive defensive deployment and handling it well. The financials are a factor here and finding a solution that slots in under $2M not only gives flexibility for acquisitions higher in the lineup but helps the Sabres budgetary considerations.

I’m planning a post on this subject but the three guys I’d look at closest are as follows: