Buffalo’s most recent attempt to string together back-to-back wins fell short with a home loss to Toronto on Wednesday night. The Sabres allowed three-straight to the Leafs after taking a first period lead and the first two goals were both messy in their own regard.

John Tavares’ tap-in was the product of an effective cycle driven by William Nylander and Buffalo’s continued struggles picking up coverage in the defensive zone. Far too often this season, the Sabres have gotten loose in their coverage, leading to uncontested shots and tap-ins for their opponents. Their coverage has been so poor at times that opponents managed to not only find a free lane to the net but have teammates sitting open on the back door as well. It’s a problem that’s plagued the Sabres all season and I’m not quite sure if they’ll ever solve the problem unless the coaching staff makes some fundamental changes to their system.

Like with most plays, everything is harmless enough as Nylander picks up the puck behind the net. Sam Reinhart is low in the zone filling the typical center duties, Jack Eichel and Jeff Skinner are higher, covering the points, and Rasmus Ristolainen and Marco Scandella each have a man.

It’s once Nylander gets to the hashmarks that things get messy. Not unlike the Jets game when Eichel and Okposo continued their coverage, Eichel and Reinhart stay with their man here. Nylander skates Eichel and Reinhart into a rub as he switches with Reilly and the two Sabres maintain their coverage on each guy. But the gap that formed between Reinhart and Nylander is ultimately what bites them as that, combined with the pick created by Eichel, gives him the space to get free. 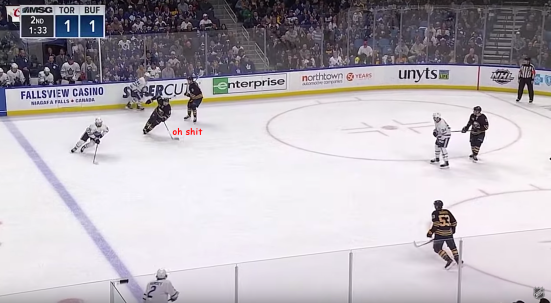 Reinhart is pretty much cooked once Nylander turns the corner. Unless Skinner abandons his man, Nylander won’t be challenged prior to shooting.

One interesting facet of this play is Eichel’s decision to slide towards the net in support. At one point he turns and takes a few hard strides towards the crease. Had he just stayed beside Reilly the shot that eventually caroms off the post and then his shin pads would’ve likely wound up in the corner. This is a good reminder to you kids out there, don’t try too hard or it will just bite you in the ass. 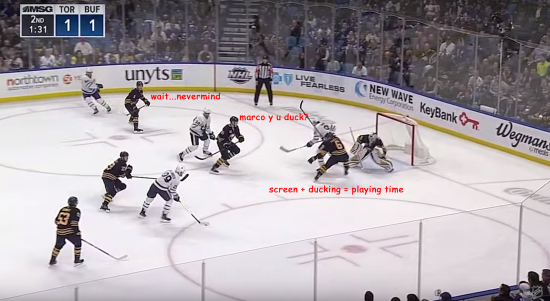 By the time he gets to the dot, Nylander is already in a perfect spot to shoot and pretty much all is lost. Tavares has kept Scandella occupied on Carter Hutton’s lap, making for a pretty heavy screen for Nylander to shoot through. Of course, Scandella also opts to duck as Nylander’s shot is coming through, a strange decision that takes him entirely out of the play. 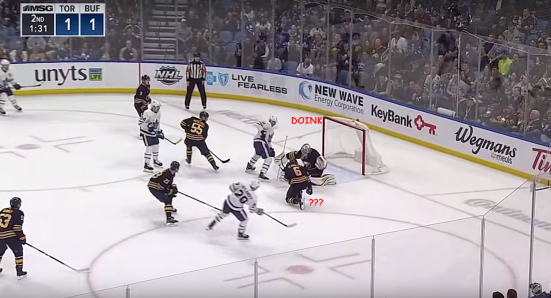 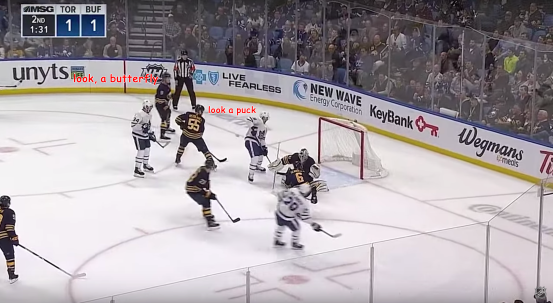 If this wasn’t already a perfect encapsulation of the Sabres season, the puck bounces down off the post and then horizontally off the ice before striking Jack Eichel’s shin pad – who was apparently distracted by a peanut vendor or something – before landing on John Tavares’ lap.

You could set the final four or five seconds of the sequence to Yakety Sax and it wouldn’t be out of place. You have Eichel looking in the stands (maybe?), Ristolainen looking at the puck but covering no one, Scandella ducking in front of his goaltender and Carter Hutton trying to figure out which way the shot went. I’m not sure if Buffalo’s issues in the defensive zone are a result of an ineffective system, poor coaching, poor execution or some combination of all three. But if Phil Housley is coming back next season, finding a more effective coverage in the defensive zone better be on the top of his to-do list.