The search for secondary scoring has been arduous for the Sabres. While there have been glimpses of effective goal support from players not named Eichel or Skinner, it’s hardly come on a consistent basis.

Splitting up the Skinner-Eichel-Reinhart line had been floated for some time given the incredible lack of scoring from any other portion of the lineup. Heading into Friday in Carolina, it looks like Phil Housley will separate the trio in an attempt to get a few more lines going against the Canes.

They might be catching Carolina at the wrong time says the guys at Mytopsportsbooks.com. The ‘Canes have won five straight heading into their tilt with Tampa Bay on Thursday night and have scored at least four goals in four straight games. Even with Jack Eichel set to come back, facing a team that’s been filling the net doesn’t make for an ideal matchup for a team whose secondary scoring has come and gone. The one silver lining is Carolina’s goaltending has been about as streaky as Buffalo’s secondary scoring, which could favor Buffalo’s chances to string together back-to-back wins since December 11 and 13. 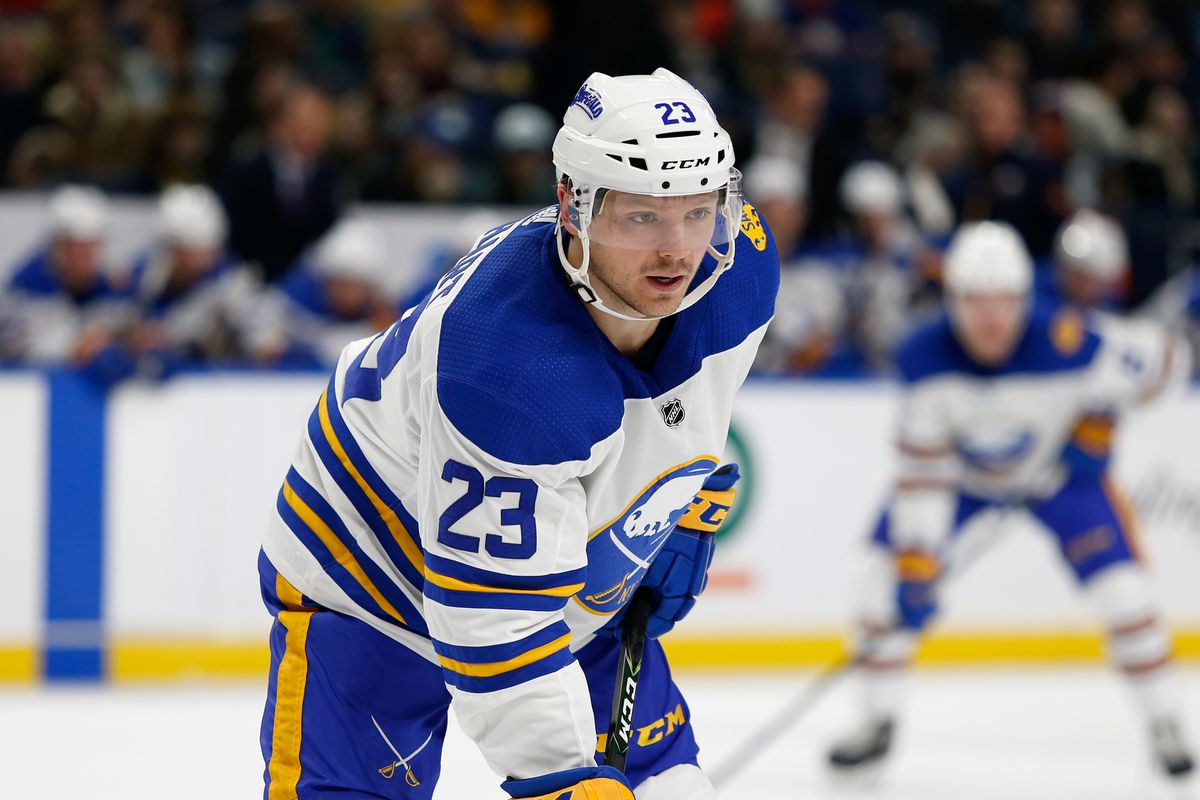 As good as Eichel and Skinner have been together, Reinhart is really the x-factor in Housley’s most recent line shuffle. Reinhart may never be an electric, highlight-reel player and his production will almost certainly decrease away from Skinner and Eichel. However he has the capability of driving offense on another line, which is precisely what the Sabres have been lacking going back to the end of their winning streak.

Of course, plopping Reinhart on the wing with Vladimir Sobotka isn’t what anyone had in mind. Though it’s promising that he and Sheary will combine well enough to make the line viable. It seems that the general consensus is that giving Casey Mittelstadt a look with Sheary and Reinhart would’ve been preferable. You can count me in that group as well.

Mittelstadt’s production hasn’t come along as quickly as anyone hoped and Housley and the Sabres seem committed to taking things as slowly as possible with him. Not unlike their approach with Thompson. But this has taken on a bit of a chicken or the egg scenario as Mittelstadt isn’t producing at a consistent basis which is leading to a drop in ice time which simply leads to less production. Buffalo’s spot in the playoff race makes it difficult to throw Mittlestadt in the deep end and wait for him to swim, but playing him nine minutes a night alongside Zemgus Girgensons and Jason Pominville doesn’t seem like a viable solution. Something that came up on this week’s podcast was the fact that the Sabres only have so many options for shuffling players in and out of their lineup. Frankly, I think CJ Smith should’ve gotten some more time (it looks like he’ll be in the press box on Friday), but short of scratching the teacher’s pet Sobotka or respected vets Okposo and Pominville, there are only so many options available to Housley. Regardless of that, I’d still prefer to see Smith get more run in the lineup. For a team starving for goals, he’s shown a nose for the puck and a willingness to get shots on goal. And he’s sporting the highest Corsi percentage on the team at 54% (sample size!).

Most of the preferred line combos any of us who scream into the void on Twitter want to see would involve some combination of demoting Remi Elie, scratching Vladimir Sobotka and using a non-existent compliance buyout on Kyle Okposo. Hopefully Casey Mittelstadt continues to earn enough trust to move back up the lineup, gaining more ice time alongside linemates capable of filling the net. Or that Jason Botterill pulls the trigger on a trade for another center. Either or.

The good news is that Housley finally pulled the trigger on splitting up Skinner-Eichel-Reinhart in hopes of finding success further down the lineup. My hope is that he stays the course with them long enough to know if they work. Few things have worked for the Sabres in the wake of that 10-game winning streak and it will be frustrating if Housley retreats back to the former Eichel group if things get rocky in Raleigh Friday night.

I haven’t been as worried about the Sabres as others have been as they’ve slid from a solid playoff spot to scoreboard watching for the wild card. The warts on this team were visible before the winning streak, during the winning streak and now after the streak. The holes in the roster are evident but they’re also relatively easy to remedy. As a side note, I say relatively easy because there are only so many centers readily available via trade in the NHL today. I’m not a fan of consistent line shuffling but I’m encouraged by Housley’s decision to finally make this move with his forwards. It’s a move that obviously needed to be made and maybe you don’t think Housley deserves credit for making the obvious move, but it’s not easy moving away from a sure thing like Skinner-Eichel-Reinhart was. It’s not quite as aggressive as I’d prefer him to be – keeping Smith in, moving Mittelstadt up and giving Sobotka and/or Pominville some time off would be high on my wish list – but it’s a move with an eye on recapturing some consistency.

We’ll see if he manages to catch lightning in a bottle and Friday’s game against the Canes is a perfect time to start. Taking two points from a team on the fringe of the playoff race would make for a great way to christen the new groupings.