You’d think the regular season might have taught us something about the Vegas Golden Knights. Thought of as a ragtag bunch of cast-offs which could have been a far more talented team given the players selected in the expansion draft, the Golden Knights promptly defied all odds and even looked like a President’s Trophy candidate for long stretches. 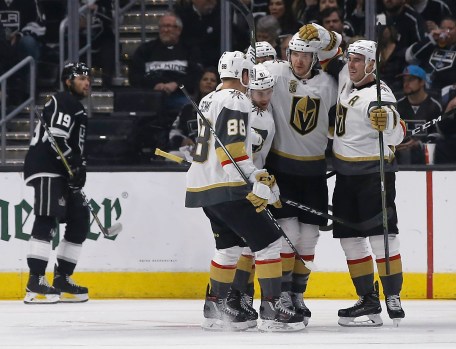 They were driven by a number of career-high performances, including a few staggeringly good shooting percentages, that were still widely believed to peter out at some point. So even with all the head turning performances from the regular season, it was still easy to bet against Vegas as they entered the playoffs.

Questions about their game translating to the postseason, how would they handle a traditionally excellent possession team in their first foray into the playoffs, could the astonishing offensive numbers by their team leaders carry forward? There were a lot of doubters that the Golden Knights could even get out of the first round. All they did was sweep the Kings, shutting them out twice and nearly silencing their offense altogether.

Call it a lesson learned for exactly how crazy good/lucky/unprecedented this Golden Knights team is. I don’t think I’d make them my new Cup pick – I still like the Jets and the Preds out of the west – but I’m not touching a negative prediction about them again.

We’re still quite early into the 2018 Stanley Cup Playoffs but there are quite a few series on the brink already. We could be looking at seven 4-0 or 4-1 conclusions with only the Capitals and Blue Jackets as the outliers. All told, seeing the Penguins, Lightning, Predators and Jets make quick work of their opponents isn’t all that surprising. Each team was an easy favorite in their series and to see a quartet of 4-1 decisions come from that group wasn’t a stretch. The Predators and Lightning are still the betting favorites to win the Stanley Cup, and their talent alone shouldn’t make their results all that surprising.

But even as one of the betting favorites for the Stanley Cup, the Predators will be facing the Wild in the second round, a matchup which could easily see last year’s runner up sent home. A tough road for the Preds (and the Jets for that matter) certainly helps the Golden Knights and their previously unlikely run. The Sharks aren’t going to be an easy out by any means, but it isn’t hard to say that Vegas is looking at the easiest path to the Finals.

The East still has a bit to bear out. Despite a 3-1 lead, the Bruins are hardly out of the woods with a fast, pesky Leafs team and the Capitals-Blue Jackets series may very well go the distance. Even the Devils have been rejuvenated since replacing Keith Kinkaid with Cory Schneider. But the other side of this is that none of the teams really feel like world beaters. Boston’s health may play a factor in this but I don’t feel that the Bruins are a good matchup for Tampa Bay, for example.

Does this mean I think the Golden Knights are going to sleep walk to the Cup? Hardly. But for a team who I felt might finally come back to earth in the postseason, things don’t look nearly as daunting for them as they did just two weeks ago.