The Blues and the Cardinals haven’t been shy about collaborating on a host of different projects over the last few years. Their partnership has been particularly strong since the departure of the Rams and one of the coolest things they’ve collaborated on are crossover jerseys.

Lately both teams have adorned their neighbor’s logo for a day each year and the Cards will be offering up a promotional version for 2018, with a cool away uniform design. It’s a cool giveaway which would probably even garner attention as a retail item. 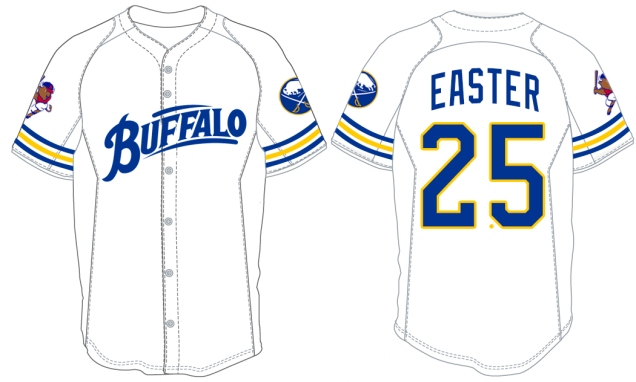 So far, Pegula Sports hasn’t explored too many crossover retail or promotional items since taking over the Bills, Sabres and Bandits. Aside from the various One Buffalo logo shirts, there hasn’t been too much done to explore crossover items like the Blues and Cardinals have created. At least nothing that’s been worth buying.

Cross over merch or giveaways between PSE’s properties could be pretty cool, especially with unique canvases like football helmets and hockey jerseys to utilize. What might be the coolest, however, would be to take a page out of the Cardinals and Blues book and find a marriage between the Sabres and Bisons.

Two factors make a Sabres and Bisons crossover especially attractive. The first being the format of each team’s uniforms are similar with a primary crest on the front with the name and number on the back. Second, the precedent set in St. Louis and other areas makes for an easy template to follow. I’d even add a third reason based on both teams having cool marks which would translate really well to the jerseys in their respective sports.

I’ve shared my Bisons hockey jersey design on Twitter a few times and I recently floated a couple of examples of what a Sabres baseball jersey might look like. In an effort to put both designs in the same space and maybe catch the attention of the right people at PSE and the Bisons, they both now live on this post.

In a perfect world we’d see each team sport the look during warmups around opening day for the opposite club. MiLB opening day falls on April 5 this year and the Sabres play at home on the fourth. Unfortunately the Bisons’ regular season schedule doesn’t carry into October, so returning the favor would be difficult. If the Sabres ever felt like playing some games in May and June the problem would be solved in a hurry. But for some reason that doesn’t seem to be in their plans. 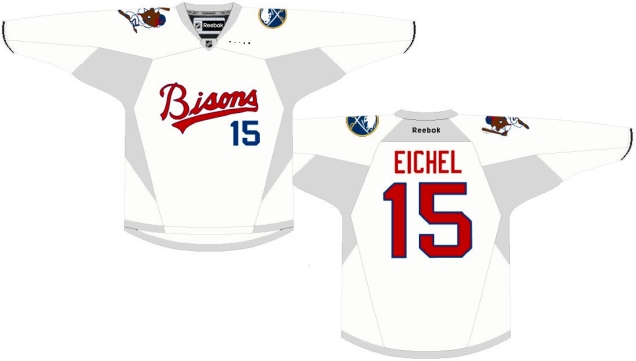 Still, setting up a pair of complimentary home dates where the two teams wore the special edition jersey would be fun. Both versions could be put on sale in the team store and I almost guarantee they’d sell like hot cakes. Blank or lettered, they’d almost certainly be winners and would give Buffalo’s fans a unique item to wear throughout the season of both the Sabres and Bisons.