Rosters for the 2017 NHL All Star game were announced with far less fanfare than the 2016 version as John Scott’s name was nowhere to be found on the four division squads for the event. While the new three-on-three format injected some much needed life into the weekend, the highlight for many remains the Skills Competition.

The Skills Competition is a perfect made-for-TV event that showcases the incredible skill of NHL players in easily digestible bites. It’s a format that’s been pulled to local events by many NHL clubs on an annual basis, as teams take advantage of longer breaks in the schedule to put on a show for their fans. The Sabres even ran their own in the 90s before putting an end to the practice.

Bringing back the Sabres Skills Competition has been a common request (at least in my personal Sabres Twitter echo chamber) and those cries seemed to intensify last year with the debut of Sabres Showdown. Giving fans the chance to see a Sabres-specific skills competition on TV gave them a glimpse of what could be in store with a ticketed event.

Adding an event like this to the Sabres schedule would accomplish a number of easily attainable goals. It’s an event that can be sold as an open ticket instead of first accommodating season ticket holders, thus extending an opportunity for those fans who don’t typically attend a game to grab a seat at Key Bank Center for Sabres hockey. The tickets themselves would (read: should) be below that of the box office price for a game, again helping to include a segment of the fanbase that typically can’t attend a game in person. These are also best served as early afternoon events, which is tailor-made for #familyfriendly #fun. Lastly, a special event like this could be considered a way that the team is giving back to the fans, another issue that has gained momentum in recent years.

That last point is certainly a contentious one as there are plenty of fans who feel sports teams don’t owe them a thing. It appears as if these are the people the Sabres listen to on a regular basis as they’re woefully behind a majority of the league when it comes to promotions, giveaways and most other avenues for giving back to the fanbase. Putting on a skills competition would go a long way in bridging the gap with the many fans who do feel the team should do more (or anything in this case).

It should be an easy enough event to pull off. Obviously there are hurdles unknown to the layperson when it comes to scheduling and staffing the arena while also staying within the bounds of the CBA. However, on the surface, it should be easy enough to find a Saturday or non-Bills Sunday where the arena is available.

Assuming the scheduling portion takes care of itself, the event itself has room to be quite cool beyond the already typically impressive structure a skills competition already offers. What I’d like to see the Sabres do is add some unique beats to their version.

The competition itself would utilize the same events you see during All Star Weekend, although I’d lobby to bring back a couple previously retired events to give fans a little something different to take in. Fastest Skater, Accuracy Shooting, Hardest Shot and Skills Challenge Relay would all be included along with In The Zone (seen here in 2004) and a combination of the Breakaway Relay and Elimination Shootout.

I’d do away with the Dunk Competition breakaway contest as I don’t think it plays that well at the league-wide event, let alone a team-specific one. But by combining player eliminations into the relay could add some excitement to that portion of the event. Besides, there’s no rule that says the players can’t get creative with their attempts. It’s not like Robin Lehner would stop them anyway.

One cool addition would be including some of the team’s prospects from Rochester in the fun. Linus Ullmark and Jason Kasdorf would each lend some relief to Lehner and Anders Nilsson in the various events and bringing Alex Nylander, Nick Baptiste, Evan Rodrigues and Hudson Fasching up wouldn’t just give fans a peek at the organization’s prospects, but would add a few more bodies to each team for the higher skill events. After all, you’d probably rather see Nylander do accuracy shooting instead of Justin Falk.

I can’t help but think the players would enjoy the chance to participate in this as well. They’d probably get out of a day of practice and they’d have the chance to relax and simply enjoy the experience in front of the fans away from the pressure of a game. The Skills Competition participants at the All-Star Game are always having a good time while they watch the various contests, giving the Sabres players a chance to enjoy a similar laid back event would almost certainly appeal to most of them.

There’s one other wrinkle I’d add to this Sabres Skills Competition and it’s out of the St. Louis Blues playbook. As part of their Winter Classic celebration, the Blues hosted the One Nation Classic the weekend after they dispatched the Blackhawks. They put on a skills competition as part of the event and they also wore one-of-a-kind prototype jerseys that were designed for the franchise’s inception. If you follow this blog at all you’ll know what’s coming next. I would have each team wear throwback jerseys; one in the original white and royal blue home jerseys and another in the red and black uniforms from the 90s.

Since the team will be split into two squads as part of the competition, why not take advantage and sport unique jerseys for the event. If having one team in blue and gold and one team in red and black would be too visually jarring, rotate through the throwbacks each year. One year wear the original royal and gold, red and black for the next year and then dig deeper. Honor the Bisons and Norsemen in subsequent years. I’d spend all of the money if they trotted out Buffalo Stampede (1994 RHI World Champs) jerseys as well.

Since there seems to be no sign that the Sabres would wear one-off or special edition jerseys for a game – next year’s jersey overhaul prevents this for at least 2017-18 anyway – this at least provides an opportunity to do something cool and along those lines. More importantly, this adds an additional wrinkle of honoring Buffalo hockey history. 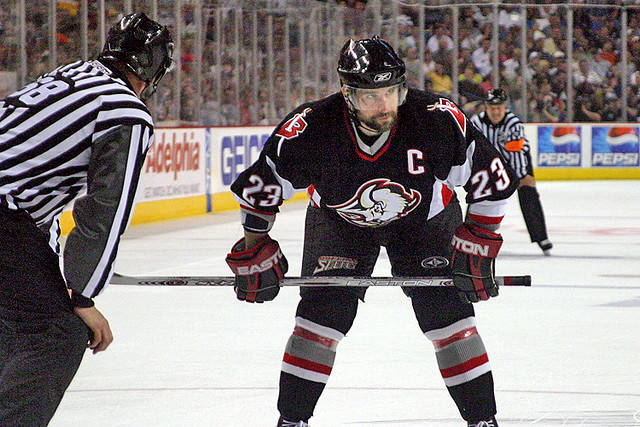 Adding special jerseys also happens to create an excellent opportunity to sell more merchandise (a common refrain in the 2ITB jersey anthem). Not only is this another date which puts butts in Key Bank Center seats, but selling limited merchandise specific to the event – especially with the added benefit of using different logos – adds to the financial benefit for the organization. I mean, they could sell Jack Eichel bottlecap logo shirseys and never have enough in stock, so why not use this treat to the fans as a way to line your pockets a bit more?

Further, this would be a piece of cake to sell to a sponsor, meaning you could slap an event logo patch with the sponsor’s name on the jerseys, thus bringing in even more money as part of the event.

It seems that there are a lot of these ideas that get cooked up by the minds of Sabres Twitter but the Sabres don’t seem too jazzed about getting their hands dirty with them. Perhaps it’s a product of the organization biding their time until the team is really competitive, but the cries for a better return on investment are growing. Look no further than Vogl’s article linked above. Fans in general, let along season ticket holders are clamoring for more respect (for lack of a better term) and it would appear we’ll still be waiting.

Things took a step forward with Sabres Showdown last year. Hopefully we have the chance to see a skills competition in person within the next 12 months or so. It would certainly sit well with the fans.

One thought on “Pipe Dream: It’s Time for a Sabres Skills Competition”