The World Cup of Hockey is right around the corner, finally bringing the international event back to the hockey world after a 12-year absence. In the time between the 2004 event and this year’s World Cup, some major changes have come to the world of goaltending. It’s far easier for goalies to get new customized equipment and turnaround time on new masks is quite short.

As we approach the start of the tournament, every country’s goaltender has had their new gear or helmets released to the public via Twitter, Facebook or otherwise. Let’s take a look at the best and the worst of the World Cup of hockey goal masks (and gear).

My favorite feature of Gunnarsson’s work is his ability to add depth and texture to basic designs. Hotlby’s Team Canada mask is a perfect example of this as there are all sorts of minute details on the maple leaf on both the chin and forehead. The sketchbook looks on either side of the helmet keeps the white sections very clean but still adds detail and overall the mask is very attractive thanks to the bold, clean design. What puts Holtby on top is his Tragically Hip tribute mask which is absolutely killer. Gunnarsson’s portrait ability makes the images of Gord and the band look terrific and the rest of the mask still pops.

Bishop’s mask is a take on the glow-in-the-dark TRON mask Dave Gunnarsson wowed fans with going back to the 2014-15 season. I’m a big fan of the mask he wears for the Lightning and the USA shield really pops with the neon lines. It’s a sharp mask with clean, bold lines which will make it look great up close and from distance.

Hopefully Murray is the starter for the U23 squad as his mask is far and away the best of the three on the team. There are features that carry over from his Pittsburgh masks with the necessary updates made for the U23 uniforms. The small details around the main logo really stand out to me and I think my favorite feature is how Griff went with a true black base that allows the orange logos and trim to really pop off the mask.

Markstrom’s Sweden mask comes with a heavy dose of Zlatan. The hard contrast between the blue and gold panels works thanks to the portraits of Ibra along with the oversized Tre Kronor on the forehead. Bonus points for Zlatan, of course, but it’s a very good-looking mask.

Koskinen’s mask rates well for me mainly for the basic but attractive lower portion that features the Finnish flag. Gunnarsson did a tremendous job keeping a very simple design that still looks very attractive. I don’t love the way the lion on the top of the helmet is rotated to almost look upside down from certain angles, but the entire package is really very attractive.

Full disclosure, Scheinder rates this close to the top-five due to the killer American flag pads he’ll be sporting at the tournament. Schneider’s World Cup pads are phenomenal and while I’m not in love with the paint job on his mask, it still looks very good. The use of bold lines and the oversized USA shields make for very attractive features.

There’s nothing really phenomenal about either of Lundqvist’s World Cup Masks. The lightning bolts – something that also features on Carey Price’s masks – don’t really do it for me but the forehead pattern that looks almost like dragonscale is a winner. I’ve never been much of a fan of the glitter paint Lundqvist has sported on his mask the last few years but overall the designs look cool. I favor the all-blue version slightly more than the blue and silver mask.

Price, like Lundqvist, will bring two masks with him to Toronto for the World Cup. Of the two I think the red and white version is worlds better than the black and grey version despite both paint jobs being nearly identical in terms of substance. The white maple leaf stands out much better than the black version as the red base really provides a very nice contrast. A bit more red on the alternate mask probably would have given it a bit more character as I feel that it looks like a boring, generic EA Sports mask in its final form.

Mrazek’s mask is among the busiest at the entire tournament and it’s also one of the most creative. The King Kong take featuring Peter Griffin in a monkey suit is clever and the different country’s logos on the fighter planes is a very cool detail to add. The opposite side of the mask is far more basic and ought to play well with the red, white and blue pads he’ll be wearing for the tournament.

Greiss is another entry boosted by the look of the gear he’ll be wearing. His mask is a very cool take on Team Europe’s composition, using puzzle pieces to bring the different countries together. It’s also representative of autism awareness, a terrific cause which Griess will be bringing more attention to thanks to the platform of the World Cup. In addition to his very clever mask, Griess will be going old school with a set of vintage-look Vaughn pads and gloves. I’m not sure how these will look with Europe’s weird jerseys but the vintage leather look with the colors German flag on the blocker board and the Vaughn lettering is a big win for Griess.

Really basic paint jobs either score a perfect 10 or fall flat (see Pavelec, Ondrej later on). Varlamov’s matte-look is really sharp and really looks attractive. I’m particularly fond of the blue frame for the mask’s window. That feature really helps the design pop. It’s certainly eclipsed by some of the more creative masks on the list, but overall it’s a very unique and attractive look.

Bob’s Team Russia mask is much more detailed than Varlamov’s but the brick wall motif doesn’t play too well with the red white and blue of the Russian flag. I love how Gunnarsson worked in the coat of arms and the way he frames the cage with the blue portion of the mask. The font and banner for Bob’s nickname is terrific as well. I could have just gone for a little less brick.

Neuvirth’s mask shares a few of the traits which ranked Ondrej Pavelec’s mask down near the bottom of my list. However, Neuvirth and Gunnarsson teamed up to build in a few additional features to keep the mask from being really plain and low-key. I like the integration of the flyers logo – one of the few NHL logo integrations I really like for goalies at the tourney – and the checkered bottom portion adds plenty of pop.

Rinne’s masked monster look has started to wear thin on me. He’s had some very cool takes on the look including the Predator and Gladiator. This new version, while an interesting take on the Finnish coat of arms, just doesn’t really get it done for me. As the kids on the internet say, it’s fine.

Like Rinne’s design, Rask’s is getting a little tired for me. It’s terrific artwork and incredibly bold. However, it’s not overly unique in any way compared to some of the others in the tourney. For example, comparing to the Price or Holtby Team Canada masks there isn’t nearly as much of a unique look for the tournament.

I’m a big fan of the pixelated, Nintendo masks Gunnarsson has done for Gibson over the past year. However, I think this Pac-Man version is just a little too busy for my taste. The Ducks logos are a little too big and the North America logo is a little too understated. The way the U23 team logo was deployed could have been very cool, but it winds up being overwhelmed by all of the other features. However, the black base gives it the edge over his teammate Hellebuyck. 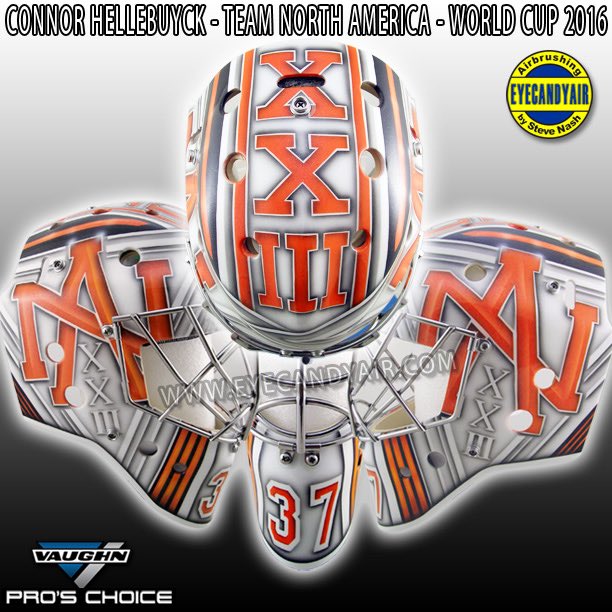 I’m not a huge fan of the overall look for Hellebuyck’s mask. The enormous XXIII on the forehead isn’t my cup of tea and there are a lot of random lines and shapes tossed in that make this a very busy look. I’m also a big fan of the darker base given the North American color scheme, so this one was fighting an uphill battle from the start.

Halak’s mask is a decent combination of the artwork he sports with the Islanders and Team Europe images. I’m not a huge fan of the take on the brick wall although I do love the map of Europe with pin points where the team’s players hail from. It’s a solid mask that’s just lacking in a few areas that would push it up this list. Halak will be sporting some of the best pads in the entire tournament, however.

When Gunnarsson was teasing a Lego Batman sporting a Danish flag, I was pretty pumped for Andersen’s mask. However, the overall look is a little underwhelming. The large Maple Leaf really takes away from what could have been a cool European-focused look. I understand that he now plays for Toronto and the event is being played at ACC but the European logos are underplayed which takes away from the look, especially compared to how other goalies masks look for the tourney.

*Andersen’s injury will keep him from the tournament but his spot in the rankings will remain as, unlike Robin Lehner, his mask was completed prior to being replaced.

While I really liked the way Semyon Varlamov’s mask turned out, I can’t say the same for the basic look Pavelec is going with for the tournament. I can’t quite put my finger on it, but the final product reminds me of many of the masks Jonas Hiller had worn in Anaheim which rank among my least favorite masks ever. The stripes on the forehead seem misplaced and the lack of additional detail leaves the mask empty. By comparison, Pavelec has sported some phenomenal Olympic masks in 2010 and 2014. 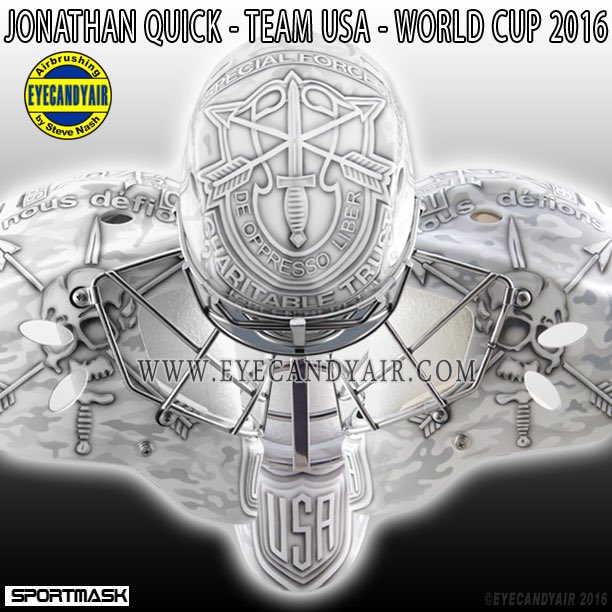 I really like the concept of Quick’s white mask honoring American Special Forces. However, I’m unsure the execution allows for some of the cooler features to really stand out. For example, the skull image on either side of the mask is really affected by the vent holes, I almost wonder if a larger scale image would have given the skull more prominence on the side of the mask. Eyecandy has done white on white before (Tim Thomas) and it’s looked terrific. Perhaps this will look better in the tournament, but I fear that Quick’s World Cup pads and the white USA jerseys will lack the type of contrast to allow the mask to really stand out.

Enroth was a late addition to the Swedish roster for the tournament but there was still enough time for him to get a Team Sweden mask painted by Daveart. Enroth has been going with a very basic look since signing in Los Angeles and that look carried over to this mask. Frankly, I’m not a big fan of it. It’s incredibly basic and there isn’t anything that differentiates it from other masks.

Crawford’s mask slots in last place for me just because it’s so basic. It’s a few Canadian logos with shadows, no depth or detail to the paintjob at all. Truthfully, I’d expect to see this type of design on a mask adorning a Team Canada t-shirt before actually seeing it on a goalie participating in the tournament.