Before we began this venture Jimmy Vesey was still property of the Predators and both Alex Goligoski and Keith Yandle had yet to be moved, let alone signed. That only alters the course for Chris and Tyler so much, which is ideal. Here’s our second piece of how we’d build out the Sabres roster.

Chris Things have certainly changed a bit this week after the Vesey trade. He was going to be player 1A on my free agent list and not necessarily having to wait until August 15 to begin negotiations is a major coup. He’s still a target of mine and would be getting the full court press to secure his signature.

While the circumstances around getting him signed will be a bit more challenging than your typical unrestricted free agent, I do think there are plenty of chips in Buffalo’s favor here. We can all assume Vesey will be getting the max $3.775m cap hit that a rookie free agent can make after all applicable bonuses.

Beyond Vesey I’m looking at two more forwards to shore up Buffalo’s depth. The first is a familiar face: Jamie McGinn. McGinn is expected to see a decent payday this summer as he hit 20 goals yet again and proved to be a very capable contributor in many aspects of the game. He has a good relationship with many of the players here in Buffalo and as a third line left winger, he upgrades Buffalo’s bottom six in a big way. McGinn made $3m in real money last year but carried a $2.95m cap hit. I suspect his asking price will be around $4m but hopefully I can get him signed for less but I’ll call it closer to that four million plateau and say he inks for $3.75m.

That gives me roughly $10m to spend to the cap ceiling (RFA extensions not considered) and only a few players to wrap up. Trevor Lewis is the other forward I’d chase to center Buffalo’s fourth line and provide quality depth both at even strength and to the penalty kill as well. Lewis’ previous salary was $1.525 and I think you could certainly get him at the same price on a two year contract.

Counting Vesey as a free agent, I’ll only make three moves on the open market up front. I have a move to fill in Chad Johnson’s departure which I’ll share shortly. But adding Vesey, McGinn and Lewis rounds out the forward corps and adds a level of skill which wasn’t there heading into last season.

Tyler: The landscape has definitely changed with the acquisition of Jimmy Vesey’s rights, but I agree in that it doesn’t change much in terms of my approach to signing him; I think the Sabres are able to get a deal done.

My primary target on July 1 is Kyle Okposo. He’s just finishing up a deal that carried a $2.8 million cap hit but made $4.5 million in salary in 2015-16. Okposo is another scoring winger that would slide right into the top six for the Sabres, and I think a 5 year deal at 5.75 AAV would be enough to bring him into the fold.

I’m also looking at bringing in someone to center the 4th line. Tops on my list to fill that role is Darren Helm. He’s a solid penalty killer who’s capable of chipping in 30 points a year, and I think a 3 year, $7.5 million dollar deal gets the job done.

On the goaltending front, I’m looking towards Carter Hutton. I’d love to bring old friend Jhonas Enroth back, but I don’t think there’s a fit. Hutton had a solid season backing up Pekka Rinne, and I’m offering a 2 year deal at $1 million per season to secure his services.

Chris: I was split between Hutton and Al Montoya as my choice in goal. Hutton is a strong puck handler and just played his best season as a professional. He’d command somewhere around $1m which is a totally manageable rate. Montoya has been an up and down player during his career, may be asking for a little more than $1m per year. I personally like Montoya’s game a bit more than Hutton’s and there’s only a one year difference.

However, Hutton has been a bit more consistent performer over the last few years and if you can get him for two seasons for somewhere around $1.125, I think you’re doing very well for yourself.

That wraps up my roster. I’m feeling pretty good about where they stand moving forward. By my estimates there is still a little over $10m on my cap to give Rasmus Ristolainen an extension and to re-sign the various restricted and unrestricted free agents remaining on the roster. My forward corps likely lay out as follows:

You’ll notice Justin Bailey getting the nod as the third line right winger. You can count on him, Tim Schaller, Hudson Fasching and William Carrier to see plenty of rotational time between Buffalo and Rochester this year. My hope is the speedy Bailey can continue to adapt to the pro game and begin growing into a strong NHL scorer.

By pushing Foligno and Gionta to the fourth line the opportunity of creating high-quality depth is almost instantaneous. You can rotate Moulson and Deslauriers in as need be based on the lineup you’re looking for.

The blueline is fairly straightforward after acquiring Fowler and pushing Bogosian out via trade, unrealistic as it may have been. Having eight active isn’t exactly ideal but eventually working Reinhart in could make that trade up to fourth really pay off from a Buffalo perspective. Then, of course, you have the fruits of that trade returning to junior for an additional season as you can expect Matt Tkachuk to tear up the OHL once again after his draft year. His development will play in nicely for the Sabres as Evander Kane’s deal expires in 2017-18 and if the decision is made to let him walk, Tkachuk is there waiting in the wings (no pun intended).

Your team seems to be shaping up nicely as well. What’s your depth chart looking like?

Tyler: I opted for Hutton because I thought he’d be a bit more cost effective. I added a 2nd year on the offer as a bit of insurance, Linus Ullmark should be ready to be Robin Lehner’s understudy come 2017-18, but in the event he isn’t I’m still set.

As my roster rounds into shape, the improvements up front are evident. I’m a little tighter to the cap than you, as I have a little under $7 million to lock up Rasmus Ristolainen and Jake McCabe, as well as a few other RFA’s and UFA’s. My roster lays out as follows: 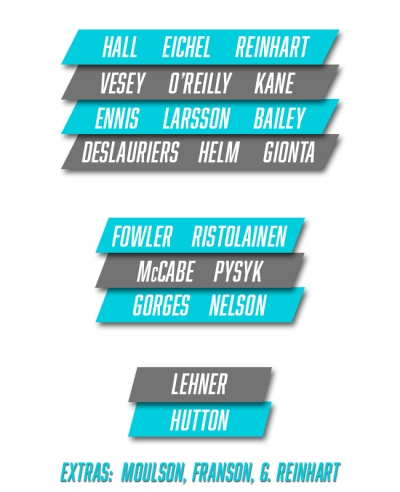 I also opted to give Justin Bailey the first crack at the right wing slot on the 3rd line. He greatly improved over the course of his first pro season, and acquitted himself well in his brief NHL stint and starts the season with the big club. If he struggles there are a handful of players, led by Tim Schaller, that could see time in Buffalo if need be. If Bailey is able to build of his 2015-16 campaign, the trio of him, Tyler Ennis, and Johan Larsson should provide some offensive depth that was lacking last season.
You’ll notice I decided to hang on to Tyler Ennis. While his name has been in the rumor mill for some time, I think his trade value is about as low as it can be. Ennis was hampered by injuries in is first season playing in Dan Bylsma’s system, so he gets another opportunity to showcase the talent that led the team in scoring for two seasons. If he’s not able to I’m sure there’d be teams inquiring about his services, which may be needed at some time due to the extensions that need to be handed out.
The blue line is pretty much a carbon copy of yours. Cody Franson could be used as trade bait at some point, especially if Casey Nelson builds off his late season cameo in the NHL. I also have the Sabres taking a defenseman at 8th overall, and whether that selection be Olli Juolevi, Mikhail Sergachev, or Jakob Chychrun, they’d be best served by another year of development at the junior level. It would also work out well from an organizational standpoint, as whoever is drafted would likely be ready for the NHL just as the contract of Cody Franson is expiring.

That wraps up our journey through Tim Murray’s offseason moves. Hopefully today bears out big improvements for the Sabres. Ideally, Mr. Murray will read these posts and realize the genius in our moves and give us jobs as Co-Assistant General Managers.