The Sabres have an established history of providing replica banners when a number or championship banner goes up at First Niagara Center and they’ll be continuing that trend this year for Dominik Hasek’s jersey retirement. 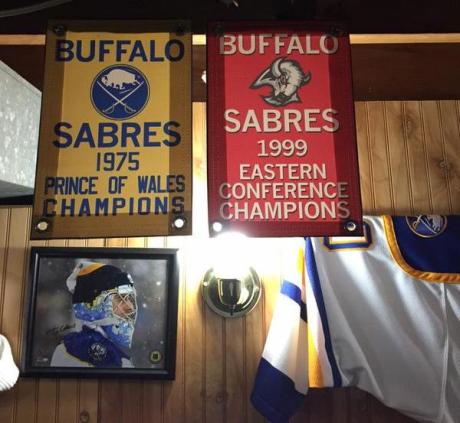 Each fan will receive a miniature version of Hasek’s banner to proudly display in their home or office. While I’m unsure if the banners will be available for purchase through the Sabres Store, you’ll surely get one if you have a ticket. I’m certainly looking forward to being in the arena for that night and I hope to be one of the lucky fans to go home with my own personal banner.

However, that would be the only Sabres banner I own. I was in school for Danny Gare and Pat LaFontaine’s retirement ceremony and I wasn’t present to receive a 1999 Eastern Conference Champions banner or anything else along those lines. I’m a fan of continuity and rather than having one banner, I want my basement to have all of the Sabres banners, within reason.

Since I knew the chances of the Sabres selling sets of banners was slim, I set out to find someone who could produce them for me. I knew the investment wouldn’t be overly detrimental to my wallet, but I was still prepared to spend what was necessary for a quality product. I already have a set of banners in my basement which measure 12×18” and are the perfect size to hang from your ceiling or wall. The price for the three-pack I bought was quite affordable and while the graphics are very rudimentary, they look good. So I went about doing the research to find someone out there who could help me and I landed on an Etsy store that specializes in custom fantasy sports banners.

The gentleman I worked with is named Thomas Lutz and you can find his shop on Etsy, it’s called Primetime Banners.

I placed an order with Thomas for a 1975 Prince of Wales Champions and 1999 Eastern Conference Champions banners just to get things started. Both commemorated the Sabres’ trips to the Cup Finals and would also give me a good example to decide if I wanted to order seven more banners for each of the Sabres’ retired numbers. Safe to say I’m ready to place my next order.

Thomas’ work is terrific. Each banner is 8×12” and they were created off basic images of the banners hanging at First Niagara Center. As the image shows, each banner has grommets in the corner so they’re easily hung. I paid $50 for the two banners and I’m currently working with Thomas on a final version of each retired number along with the commemorative French Connection banner that hangs above the three.

After consulting with Thomas, he’d love to hear from more fans who would like similar products made. He’s very talented and the turnaround time on his work is minimal. I’m looking forward to getting each of Buffalo’s retired numbers hung in my basement to go along with the two newest additions to my Sabres memorabilia collection.