You may have heard that Cleveland has been on a bit of a run lately. Similar to Buffalo, Cleveland has been working to reinvigorate their downtown core and much of their work is paying off as the 2016 Republican National Convention will descend upon the burning river. 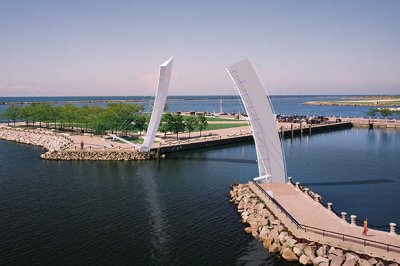 Much of what’s happening in Cleveland, however, is working to shake the opinion that it’s a rust laden burg with little to offer. In fact, the city planning in Cleveland over the past 30 or 40 years wasn’t nearly as bad as Buffalo’s which has given our Ohio cousins a bit of a headstart when it comes to revitalization. Cleveland is on the brink of adding countless new projects to their books that probably would labor in public hearings and subcommittees in Western New York for months (if not years) before dying on the vine or being drastically scaled back before construction.

For example, Cleveland will soon be home to a gleaming 28-story Hilton hotel tower that will connect with their convention center as an anchor for major national and international conventions. Buffalo’s bunker of a convention center is so far obsolete that any such hotel project would be a non-starter, but I can hear the cries from Donn Esmonde and his cronies about the lack of architectural integrity and historical consideration based on the sleek tower’s design.

Buffalo does have plenty to brag about. HARBORCENTER will be hosting games and serving up food at (716) before the month is over, the Embassy Suites anchor one of my favorite buildings in Buffalo and the Delaware North Tower is rising at an incredible clip. So don’t mistake consternation over Cleveland’s success for ignorance of everything great happening in Buffalo. In fact, Buffalo’s civic leaders ought to lift a page right out of Cleveland’s book.

One of the many projects that are working towards completion in Cleveland is a 143-foot pedestrian drawbridge that will connect portions of Cleveland’s lakefront. As the picture above shows, this is a visually pleasing bridge that will provide direct pedestrian access to an otherwise difficult to reach location. Sound familiar?

Buffalo will have a neat and convenient ferry that will shuttle people and bicycles from Canalside to the Outer Harbor in quick trips that will reduce or eliminate the need to even trek down a newly renovated Ohio St.  With the long-term plan of putting an at-grade bridge across the Buffalo River, why not look into a pedestrian bridge like the one above as a compliment to everything else that is being worked on?

The project cost of the Cleveland project is $5.5 million. That’s not small potatoes. Considering that any span across the Buffalo River would be nearly three or four times the length and the bridge would need to draw high enough to allow the lake freighters through as well. The easiest location would be to connect across near the end or Erie street or even at the mouth of the river across to the lighthouse walkway.

Unfortunately the shortest span would be at the mouth of the river and even that length would likely far surpass the $5.5 million price tag of the Cleveland bridge. I could see that making this a cost-prohibitive project. But maybe a bridge, combined with the new ferry and a renovated Ohio St., would buy more time for a vehicle bridge at the inner harbor. Maybe it’s simply time to strike out and add another signature item to our bustling waterfront.