If you read Paul Hamilton’s post on WGR 550 today you may have noticed the bevvy of players he referenced. A great many of those were selected in the first two rounds of the draft (as he mentions). After reading his post I wanted to find a way to illustrate exactly what the Sabres hold from the actions they’ve taken over the last few years.

That’s a long look at the organization as anyone selected since 2008 are beyond prospect status at this point and there’s no way to tell what Tim Murray’s strategy will be with the pick he possesses between this year and next. It’s a safe bet to say that he won’t sacrifice any of the three firsts he holds next year with his only course of action regarding the 2015 first round being to obtain more selections.

A pair of picks that I’m very interested in are the two at the top of this year’s second round. Buffalo holds the first pick of the second round (31) and Winnipeg’s selection (39)thanks to the deadline day trade of Matt Moulson. They’re high second round picks in what is considered a weak draft, so they may not carry all that much weight. I also think that targeting Thatcher Demko with the 31st pick could be a direction the Sabres go. I’d also be interested to see if either, or both, of those picks could be used to sweeten the pot on a draft day hockey trade if Murray is able to find a dance partner.

What I think is important to keep in mind about this – Hamilton touches on this when he refers to how envious other organizations are of the Sabres – is that the doom and gloom surrounding the state of the organization is somewhat misplaced. The Sabres have a ton of assets and while those selected prior to 2010 may by closer to veteran than prospect status, the organization’s roots run deep. This is not a team that has been spread thin by buying rentals and temporarily patching weak spots. While the holes in the current roster run rampant, the framework to fix them are in hand and will start to be acquired as soon as June 28.

As I said, I wanted to illustrate the arsenal of high picks and assets Hamilton mentioned in his post. The fun starts at the draft in Philly and will continue through to next season. If used properly, the assets listed below could significantly speed up the rebuild. 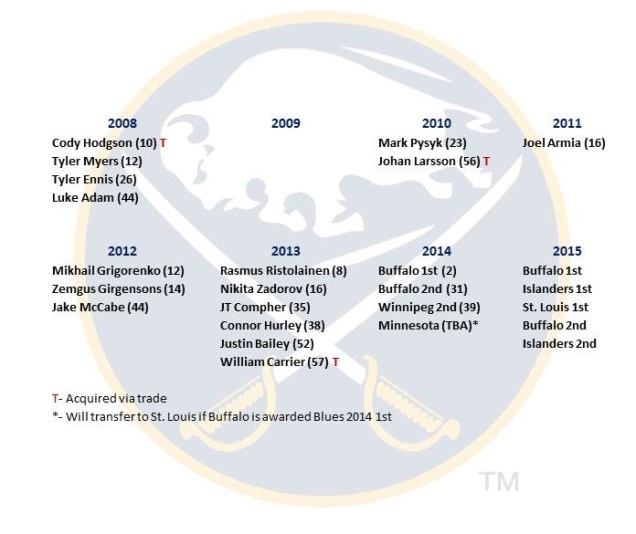