The Olympic trade freeze will lift in two weeks and the ten days to follow will be filled with a flurry of rumor mongering and transactions as the NHL trade deadline nears.

Tim Murray is going to be more than a little busy both during and after the Olympics as he maneuvers to swap some of the talent on his roster as he continues to steer the Sabres rebuild. It’s no secret that his primary focus will be on his trio of pending UFAs with Ryan Miller’s status being of the utmost interest to observers.

The end game with those three is all but decided. They’ll be sold off to the highest bidder with Murray attempting to net at least two assets in return for each. In the case of Miller, the asking price will likely begin with four pieces and could end up at three or two depending on what the market bears.

I feel that the Sabres are nearing a stage in which picks will not benefit them as much as prospects or players who are nearly NHL regulars. While first round picks are obviously valuable currency, the stockpile the Sabres have been going through should allow Murray to be creative with some of his non-first round picks. 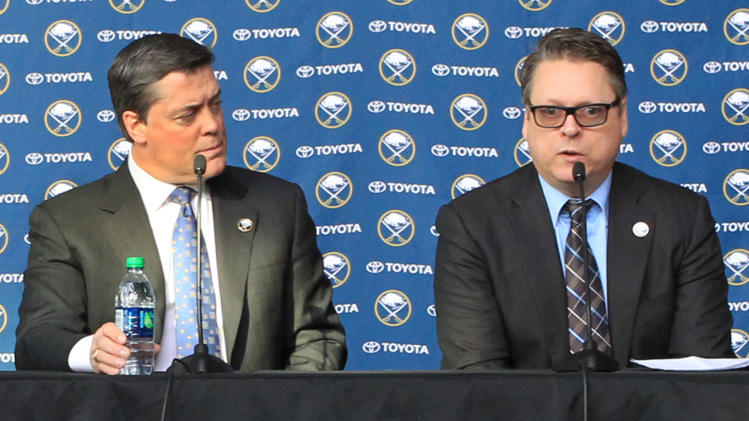 Additionally, I’d be in full support of Murray extending some of Buffalo’s younger talents to the trade market in order to make a hockey trade or two in the coming months. This particular strategy being available as an option to him both between now and the deadline and leading up to the draft and summertime.

Rolling additional picks into the potential deals involving Miller, Moulson and Ott is a strategy which could not only put a trade over the top, but provide the Sabres with the net they were seeking in return for their trio of UFAs. While a second round pick is nothing to scoff at, it’s a selection the Sabres could arguably survive sacrificing given the assumed return for each of the three rentals includes a first round pick in the coming drafts. If the Sabres exhausted three second-round picks between this year and next in order to add three more first round picks (in addition to the Islanders pick they already own) would there be any complaints? Consider that adding that second round pick could also bring more back in terms of players and it seems like a no brainer.

For example, if the Coyotes wind up as the front runner for Moulson and Murray is trying to pluck a 2015 first and a prospect like Henrik Samuelsson or Max Domi (a tall order) why not toss in a second round pick or perhaps an additional piece to balance the trade and grab the return you’re seeking?

The same goes for Miller and Ott, maybe less so for Ott simply because a first round pick in return may be his ceiling but I’d assume adding a pick or prospect to a deal involving Miller would boost the value of that trade quite a bit. Putting names to a deal for him might be silly, but if Charlie Coyle or Ty Rattie are high on Buffalo’s list, it would be wise to find a piece to include along with Miller to ensure that a player like that comes back the other way.

What exactly the Sabres will net from moving Miller, Moulson and Ott is anyone’s guess. There’s a chance that at least one of them remains on the roster once the deadline passes. However, if there are two top prospects and three first round picks as the return, I don’t think the Sabres will feel as if they missed out.

Another part of what I’d like to see from Murray at the deadline and heading into the draft is a willingness to use the depth that he does possess to leverage a hockey trade or two that would target areas of organizational weakness.

The Sabres are deep on the blue line. Really deep. Christian Ehrhoff, Tyler Myers, Mark Pysyk and Brayden McNabb are all NHL players today while Rasmus Ristolainen, Nikita Zadorov and Jake McCabe are all prepared to take the next step in their development and that could very well take one or two to the NHL next season. That means that the Sabres are not only rich in blue chip defenders, but they’re nearing a point where one or two will find themselves as the odd man out.

While I’m not a proponent of pillaging a position of strength, moving one of Buffalo’s promising defensemen to a team in need of help on the blueline wouldn’t do much damage to the overall depth of Buffalo’s defense corps.

Each player is moveable or untouchable in their own right. Some are likely more untouchable than others, while some may be harder to find a market for. Christian Ehrhoff is a great example of the latter as his cap recapture makes his contract difficult to move despite the very friendly cap hit.

Ultimately I’d like to see Murray try and target a top-six forward (preferably a center) by dangling one of Buffalo’s many defensemen. Perhaps even bundling one of the defensemen with a forward – an NHL roster player or prospect – along with a pick to not only sweeten the pot but to possibly find a more valuable forward in exchange.

Which teams to target would ultimately come down to Murray’s discretion and how things were bearing out on the market. While this may be an easier trade to swing at the draft, I certainly feel that the right package of players could draw attention to a competitor or bubble team looking for a slight shakeup or late upgrade for their stretch run.

Think of teams like Vancouver or Winnipeg. Both are scratching to maintain positioning in the Western playoff race as teams to at least reach out to. Perhaps Colorado would entertain adding another top-four defender (in the case of someone like Myers) to help put them over the top.

Myers, as it turns out, is the player I keep coming back to in terms of the player I’d offer up first. Picking one of Ristolainen or Zadorov to augment a package with a rostered forward could be an option, but I’d rather wait at least another year before making any decisions on those two. McCabe probably slots in right behind Myers, in my opinion, of a guy I’d be dangling in a package to try and acquire help within the top-six. Of course, McCabe would likely come as a compliment to a deal involving one of Buffalo’s forwards whereas Myers would be the key cog with a pick or a forward prospect accompanying him to a new franchise.

Who exactly is worth targeting – and more importantly, who is able to be had for that price – is difficult to pinpoint. There are whispers that Evander Kane is on the block in Winnipeg. It’s certainly possible that Ryan O’Reilly’s contract negotiations get hairy again this summer, there are a host of players out there who would instantly upgrade Buffalo’s top six. Now, could Kane be had for Myers, a top forward prospect and a pick? Probably not, but that’s the type of trade I’d like to see the Sabres explore; a trade that would see them leverage their depth on the backend to bring in a cornerstone to immediately improve their depth up front.

Exactly how the chips fall in the coming weeks is impossible to predict, but I’m confident in my expectation that each of Miller, Moulson and Ott will be in a new city and at least one other Sabre that hasn’t been discussed nearly as much will end up on his way out of town.