Now that the NHL’s final four (and last four Cup champs) have advanced to the Conference Finals, it is time for another edition of playoff picks. While I was a respectable 6/8 in the first round, I only managed two correct picks for the four second round series. While 50% is great in baseball, it isn’t all that fantastic considering the picks I made.

The Conference Finals pretty much have the exact four teams most expected to see when the playoffs first opened and these four favorites certainly haven’t disappointed. Maybe Los Angeles wasn’t expected to advance to this point, but the other three were certainly penciled in.

An Iginla Sweepstakes grudge match pitting the juggernaut that is the Penguins offensive machine and the Bruins bruising style. While depth and overall talent favor the Penguins, goaltending and physicality certainly favor the Bruins as the series is set to begin tomorrow. I feel that the fate of this series will be controlled by the Penguins, but not in the way you think.

Should the Penguins allow the Bruins to impose their will and outmuscle the impressively talented squad, the people of Boston will be looking to plan another Stanley Cup parade. However, if the Penguins can control the play and build early leads, the Bruins physical style will need to take a backseat.

Why Pittsburgh will win

The Penguins appear to be much healthier than the Bruins entering this series. The depth up front could pose serious problems for Boston’s wounded blueline considering the Pens have the ability to ice two crazily talented trios of forwards who can basically score at will. Pittsburgh needs a strong outing from Tomas Vokoun but I’m certainly confident in the fact that this unit can outscore any team in the league.

Why Boston will win

Physicality will be the name of the game for the Bruins. If they can bump and grind the Penguins’ top two lines they’ll certainly have plenty of success in stifling the creative juices that power Pittsburgh’s engine. Tuukka Rask is definitely the most skilled goaltender in the series but I’m curious to see how he holds up against such a potent attack. 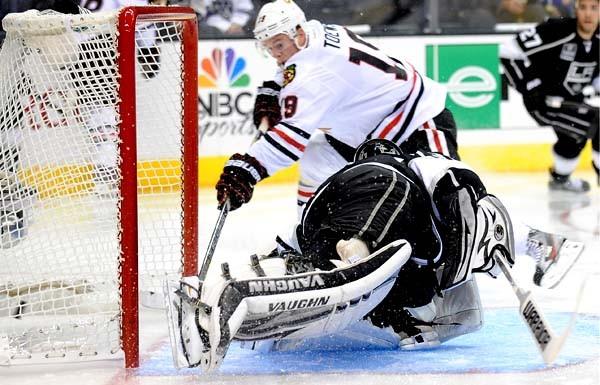 This series interests me because of the potential it holds. It simultaneously holds the potential to be a high-flying, high-scoring series between two talented units. It also has the ability to be a low scoring affair with little action and measured attacks. While the former is exciting to think about, the latter is more likely.

The Kings will need to keep playing their lockdown style against a team with so many weapons if they hope to move forward. However, they do have a decided advantage in net.

Why Chicago will win

The Hawks have a deep roster and have been getting great goaltending along the way. Although Captain Serious hasn’t blossomed at this point he represents a portion of Chicago’s seemingly never ending attack. If the Hawks can get one line going, they will be in terrific shape in moving forward.

Why Los Angeles will win

LA will have a punchers chance if they make sure to completely neutralize one of Chicago’s two scoring lines. Whether they focus on Kane, Sharp, Hossa or even Toews the key will be to make sure one of those two lines are silent. If that is the case, LA’s lockdown style should thrive. They will have little trouble protecting small leads. One thing that I can’t see lasting is their desire to score two goals each night.