The Buffalo Sabres are facing a daunting task, needing to win nearly every game down the stretch to sneak into the playoffs. It is going to be that much harder with games against Pittburgh and last night’s victory over the Rangers. 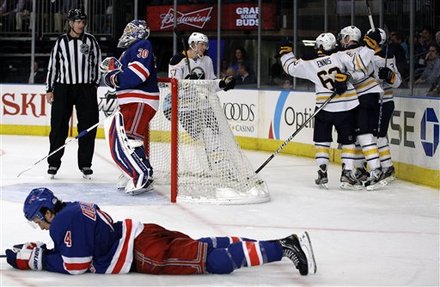 However, the Sabres kept scoring goals and cruised to a 4-1 victory over the East’s best team and the odds-on favorite for the Vezina. Even though Buffalo didn’t get the help they needed in Washington, they remained tied with the Caps.

The Foligno, Ennis, Stafford line was on fire yet again, scoring three of the four Buffalo goals. The Regulators combined for three goals and eight points. However, the Vanek, Hodgson, Tropp line was effective yet again, despite not finding the scoreboard. I really like the makeup of both of those lines. Combining the scoring skill of players like Ennis, Stafford, Hodgson and Vanek with muckers like Foligno and Tropp has been paying dividends. It would seem like Darcy Regier’s commitment to size in recent drafts has begun to pay dividends.

Ryan Miller had a very strong showing yet again, he stopped 26 shots and made a number of big saves to keep the Rangers attack quiet. The Sabres had a strong game all around, there wasn’t much to frown about across the board. Maybe I don’t like the fact that they gave up 13 shots in the third period, but they managed to turn the Rangers aggressive push into a pair of odd-man goals to seal the game.