Even after losing two of their larger, tougher players, the Buffalo Sabres had plenty of grit left in the tank for last night’s game against the Anaheim Ducks. 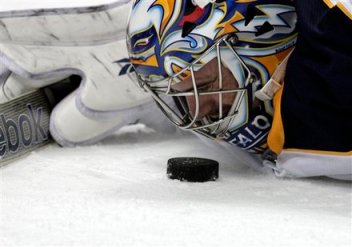 AHL call-up, Corey Tropp, had yet another respectable scrap and brought plenty of jam along with him from Rochester. Tropp has been mighty impressive in each re-call he has had this season, I’d expect him to be a mainstay on the roster from this point forward. Mike Weber and Robyn Regehr each dropped the gloves while Pat Kaleta and Tyler Myers were right in the middle of a liney at the horn. Who says this team will miss Paul Gaustad?

In all seriousness, Buffalo showed some serious heart in the toughness department. They didn’t have the one player who typically brought the most sandpaper to the lineup. It is something that will need to be found in the near future. I don’t think the league’s smallest team will succeed well in the playoffs. That being said, Tropp and Kaleta certainly showed that they have enough jam to insert on the front end, while guys like Weber and Regehr play with plenty of edge defensively. So long as that aspect isn’t ignored by those players, the loss of Guastad and Kassian won’t be as noticeable.

Ryan Miller certainly proved his play elevates when he is motivated. Whether it was because he was heading home to this or because he is still pissed about losing his buddy and best defensive forward, Miller’s game was on yet again. He turned aside 43 shots for the shutout victory. According to Ian Ott of the Sabres, that is a franchise record for saves in a shutout.

Buffalo heads up the coast to San Jose for today’s game. It will be another late start in Buffalo but the game represents two more pivotal points. While the massive road losing skid in December and January is one defining moment of this season, this road trip could be what turns the year around.