Two points go in the win column tonight but the Sabres only enjoyed a one-point improvement in the standings. Buffalo played two dominant periods of hockey before hanging on for a 2-1 victory over the Islanders. 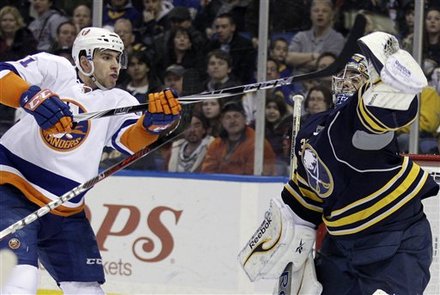 The trade deadline is fast approaching and teams that sit on the playoff bubble are nearing the point where they need to decide if they’re contenders or pretenders. The Sabres will need help for a while longer if they are to climb into the eighth or ninth spot in the conference.

However, more performances like tonight will certainly help matters. Ryan Miller was brilliant yet again in goal, turning aside 30 of 31 shots and the Sabres received another smart performance from Tyler Myers along the way.

The obvious problem of not having the “right” players still exists. It appears that teams who remain in the hunt but realize their shortcomings are beginning to sell off pieces. The Sabres certainly fall into that boat, but have plenty of skill on the roster that may just need the right amount of glue to get them on a playoff run.

Frankly I see too many issues that need to be addressed before the Sabres are capable of making a true run in the playoffs. They could certainly get the ball rolling at the deadline and carry that momentum into the off-season. In the meantime, their push towards eighth will be an uphill battle and they will need those above them to stumble along the way.