After another brief run of losses, the Buffalo Sabres responded. In front of a (sort of) national audience, the Sabres hung six goals on the Pittsburgh Penguins on their way to a 6-2 victory. 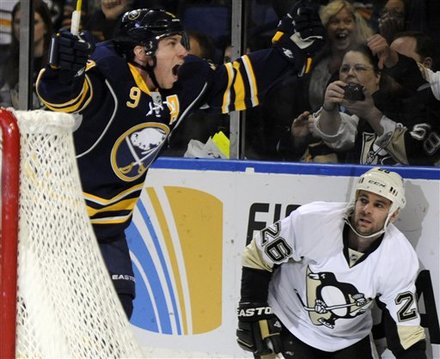 Buffalo had dropped four-straight after piecing together a solid run that had some thinking they were capable of salvaging some portion of this season. A few dismal efforts and one blowout all but squashed that type of thinking. Yesterday’s win was one of those, “where has this been?” type of games.

Derek Roy, Jason Pominville and Christian Ehrhoff each picked up three points and Ryan Miller stood tall for his team all afternoon, stopping 24 of 26 shots.

For once there was goal support for the goaltender and goals came from both the top line and role players. The Gaustad/Kaleta/Gerbe line was brilliant and they were rewarded with the game winning goal. Ville Leino and Zack Kassian were fairly unnoticeable but each nabbed an assist. Of course Pominville continued to prove Lindy Ruff right regarding the captaincy with another MVP effort.

While this game may only prove to be evidence for trading certain pieces – Paul Gaustad won 16 of 23 draws and scored the winner – it was a refreshing reminder that the Sabres aren’t necessarily the worst team ever assembled. Sure, there are some flaws on this roster that need to be addressed. But there was promise in this season before everything hit the skids. While 2011-12 may be lost, know that with a few moves the 2012-13 team will be solid.