Thinking back to January and February of 2011 would likely bring joy to most Sabres fans. January involved the coming of the World Junior Championship, the thick of the Pegula-mania rumors/reports and the beginning of Buffalo’s turnaround. 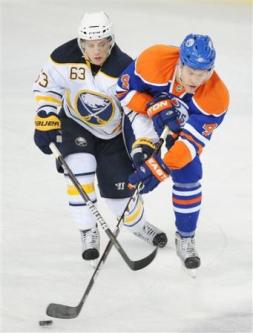 February was even better. The Sabres were in the thick of a magnificent run that carried them to the playoffs, Pegula’s ownership was formally announced and it seemed as if the sky was the limit. The month culminated with a trade deadline acquisition that would have been foreign in years past. Brad Boyes was the cherry on top of two glorious months, his contributions fueled Buffalo’s surge, despite the fact that he tailed off since the end of last season.

Now the Sabres are faced with a similar predicament. Buffalo currently sits five points out of fifth in the East (with one game in hand) and have suffered a terrible run of poor hockey and injuries. Their first chance to crawl from their grave comes this evening against a young, talented Edmonton squad.

The Oilers have slid deep into the bottom of the Western Conference themselves, but they posses the lethal ability to strike at any moment. Something this Sabres team seems to lack. The Edmonton roster makes Buffalo’s look geriatric by comparison. Their scoring lines also pack a bit more punch than do the Sabres’ (particularly past the top line).

For Buffalo, establishing a three-period effort will be vital. Asking any team, particularly the Sabres, to play 60 minutes is somewhat unrealistic. But putting forth a quality three-period game, with only a few minor lulls, would certainly register two points for the Sabres.

It is time to stop pulling punches in net. Neither Buffalo goaltender has done much of anything lately. Ryan Miller, despite showing some signs of strong play, can’t keep less than three goals from getting behind him. Jhonas Enroth played a fine game on Saturday and gave his team a chance to win. Sadly, he folded in the shootout. Nevertheless. Enroth clearly is the better of the two goalies at this time. Ruff should ride him for a handful of games to see what he gets from the rookie. The points are too valuable to waste juggling struggling goaltenders.