The Buffalo Sabres’ second-straight loss to the Tampa Bay Lightning consisted of numerous similarities to their first home loss of the season. 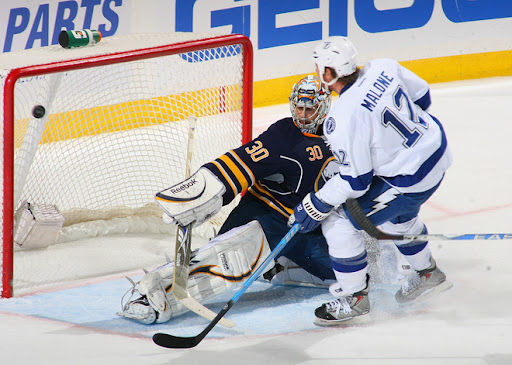 Buffalo jumped the Lightning early. Thomas Vanek continued to exert his will upon the goaltenders of the NHL with a beautiful takeaway and finish on a short breakaway. Brad Boyes followed up 35 seconds later with a neat finish that involved just about everything Lindy Ruff has been looking for out of the enigmatic winger; put the puck on net after driving the crease hard for a loose puck.

There was little to complain about after the first 10 minutes of the hockey game for the Sabres. Then the wheels fell off. In nearly identical fashion in which the Sabres allowed Carolina back in on the October 14, Buffalo allowed the Lightning back into this game. Short of gift wrapping countless shorthanded opportunities, the Sabres played sloppy hockey and failed to clamp down on the collective throats of a downtrodden Lightning team.

Rather, they watch as Tampa Bay’s two veteran superstars connected for a rebound goal to draw within one and then fell victim to a terrible bounce with under one minute to play on the tying goal. Buffalo was unable to regroup in the second period, allowing the go ahead tally on what appeared to be another unfortunate bounce.

Ryan Malone’s late breakaway goal may as well have been Jeff Skinner’s game-winner as it was not only a goal you wish Ryan Miller would have saved, but it was a goal that probably wouldn’t have transpired. After making a deft move in the offensive zone, Tyler Myers had his shot blocked and ricochet to Malone who went in and beat Miller. Miller didn’t play the breakaway particularly well and was beaten on a fairly simple move, one he typically turns away.

Having both home losses play out in such similar fashion is less than encouraging for a team that had to wait until November for their first home victory. Neither loss could fall under the “trying too hard to entertain the home fans” banner. These were two poorly played games that saw the effects trickle down from the forwards to the goaltender.