Jim Tressel stepped down from his position as the head football coach at Ohio State this weekend after an avalanche of bad press and violations buried the program. 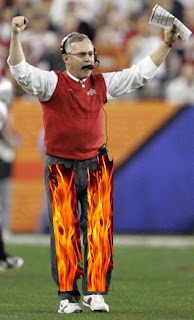 Some reports note that Tressel was asked to resign, an assumable point considering the allegations against the program. The rocks started falling when Terrelle Pryor and other OSU players were caught trading merchandise for tattoos before the Sugar Bowl.

The NCAA made a huge mistake and showed terrible favoritism and far too much bias towards saving TV ratings rather than dropping the hammer like they would have with New Mexico, Washington State or Rutgers. They suspended Pryor and the others for five games of the 2011 season. Of course, OSU makes sure to fill 3/4 of their schedule with cupcakes before opening their Big Ten schedule. Not to mention, they really only have two meaningful games each season. So those suspensions would mean nothing. The Buckeyes backups will beat Akron and Toledo. Long story short, the NCAA scolded the Buckeyes, no more than that.

Now it seems as if Terrelle Pryor is doing his best “Blue Chips” act and stirs up some thoughts of a history of violations. It wouldn’t surprise me if Pryor had some of the same action Cam Newton had going with Mississippi State (probably Auburn too).

Jim Tressel seems to have ruled over a reign of ignorance to NCAA rules. It was right that OSU forced him out. It is an embarrassment that this has gone on so long. I can only hope the NCAA drops the hammer on the program. The problem most certainly did not end with Tressel. Terrelle Pryor should never play another down of Division I football and the Buckeyes should lose at least 50% of their scholarships for the next four seasons. Maybe it is a little harsh, but that is what needs to be done.

Sure, the Big Ten will go down in flames. Michigan is already average and the last remaining power completely screwed the pooch. I have always seen the Big Ten as the weak sister of the BCS. Don’t worry, the Big East is the redheaded stepchild. The Big Ten has been backsliding for a few seasons. This bombshell will probably drop it on the same plane as the Big East.

The Big 12, Pac-12, ACC and SEC will have to carry the torch as the power conferences for the time being. The Big Ten and OSU will be playing in the shadows until 2015, at least.